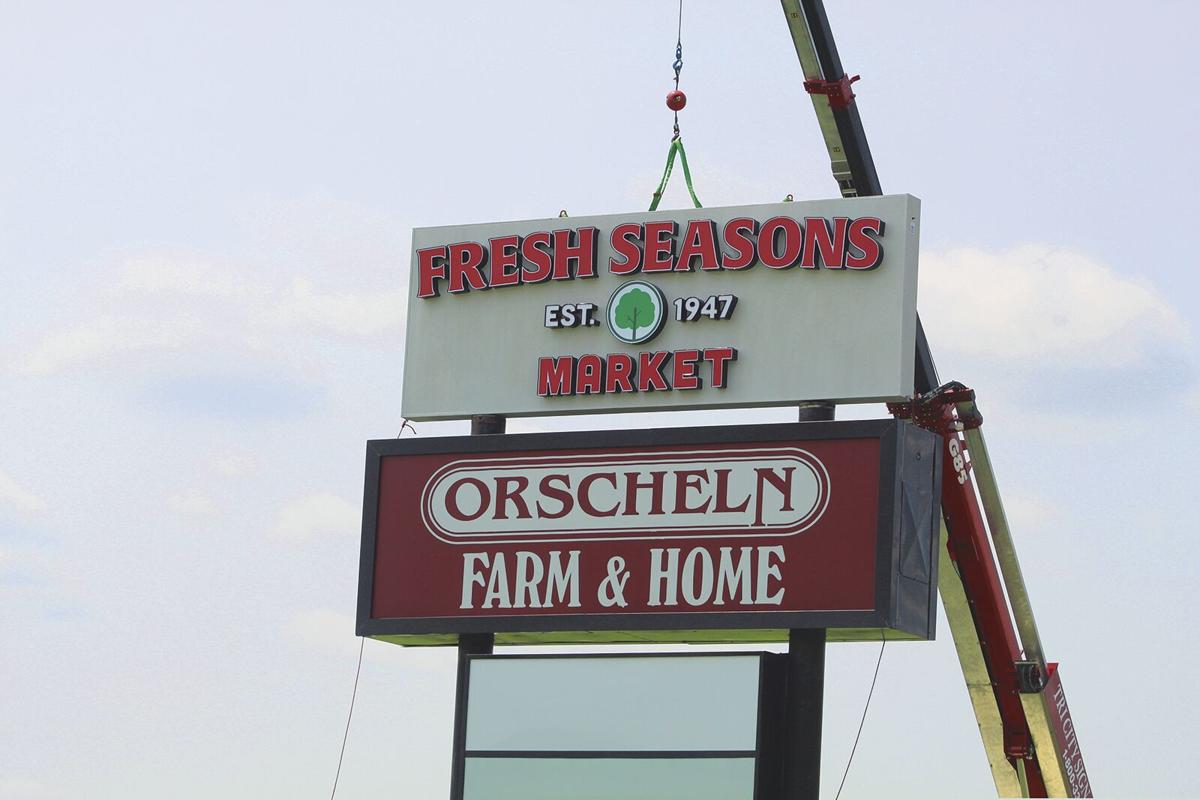 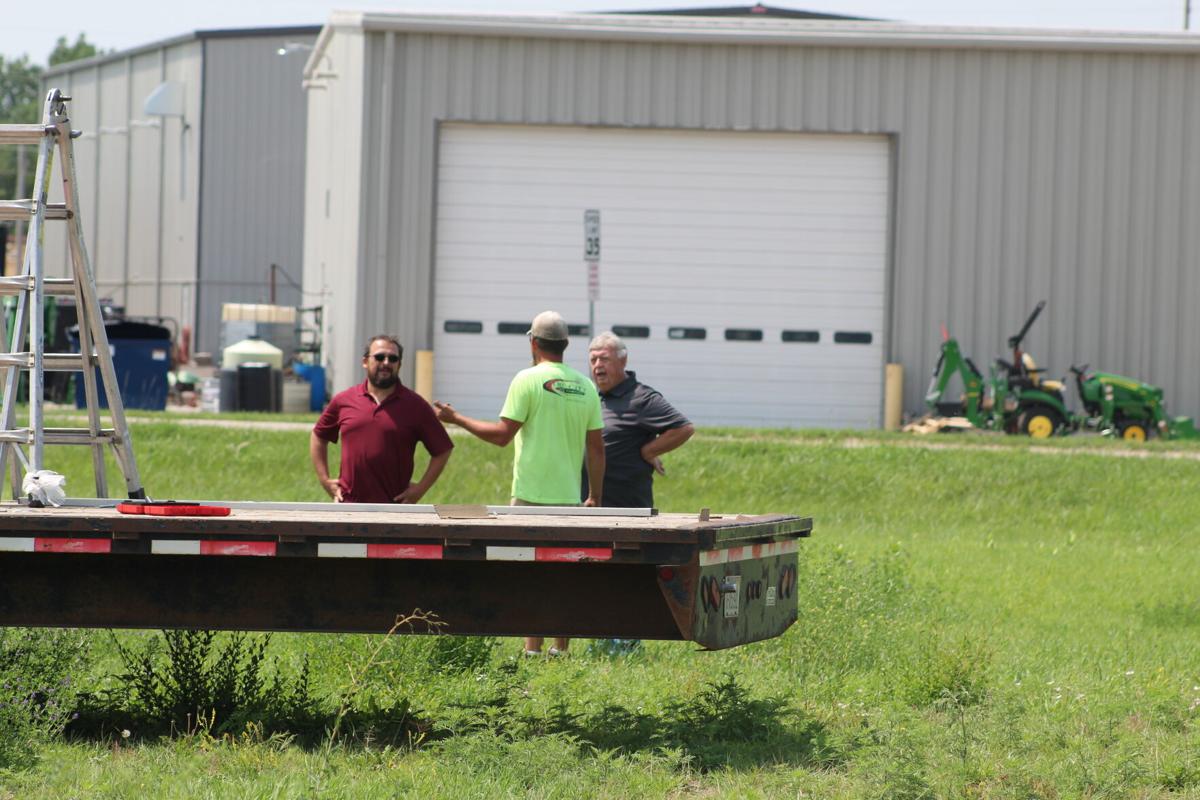 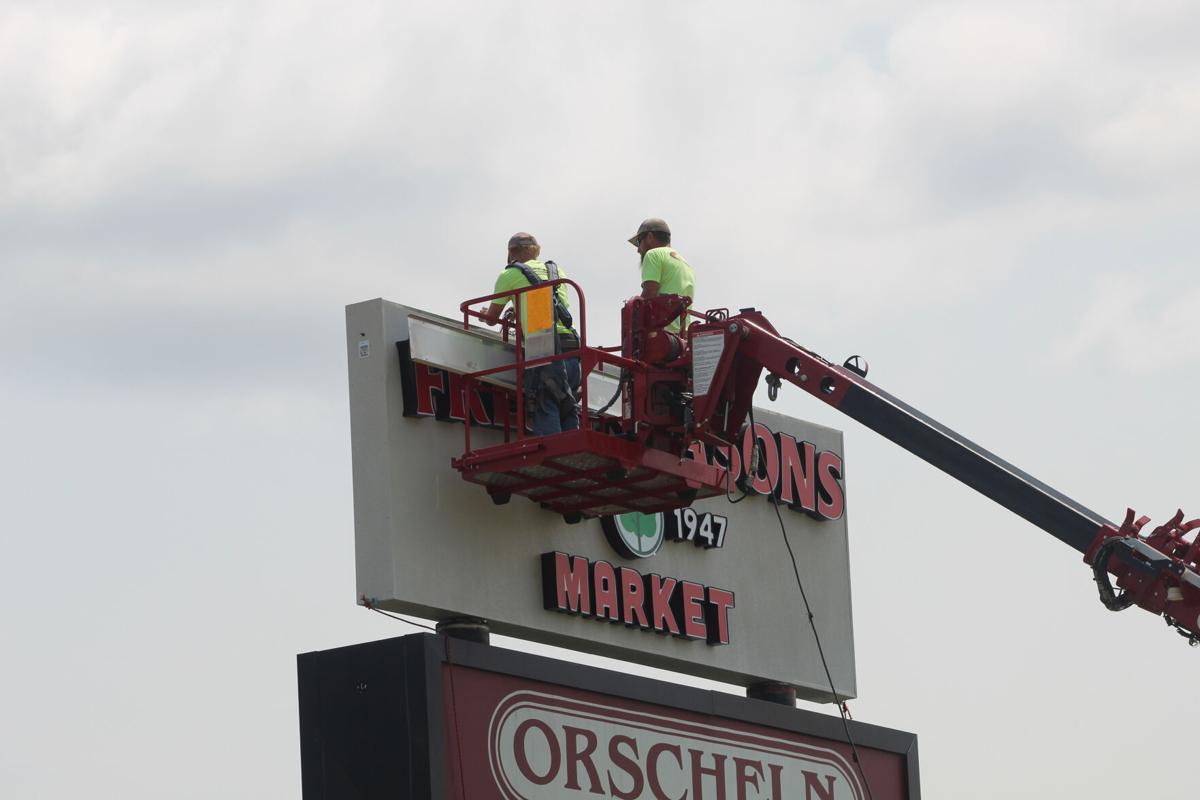 Workers take some time to get the wiring in place to ensure that the lighting in the sign is ready to go. 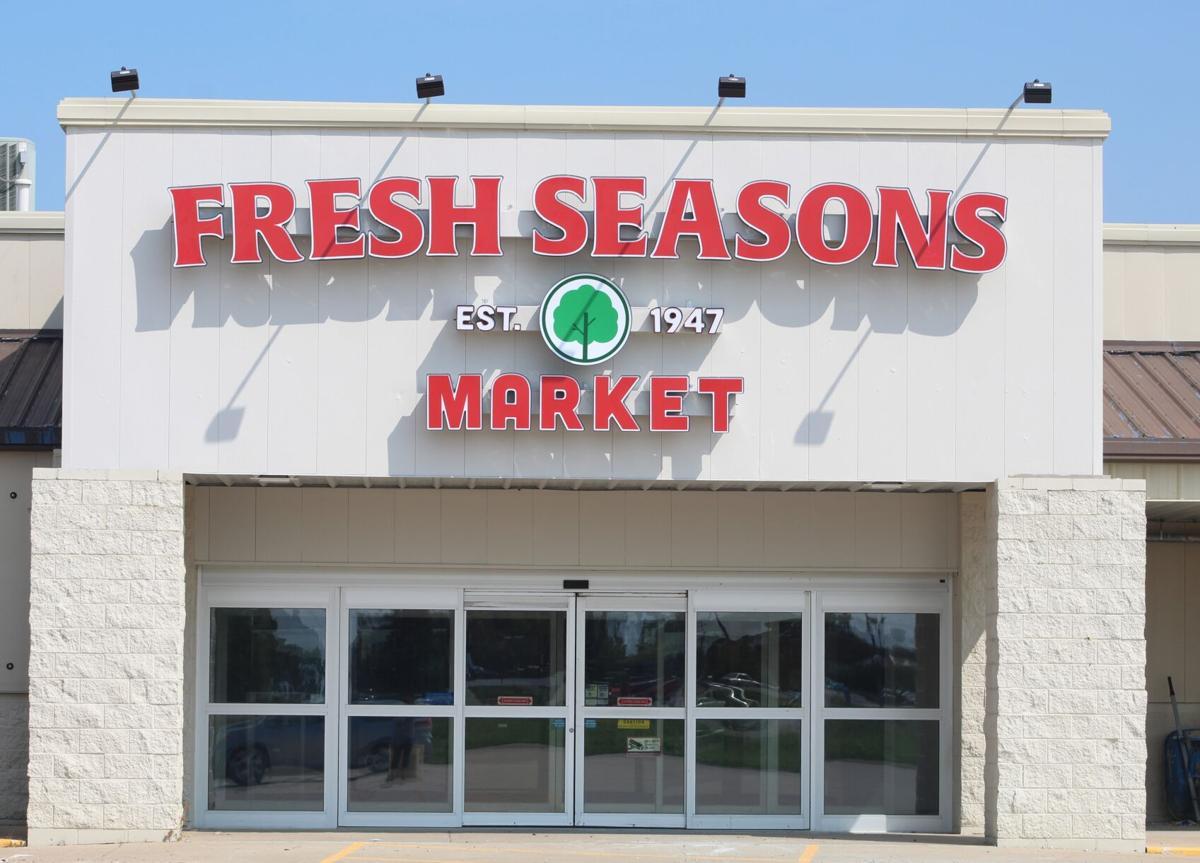 Signage went up on Fresh Seasons Market Tuesday afternoon, another step towards the new grocery store opening in August.

Workers take some time to get the wiring in place to ensure that the lighting in the sign is ready to go.

Signage went up on Fresh Seasons Market Tuesday afternoon, another step towards the new grocery store opening in August.

“We are oh so close!” That was the sentiment shared by Blaine, Steve and Michael Peterson as they looked around their new grocery store. Brand new coolers have been installed, shelves are being stocked, new lighting is in and the floor is being waxed. And this week one of the biggest pieces of the puzzle was revealed - the name!

A big sign proudly displaying the name Fresh Seasons Market has been hung on the front of the former Shopko building, and the Peterson’s said they couldn’t be more excited for the next chapter of their family’s legacy in Gothenburg.

While work is transpiring on the new store and anticipation continues to build, the Peterson’s do want to encourage their customers to remain patient during the transition. “Customers will begin to notice the other store start to dwindle down its inventory. We do have to build up inventory here while we start to let it go down over there, because it is just logistically impossible to be open there one day then close and bring everything over and open here the next day. It just can’t happen,” explained Michael Peterson.

“But we don’t want to leave the town without a store,” Steve Peterson added. “Three times a week now we are bringing in items to the new store.”

They explained that the plan is to take three of the coolers from the old store to the new store, and the meat department will be one of the first stations to change locations. Product is already being moved to the new location from the liquor department as well.

“Just know that this might be a bit of an inconvenience but that we are going to be opening a brand new store that is going to be a big step forward,” said Michael.

As for the name of the new store, Blaine, Steve and Michael said a lot of market research went into developing that name and brand. “We understand there are certain words and ways you want to frame your business, and in this location we are going to be closer to the interstate. Research shows there are certain buzzwords to catch people’s attention as they are driving by,” Michael explained. “Peterson’s Supermarket has been an amazing name for us, and we are still the Petersons and doing business as the Peterson family. But we see this as a big transition for us, and with that change is a fresh start. With that idea in mind we wanted to have a name that reflects that feeling and also reflects the information we learned through our market research.”

The “fresh” in the name, the Petersons said, represents the fresh start for the new store. The “seasons” is representative of the great state in which we live. “There is no doubt about the fact that we have four very distinct seasons in this part of the country and that is something that the grocery industry can relate to. We change things up - you’re going to see new products on the shelves every season,” said Michael. “And it’s always going to be fresh.”

Though all of the research indicated that the new name was a solid choice for the store, the Petersons said they wrestled with it for some time. The Peterson family has had a grocery presence in this community since the 1940s, and Steve said from a corporate point of view they will still operate as Peterson’s Supermarket. He said the new sign maintains that family connection by including the Peterson name below the new name.

“We fully expect that many people will still write their checks out to Peterson’s, and that is just fine,” said Steve.

“It started out with my grandfather and my father, Blaine, as a processing place,” Steve explained. “After the war nobody had freezers so they opened up Peterson Lockers. Then as people started getting freezers they needed the locker less and less, so they discovered they had room to put something else in. So they put in a meat counter. Then they had a little more room so they put in a few groceries. And it just grew.”

Steve said when the store first moved to the Safeway building it became Peterson’s Grocery. The name was changed to Peterson’s Supermarket in the late 60s or very early 1970s. Like Blaine and his father Oscar, then Steve and his father, Steve and his son Michael are continuing the family business established more than 60 years ago - and giving it a new chapter.

“The first time it changed location it changed names. And now that we are again changing locations we’re changing names,” said Michael. “And yes, some of that is because of market research. But some of it is because we see it as a brand new opportunity - a brand new chapter. But there’s no doubt about it, we wouldn’t be where we are right now without the opportunities that Peterson’s Supermarket has presented to us and that the family business has made for us. We see this as a step forward. When you come to this store you are going to find a Peterson working. We see this as a new chapter - not a new book.”

Both father and son said that having the extra space to expand and offer Gothenburg more is very exciting for them. “And we hope Gothenburg feels that same excitement. We wouldn’t be doing something like this if we weren’t proud of where we are from and the legacy our family has had as business owners in Gothenburg,” said Michael.

The target date for the opening of Fresh Seasons Market is Aug. 18. The Petersons said they plan to keep Peterson’s Supermarket open until the day before they open the new store. Both men are leery about naming a date and shared that all it will take is a delay with construction or the arrival of equipment to change that. “But for the past few weeks we have been aiming for Aug. 18 as our day and we are doing our best to make that happen.”

The pharmacy will not be open at the time of opening day of Fresh Seasons Market; however, the hot and cold deli, pizza, sushi and chicken program will all be ready to go. The meat department will be expanded at the new store and the Petersons are very excited about the opportunity the extra room will present for the three meat cutters on staff. With a bigger store comes the opportunity for more employees, and Michael said the store is looking for staff members in every department. He said schedules vary and are very flexible, so anyone who might be looking for anything from full-time to just a few hours a week is encouraged to apply.

Fresh Seasons Market also has a new Facebook page which will include lots of good information and updates on the store. Everyone is encouraged to check them out and like the page.