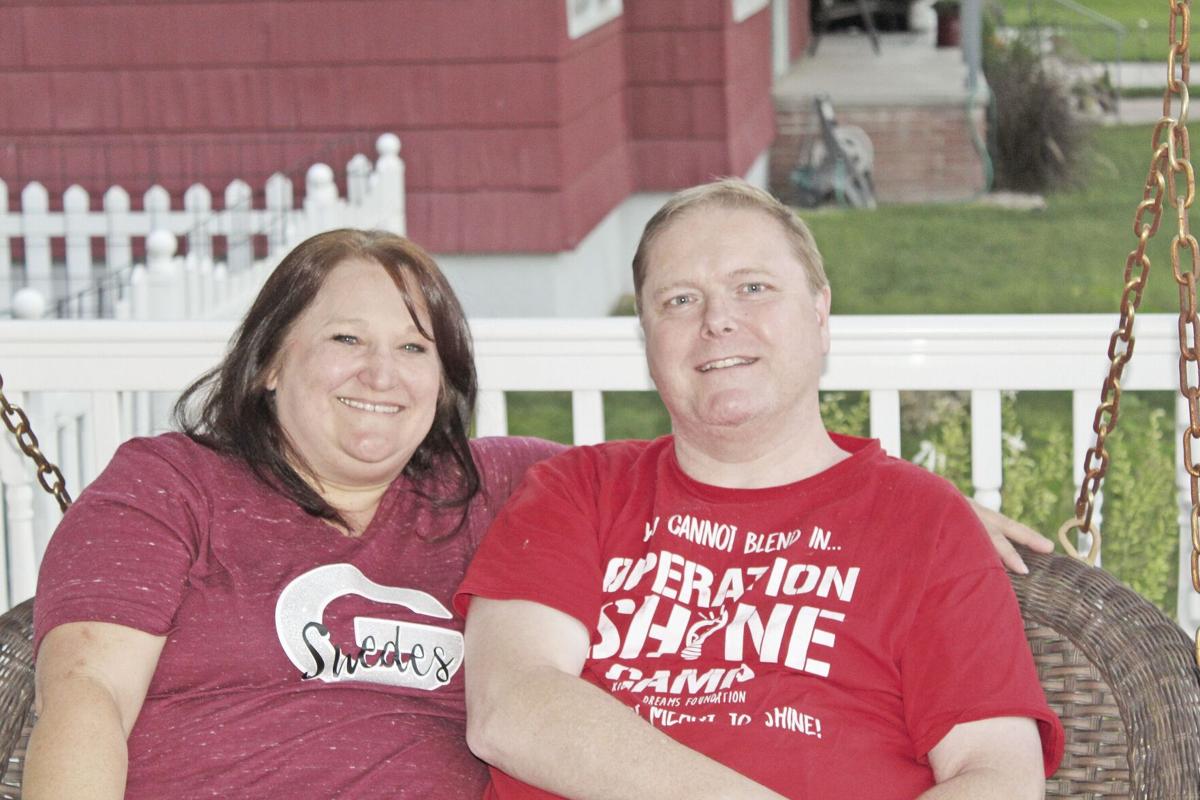 Jenny and Alan Daup say they now find so much joy in the little things in life, like time together swinging on their porch swing waving at neighbors. 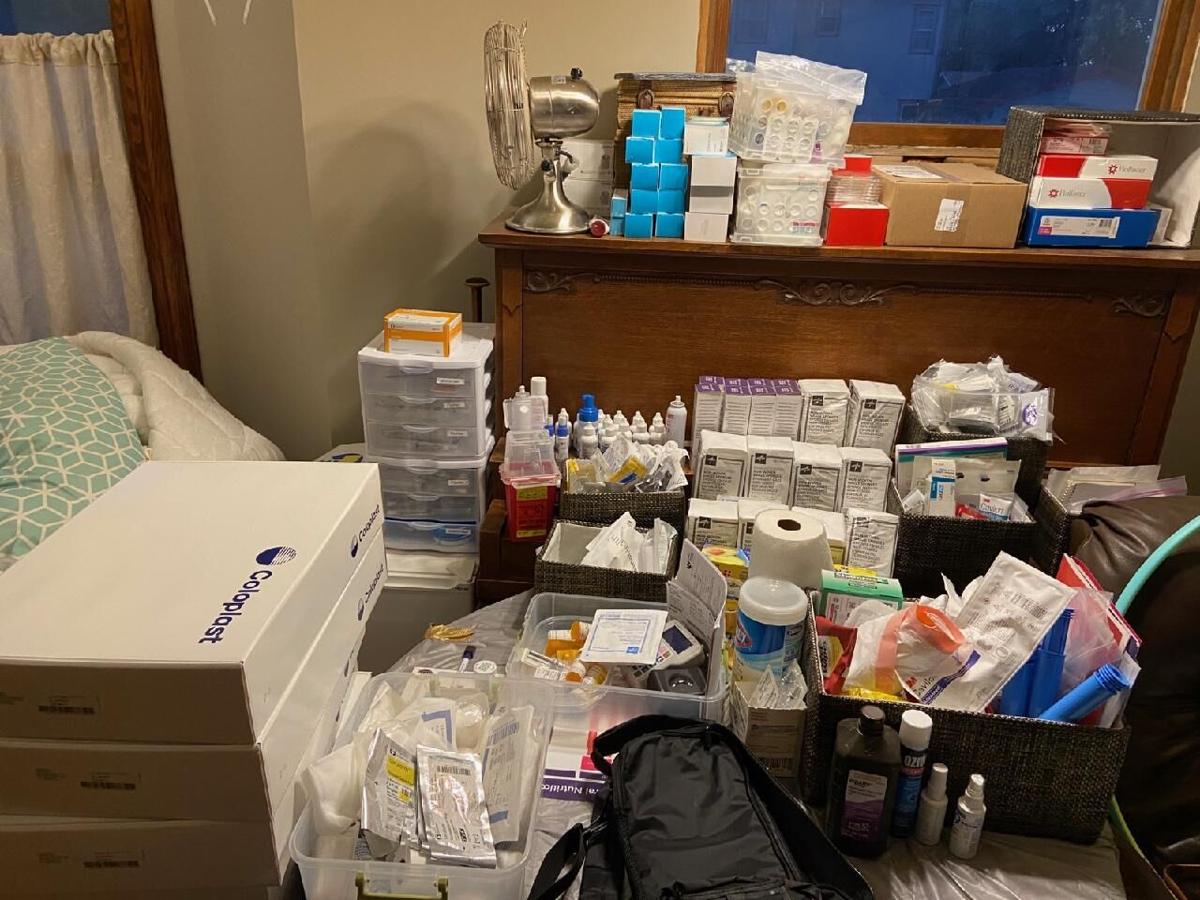 The pile of supplies needed to tend to Alan prior to his recent surgeries at UNMC. 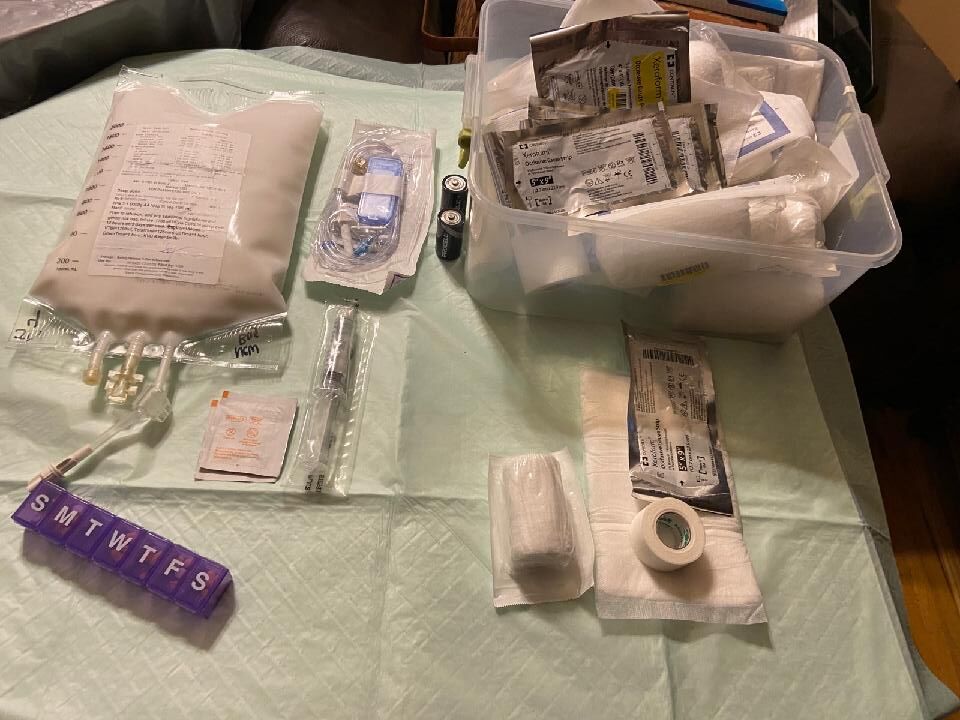 These are the supplies needed now to care for Alan. Thanks to his recent surgeries at UNMC, the pile has drastically decreased.

Jenny and Alan Daup say they now find so much joy in the little things in life, like time together swinging on their porch swing waving at neighbors.

The pile of supplies needed to tend to Alan prior to his recent surgeries at UNMC.

These are the supplies needed now to care for Alan. Thanks to his recent surgeries at UNMC, the pile has drastically decreased.

November 26, 2020, was a day of celebration in the Daup family, and many folks in the tight-knit community of Gothenburg joined in. After 323 days of hospitalization, many of those quite literally fighting for his life, Alan Daup came home. And while it was a joyous occasion, Alan’s ordeal was far from over.

Because of Covid and his weakened system, Alan was unable to welcome friends and neighbors to stop by. So the community showed their support by filling the Daup’s lawn with signs of love and encouragement; people drove by their home and honked as a way of saying hello...welcome home. About a month later, Alan was in another battle.

Alan came home still requiring a great deal of care. He had a fistula that was being treated, hoping it would heal on it’s own. Things took a bit of a turn right around Christmas time, said Alan’s wife Jenny, recalling the events of that evening. “He turned really pale, he wasn’t feeling very good and his eyes were kind of sunken in. So we took him up to the hospital here and Dr. Chew did a fabulous job. She called down to Bergen Mercy and told them she thought he had an infection in his picc line, so she started him on some medicine,” Jenny shared. “Between the time we got there and the time the helicopter got there he had gone into septic shock, but she had already put him on the medicine so he was starting to turn a corner but we wanted to get him to Bergen where they were familiar with his case.”

Once he arrived in Omaha it was confirmed that his picc line was infected, so it was replaced and Alan began yet another road to recovery. Unfortunately, it was all too familiar territory. His journey began on Jan. 5, 2020, when he was awakened by severe stomach cramps and a high fever and thought he simply had a stomach bug.

When his symptoms had only gotten worse two days later, Jenny took him to the emergency room in Omaha, where they were visiting their daughter. Fifteen minutes after a CT scan was performed, Alan was being prepared for surgery. There was a hole in an artery, and as the body tried to heal itself it formed a clot in the artery which had completely cut off the blood supply to his small intestine. Thus began his 323-day hospital battle.

Now, back at Bergen, the Daup’s were again face-to-face with the same surgeon where it all began. “When I asked her where we go from here, she said nothing more could be done. She said there was no other surgery that could be done, and no other surgeon would touch him because the clot still remained in his superior mesenteric artery. I asked her if there was anyone else, anywhere else, and she said no,” Jenny recalled. “She said when he gets to the point where he no longer wants to deal with all the bags and all the stuff to just let them know and they would put him in hospice. It was the first time I had heard that - I was just shocked.”

Immediately Jenny began doing her own research. She reached out to a college friend who is now a gastroenterologist in Iowa who suggested UNMC, which boasts one of the top three intestinal transplant teams in the U.S. “At that time I was just thinking wound care, so I called down there and talked to the wound team and they set me up to talk to Dr. Mercer. The doctor’s nurse called and said, ‘Ok, I’m assuming you want us to do surgery to close these fistulas.’ We just about fell on the floor from shock. She said that is what Dr. Mercer is known for, and told us to look him up. So we did, and found that people fly in from all over the world to see him.”

After meeting with Dr. Mercer, Alan and Jenny’s minds were put at ease when he told them, “I’m not scared of this.” He explained that while most general surgeons might see this type of thing once, this is what he does five days a week.

“We knew there were two fistulas that he needed to repair, and prior to the surgery he explained that he was going to open him up and take all of his intestines out and go through them centimeter by centimeter to make sure there is nothing we’ve missed,” said Jenny. “And sure enough there was a blockage and more fistulas - four all together. He said it was just like a tangled mess of fistulas in there.”

In that first surgery Dr. Mercer repaired two of the fistulas, but another fistula was discovered a couple of days after surgery. Because the intestines had been so tangled, another fistula also developed - meaning Alan underwent three surgeries within the span of a week at UNMC. After the third surgery it was evident there was still another fistula, but the doctors explained that they couldn’t do yet another surgery that soon. His intestines were just too delicate at that point, and scheduled the next surgery for three months later.

In preparation for Alan to return home, nurses trained Jenny in caring for and managing his wound. She explained that Alan has a gaping area where the surgery was performed which measures 7-inches wide by 11-inches long, and the supplies to care for the wound were very expensive and hard to come by.

Because so many of the supplies they needed were back ordered, Jenny had to get creative. A friend suggested using Glad Press & Seal in place of the wound managers that Jenny had run out of, and to their surprise it worked perfectly. That trick got them through until their items arrived.

About two weeks before the second trip to UNMC for surgery Covid numbers began to climb again, and hospitals were no longer doing elective surgeries - which is what Alan’s was considered. However, he had developed a herniation so the trip proceeded as planned. On Friday, Sept. 10 he was taken back into the operating room.

They had been told the same thing as the first time - two weeks in the hospital, and another two to four weeks close by after discharge. Alan’s sister had made arrangements to go to Omaha to stay with him during the times Jenny had to work and couldn’t be there.

“But that next week things were going great. Every day things were just going better and better; he had no leaks and no problems. The day after surgery they let him drink and the next day told him he could eat whatever he wanted,” Jenny said. “He ate only soft foods for the first few days, but everything was looking so good he started getting more adventurous. By Wednesday Dr. Mercer said he thought we would be able to go home by the end of the week. And sure enough, on Friday the 17th we got to go home.”

That weekend a special breakfast was planned for parents and students at their son Seth’s college, and Jenny had previously reserved a room on Friday night. So when Alan was released from the hospital they headed to Lincoln. “That night we slept in a motel, and ordered off the menu which we hadn’t done in a really long time. I used to have to fill two of the luggage trolleys with supplies for him and I would be sweating by the time I was done carting all the stuff to the room, so hotels were not fun. We only did that for surgeries. This time all I needed was my gauze and my tape!,” Jenny said excitedly.

She said every day since the last surgery has just gotten better and better. Alan is now on only a small amount of total parenteral nutrition (TPN), which provides the nutrients and fluids he needs. For months following his initial surgery, Jenny said, it was TPN that kept him alive. Having the fistulas repaired was the last major piece of Alan’s nearly two-year health battle.

“Dr. Mercer said by January he could probably go back to work,” said Jenny with a big smile.

Alan relaxes on his front porch swing and reflects on how lucky he is to have come through what he has. He is particularly grateful to have found Dr. Mercer, and for all of the support he has received from his family, friends and the community of Gothenburg. “People ask how I survived 323 days in the hospital staring at the same four walls,” Alan said. “I could have given up, or been mad at the world. But with all the cards coming in and prayers people were offering up, it would have been selfish of me to give up when others weren’t giving up on me.”

“You just don’t realize how much someone means to you until you struggle so much and make it out on the other side,” Jenny added as she laid her head on her husband’s shoulder. It’s the end of another day, and another victory for this couple...always remaining side-by-side.