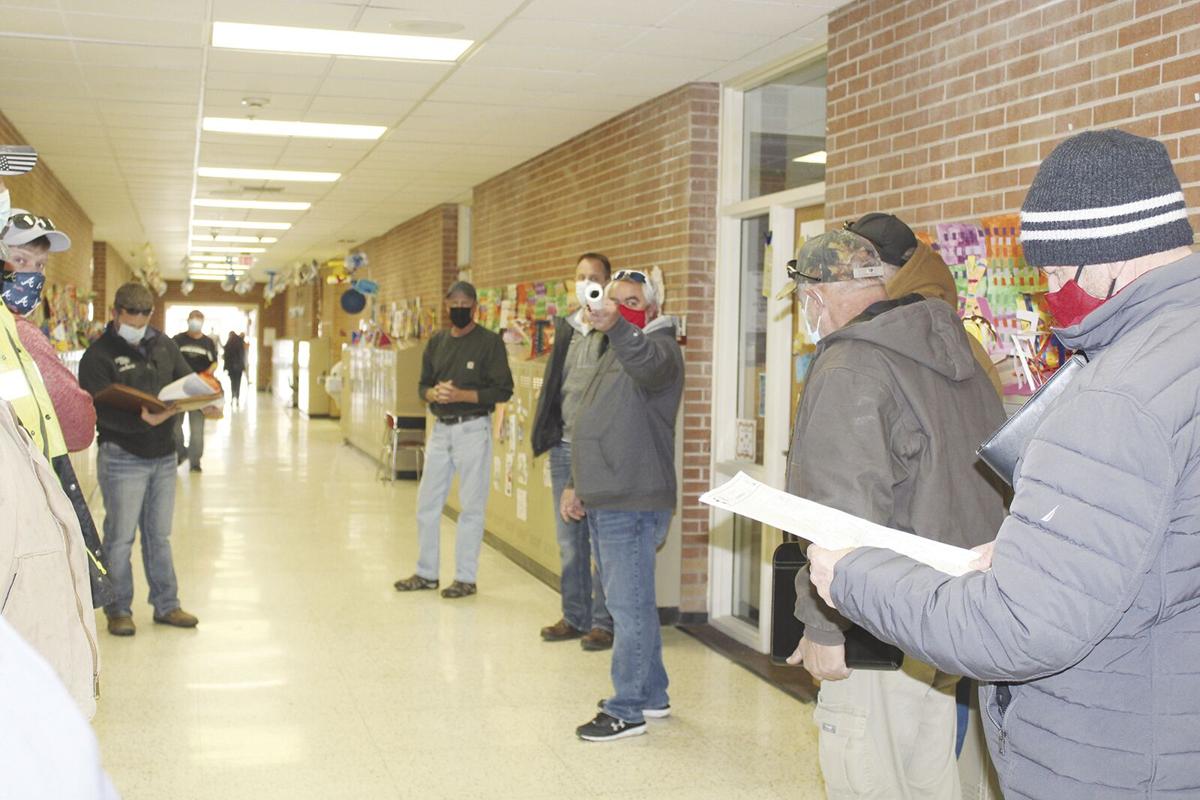 Architect Ryan Stearns guides contractors on a tour through the portion of Dudley Elementary slated for renovation this year. 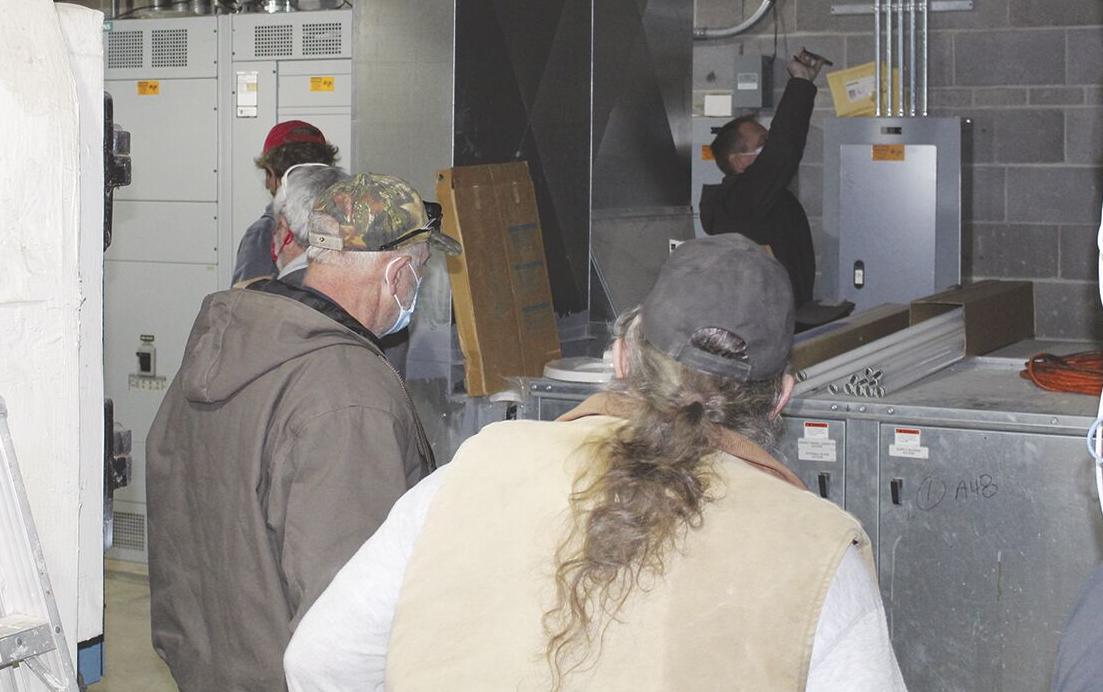 Contractors inspect the boiler room at the elementary school. This area will also be renovated in the project. 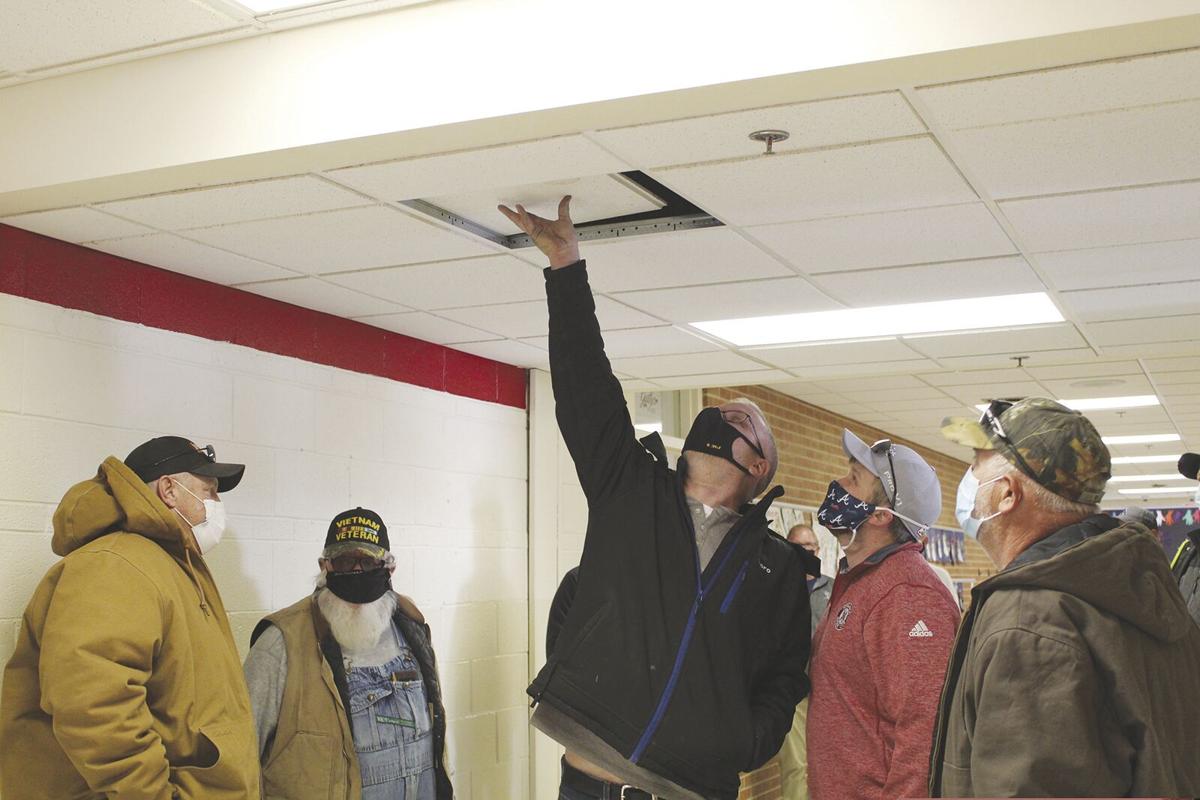 A contractor removes a ceiling tile to get a closer look during a walk-thru of Dudley Elementary. 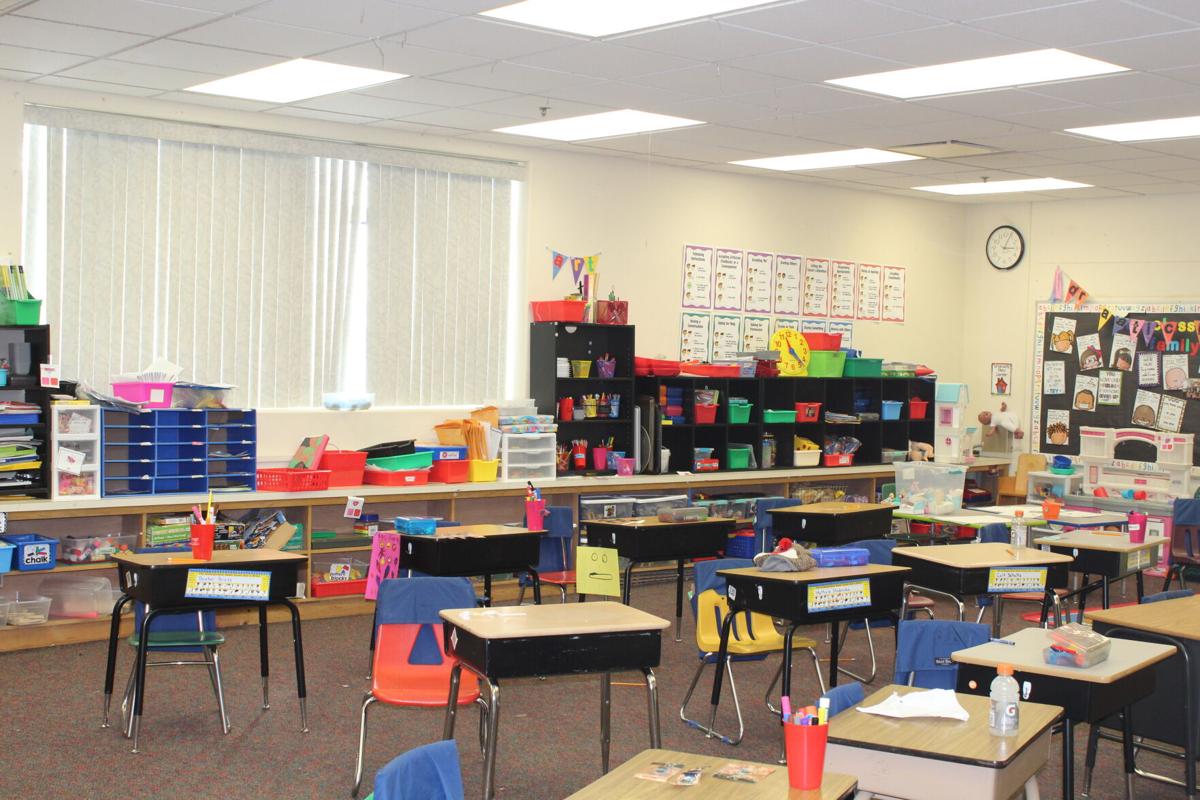 Architect Ryan Stearns guides contractors on a tour through the portion of Dudley Elementary slated for renovation this year.

Contractors inspect the boiler room at the elementary school. This area will also be renovated in the project.

A contractor removes a ceiling tile to get a closer look during a walk-thru of Dudley Elementary.

Gothenburg Public Schools prides itself on being a focal point of the community, and a drawing card for enticing families to relocate here. That doesn’t just happen. Maintaining a campus that houses an elementary, junior high and senior high buildings takes a great deal of effort and planning.

Last fall the school administration and the school board’s Facilities and Transportation Committee conducted a series of walk-thrus in the school and began making plans to address an area in Dudley Elementary that they said has needed updating for quite some time. Ryan Stearns with Joseph R. Hewgley Associates architecture firm in North Platte was brought in to evaluate the building as well, and a proposal for renovating that elementary area was brought before the school board at the Jan. 11 meeting.

“When I walked into the kindergarten room, it was the same casework as when I was in kindergarten. It needs some help,” said facilities committee chair Jon Hudson. “It’s the only part of the school that really hasn’t had anything done to it.”

“Basically you’re taking a 1954 classroom and making it a 2021 classroom,” Superintendent Dr. Todd Rhodes added. “We feel like this is really a good plan. To have a nice, secure front door access set up is going to be really nice. We have terrific facilities - this is the one area that needs to be modernized. We have the capacity and potential to create great learning environments for those pre-K, kindergarten and first grade students.”

The specific areas of Dudley school scheduled for renovation are the preschool room, four kindergarten rooms, three first grade rooms, one early childhood special education room, restrooms, boiler room, nurses office and the main entrance to Dudley coming in from the west. All of that area dates back to 1954. There were few electrical outlets put in buildings at that time, and the insulation was not as efficient as what we have today.

“Not only will the building get a remake but we will have furred out walls with insulation, brand new sheetrock walls, new ceiling tiles, new LED lighting that’s dimmable, audio systems for the classrooms, and some HVAC work as well,” Dr. Rhodes explained. “We’re going to create a much more conducive area for educating kids.”

Dr. Rhodes explained that the main entrance will be receiving a security upgrade as well, which will include two doors that must be gone through to get to the main office. From the front reception area there will be another buzzer that will open the door to allow the person access to the hallway where the classrooms are located.

“Where Mrs. Richeson’s (elementary principal) office is right now is a makeshift office from a classroom,” Dr. Rhodes said. The early childhood special education classroom is located on the other side of her office, and you have to go through the principal’s office to get to that classroom. “That actually will become another kindergarten classroom, so all four of our kindergarten classrooms will be in a pod together.”

The principal’s office will be relocated right off of the reception area, and behind

that office will be the early childhood special education classroom. “We’re not tearing out a lot of walls, but there are a few interior walls that are going to come down, and a few new ones are going to be put up to facilitate that area,” said Dr. Rhodes. “There will be a major overhaul in the nurse’s office. We will be making the restroom much bigger so if we ever have a student that is in a lift we have enough room for that lift to be in there, and just a better workspace for the nurse’s office.”

The superintendent said one thing that was learned during the Covid experience is the need for different areas in the nurse’s office for kids to be in so they are not presenting an exposure to someone else. The new office will have several bays built into it, with one room being strictly an isolation room with its own venting. “The nurse’s office and reception are the areas people will probably see the biggest differences just in terms of coming into the building,” Dr. Rhodes said. “And the classrooms are going to be 21st century classrooms.”

A total of nine classrooms will get a complete renovation, as well as the restrooms. The lights throughout most of that area are still fluorescent so LED lighting will be installed.

On Friday, Feb. 12 four general contractors and a host of sub-contractors were given an opportunity to get a close up look at the area to assist them in creating a bid proposal for the project. Bids will be opened by Stearns in an open meeting at 2 p.m. on March 2, and discussion and review of the bids will be held by the school board at the March 8 meeting. At that time one of the bids will be recommended by the Facilities and Transportation Committee and it is expected that the bid will then be awarded.

The renovation project is being funded with tax dollars being set aside in the special building fund. “For many years we have put a few cents into our special building fund, so no general fund dollars will be used for this project. We’re in great shape with our special building fund, and will not exhaust that fund for this project,” said Rhodes. “This is exactly the kind of reason we have a special fund - so we don’t have to go to the taxpayers and ask them to vote on a bond or anything of that nature. We’ve always taxed a little bit to have funds in there. Our total tax asking has been the same for almost three years straight, and our spending has been at about a 1.5% increase which is well below the state average of about 3.4%. Our district has always been very fiscally conscious.”

Rhodes said if there is one area of the school’s footprint that needs attention, this is it. “Our junior/senior high is a beautiful building, and the remodel on the 1972 addition of Dudley is pretty nice too. That includes all of the second thru sixth grade classrooms, and those did get some attention when the high school was built just under 20 years ago.”

Demolition on part of the project is anticipated to begin April 1. That area will include bathrooms and the boiler room, which will be accessed from the northwest parking lot without disturbing the academic area. “What that would entail would be to wall off part of the hall where the restrooms and boiler room are. We don’t feel that would be a hindrance on academics and it would get them a head start,” said Dr. Rhodes. The old boilers in the boiler room are no longer in use.

Once school is dismissed for the summer on May 14, construction will get in full force. All of the contractors understand the strict timeline of having the project completed in time for class to resume next fall.