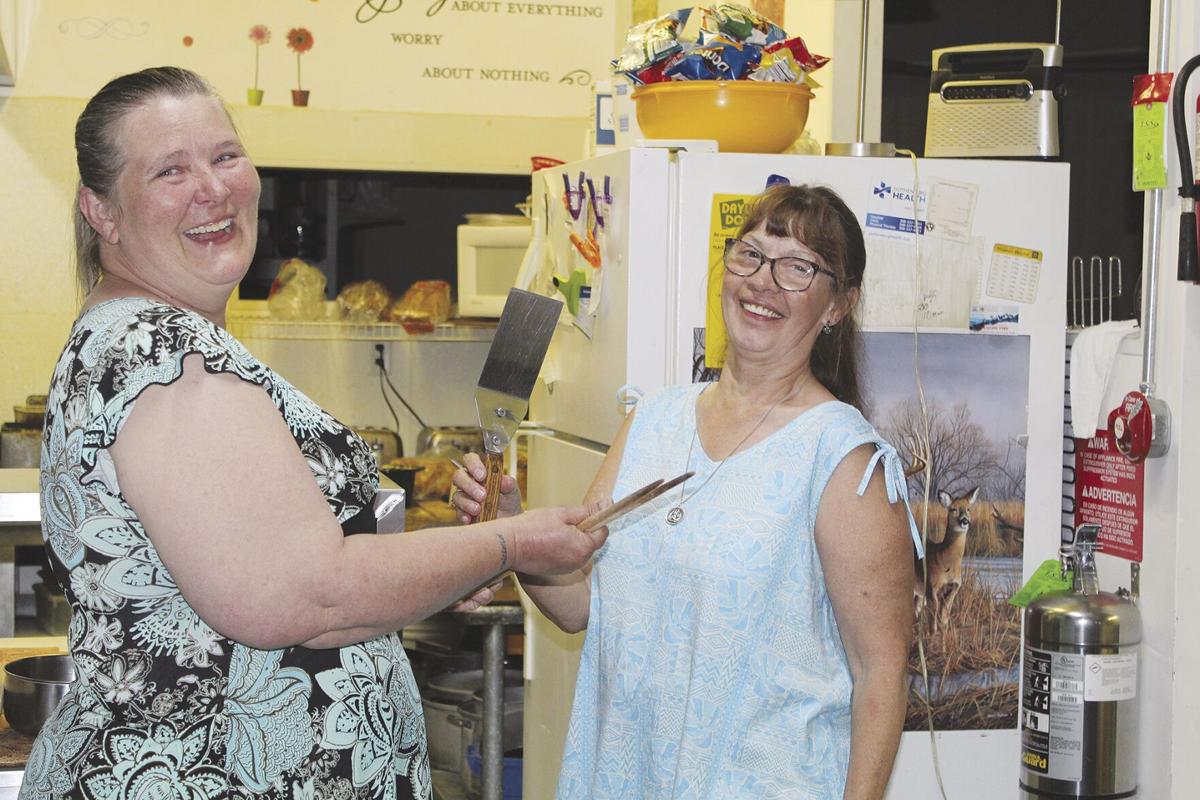 Deb Meredith, right, officially handed over her downtown diner to new owner Tish Hood on June 4. Nana’s Country Kitchen will open later this month - and will still include Daylight Donuts. 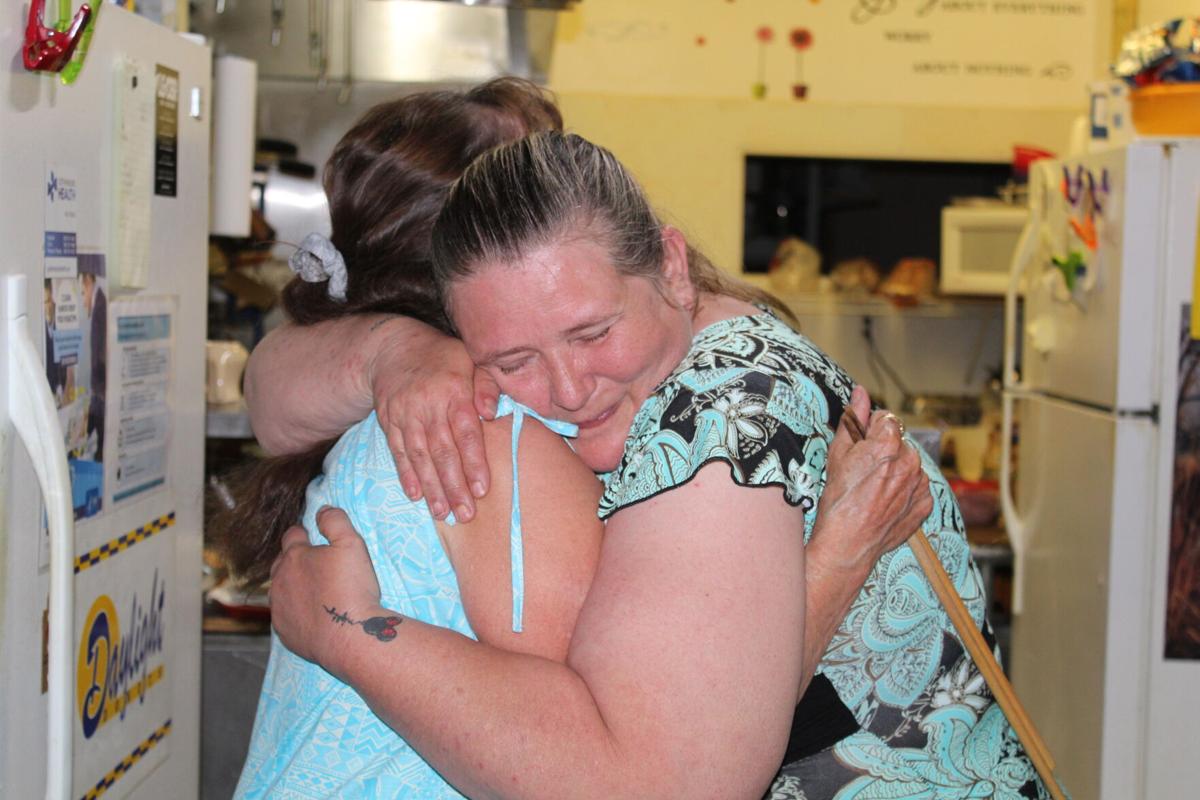 Deb Meredith, right, officially handed over her downtown diner to new owner Tish Hood on June 4. Nana’s Country Kitchen will open later this month - and will still include Daylight Donuts.

Every community has its trademark spots - those locations that all the locals know about and travelers hear about. The places that reflect the uniqueness and spirit of a town. In Gothenburg, one such place is Deb’s Diner.

In late 2008, Deb Meredith took a leap of faith and struck out on her own in business when she took ownership of the donut shop on Lake Avenue. Last Friday, June 4, Deb enjoyed her final day as owner of the donut shop and diner and officially turned over the reins to new owner Tish Hood.

Deb was born and raised in Cozad, and moved to North Platte after high school. That is where she met and married the love of her life, Dennis, and had their family. In 1979 the family moved to Gothenburg for Dennis’s job, “and we’ve been here ever since,” said Deb.

After working at Wheelers and helping open Dollar General, Deb went to work at the Randazzle Cafe where she stayed for seven years. “Then I was approached by a businessman here in town asking if I would consider taking over the donut shop because it was closing. The first thing I said was, ‘I have no money!’ He said that’s ok, I will help you out,” Deb fondly recalled. “So we went to Gothenburg State Bank and Matt and Mike Hildebrand said no problem - and they got me going.”

From day one the diner has been an act of community love and support for Deb. “When I first started out I was using styrofoam cups, paper plates and plastic silverware. I did very limited breakfasts because I only had two electric stoves and it was just me. The gal that came in to make rolls in the mornings would leave so I was doing the front and the back,” she explained.

At that time the shop was primarily known for its donuts and rolls. She said some of the customers began to comment that it would be nice to have breakfast, so she purchased a couple of countertop griddles and began offering breakfast items. “Then word of mouth got back to me that people didn’t really like the paper plates, so I said ok - I can’t afford to buy any. So word got out that I needed help and people started cleaning out their cupboards. They brought me plates, cups, silverware - and to this day I still have people asking if I need cups and I always say sure,” Deb shared.

That, she said, is why you see mismatched dishes, salt & pepper shakers, and even chairs when you walk in the door at Deb’s - they were all given to her. And that was not the only show of support from her patrons. “When I finally had to get a hood for my kitchen my customers helped out and came up with part of the money for it. One time one of the older guys came in, and I was doing quite a few breakfasts by then, and he said ‘don’t you have a big griddle back there?’ I said no, so he helped me buy my six-burner griddle.”

“I have customers that I have served breakfast to every morning for 12 years. Like the Lodge brothers - they are at my doorstep every morning at 5:30 waiting to get in,” she said with a huge smile. “You feed these guys so often you know what they are going to have when they come in. They are great guys.”

Deb said she makes the first two pots of coffee in the morning, but that’s it. “The customers make them from then on. Customers even serve the coffee to other customers. I had one lady message me to say they were going to be traveling through and asked if it would be ok if they stopped and served coffee to the customers. Of course I said sure!,” Deb said with a chuckle.

One tradition for visitors to Deb’s Diner has been leaving a note on the wall that includes where you’re from. “I have every continent on there except Antarctica, and every state,” said Deb. “I have one guy from Great Britain who comes over every year and always has breakfast at my place. I told him he has to let me know when he comes this year so I can come down and have breakfast with him.” She plans to make scrapbooks from the notes that have been left on the wall throughout the past 12 years.

Deb explained that the only requirement to being a Daylight Donut shop is to purchase their supplies. There is no franchise fee. For years Deb has gone into the diner each morning at 1:30 a.m. to make the donuts. When asked what she plans to do now she did not hesitate. “I’m going to stay up late, and sleep late. And I have several flower beds that I have not tended to,” she said. She also plans to spend time with her kids and grandkids and just enjoy life.

Tish plans to maintain the donut shop just the way it is. She said she also plans to leave the menu items that customers have learned to love. However, she does have a few changes in mind for the diner - beginning of course with the name. Nana’s Country Kitchen will serve the same great food, great donuts and rolls, and offer the same relaxed and inviting atmosphere that everyone has become accustomed to.

“My class prophecy that they wrote about me for Prom was that I would be the future owner of Lucille’s Kitchen in Brady,” said Tish, a native and graduate of Brady. “So owning a restaurant has always been on the back burner throughout my whole life. But with God’s timing, it is now all coming to fruition.”

Tish said she has had a lifelong passion for cooking, and that combined with her social personality is the perfect combination for a restaurant owner. She has extensive experience in the industry as well. “I have worked at nearly every restaurant in this area at some point,” she said. She spent six years living in Chicago and working as a nanny after high school, but also worked in an ice cream shop while there. She eventually landed at Brady school as food services director where she worked off and on for 10 years.

She came on board at Deb’s Diner two years ago, and has taken advantage of that time to learn the ropes from Deb. “I’ve gotten to know the clientele and what they want. But there’s not much you can change, because what Deb has works.”

However, Tish did share future plans she has which do include a few minor changes. She will be bringing back the salad bar, which went away last year due to Covid. Perhaps the biggest change will be the addition of Sunday hours. “I am going to be open on Sundays and do a Sunday breakfast, and then offer a buffet. But we will not do donuts and rolls on Sundays. I know a lot of people like to go out for lunch after church and this will open up another door for that. I know one of the big draws will be my pan-fried chicken,” Tish shared.

She also plans to add a few hot-and-ready items each morning, such as breakfast pizza, breakfast sandwiches and biscuits and gravy. “It will be a rush in and rush out kind of thing, just a different option than the rolls,” she said.

As far as changes to the business itself, Tish plans just a few minor cosmetic changes like painting and redecorating. The process of transitioning, including all of the tax and LLC components, has taken a little longer than expected, so the diner will be closed temporarily while all of those projects are completed. However, Tish said she will have the kitchen open no later than June 21. Hours for Nana’s Country Kitchen will be 5:30 a.m. till 2 p.m. Monday through Saturday, and she has not yet decided the opening time on Sundays. The kitchen will remain open until 2:00 on Sundays. Her daughter, Kaiti, will be helping her with the rolls and donuts.

“All my grandkids, nieces and nephews call me Nana - and I want that environment here,” said Tish. “I want people to walk in and feel like they just walked into grandma’s kitchen and feel at home. That Sunday visit-with-your-grandma kind of feeling. That’s what I want.”