You are the owner of this article.
Edit Article Add New Article
You have permission to edit this article.
Edit
Home
News
Sports
Brady Bulletin
Community Calendars
Galleries
Birth Announcements
Obituaries
Classifieds
e-Edition
Contact Us
Share This
1 of 5 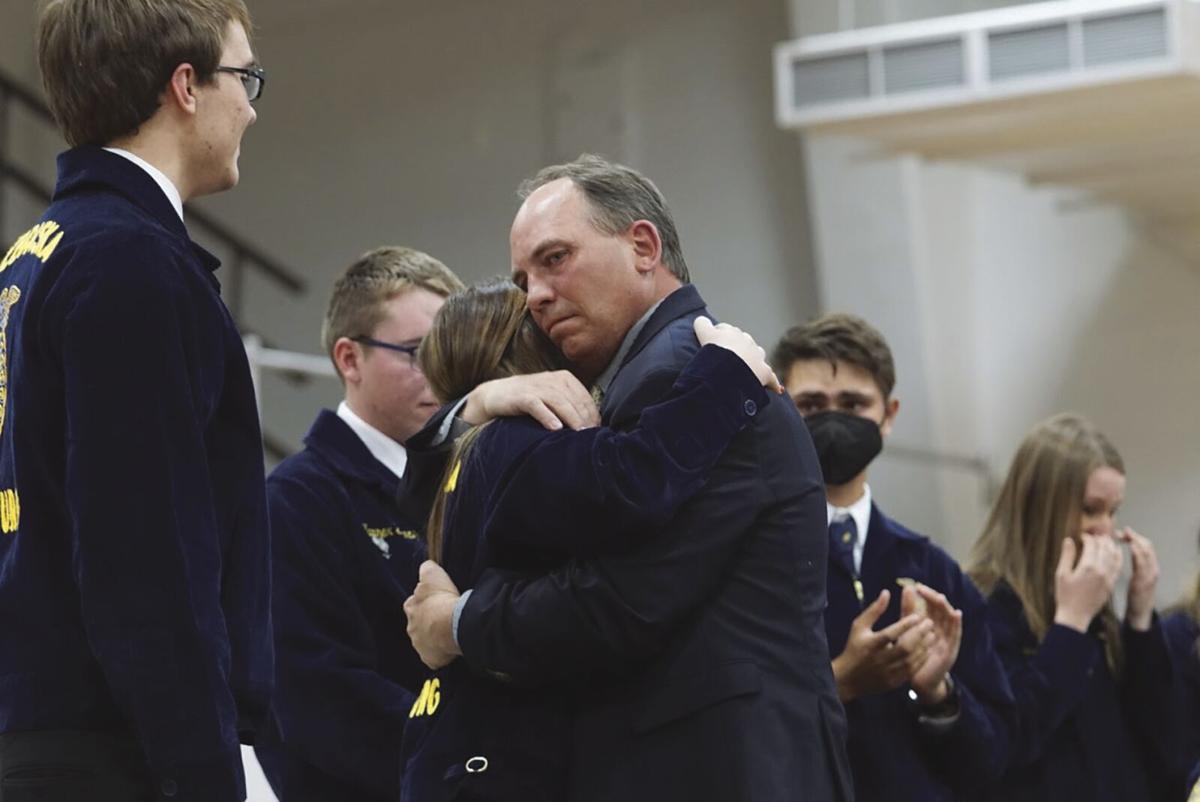 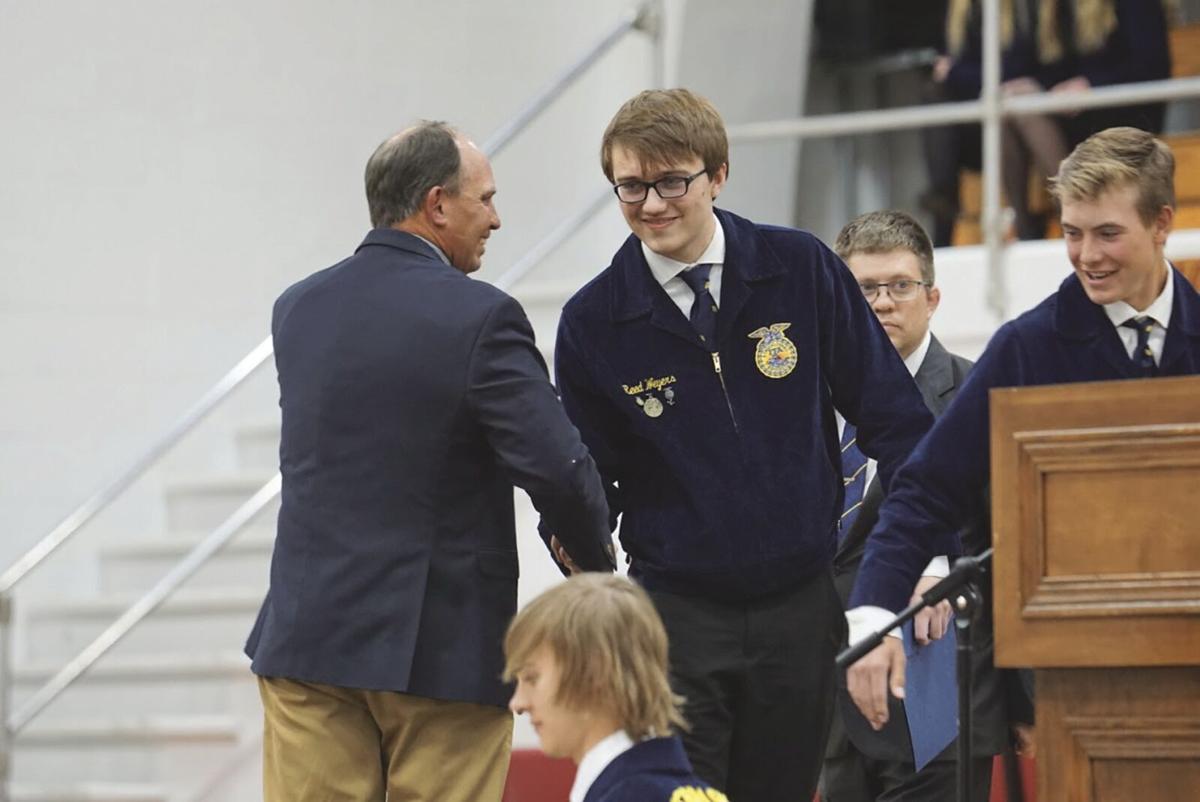 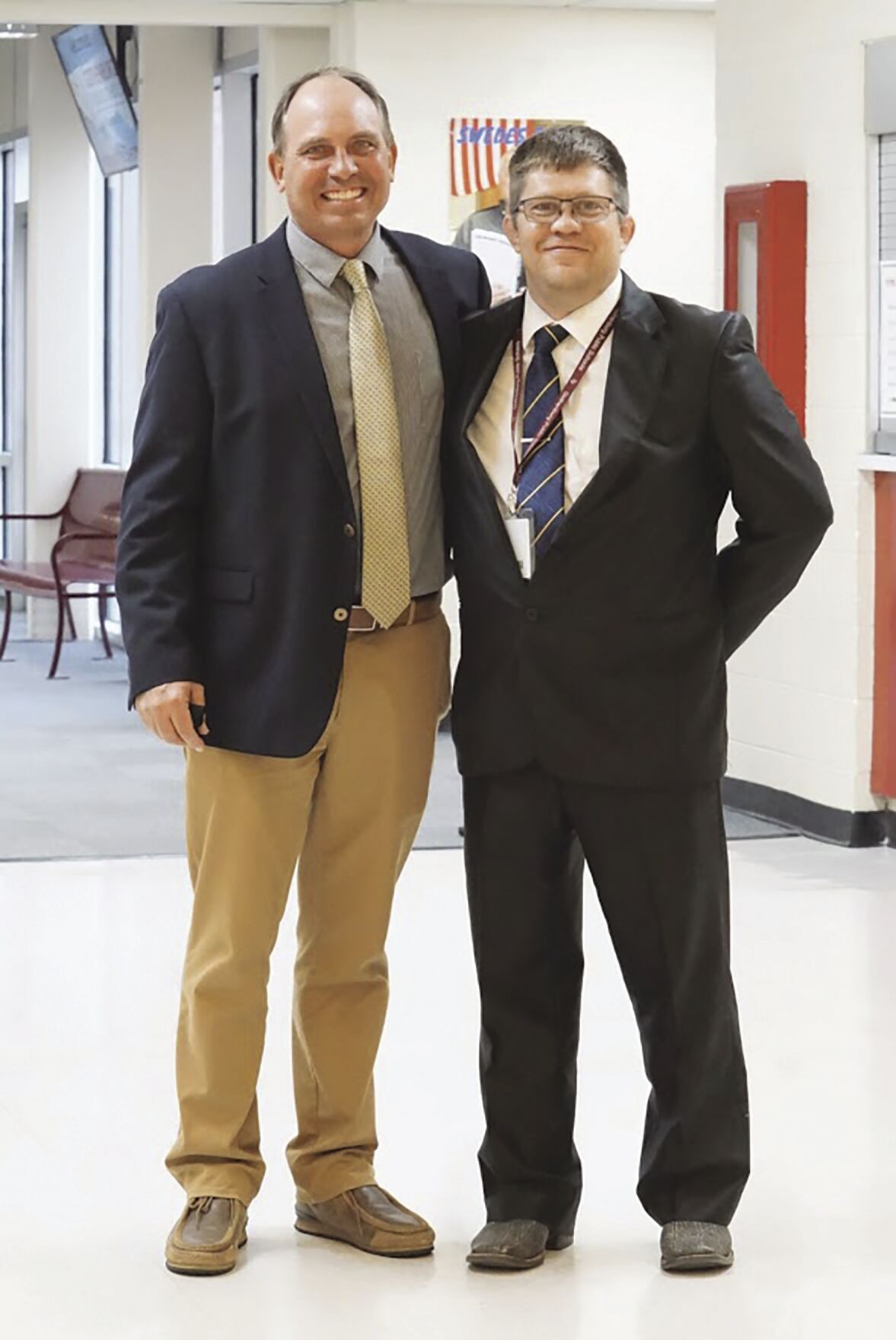 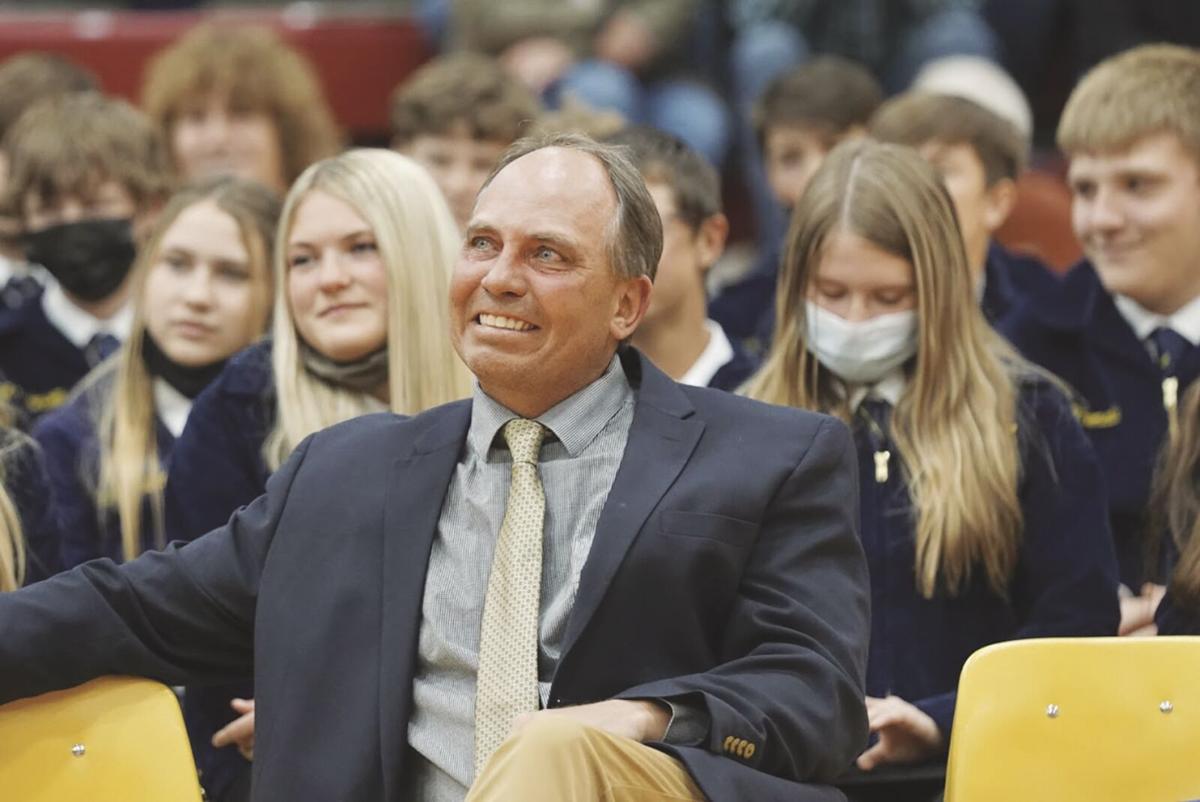 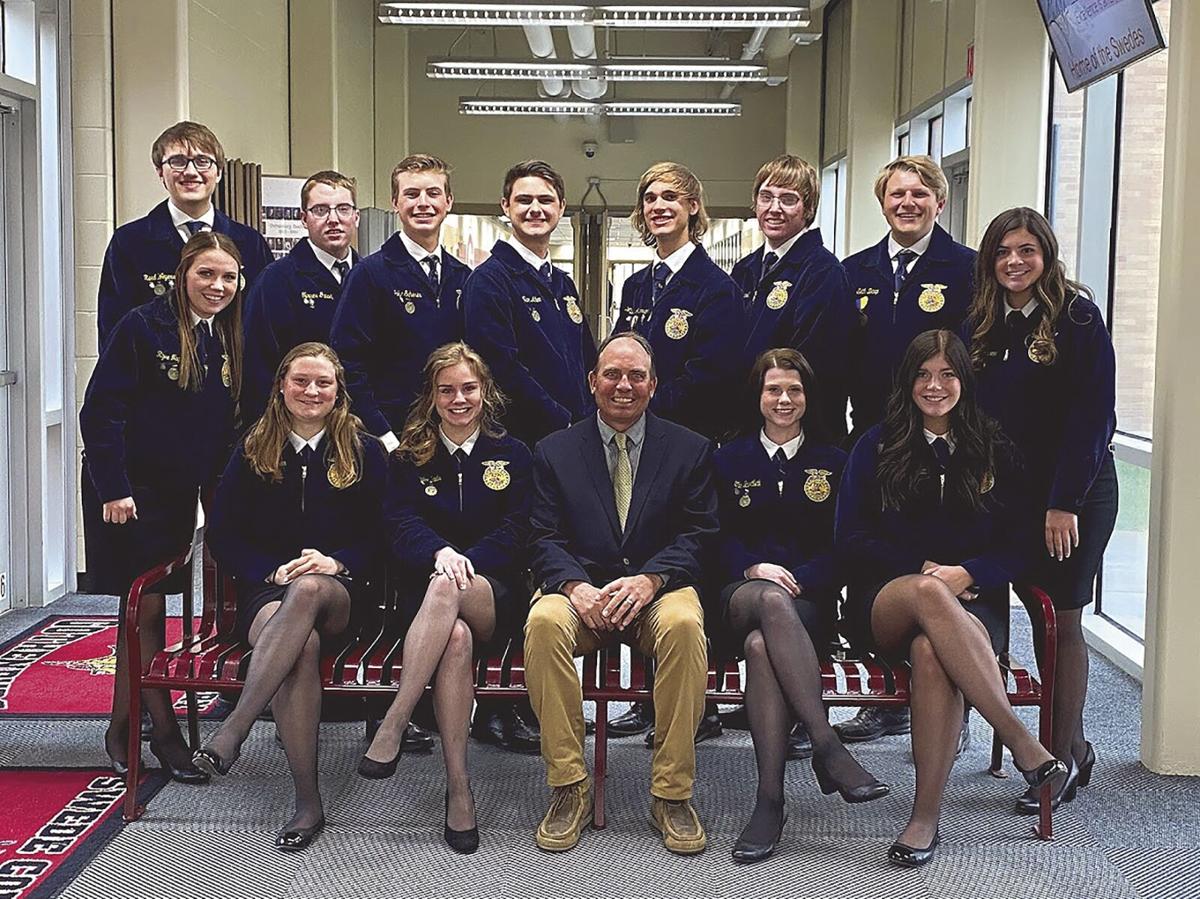 The Gothenburg FFA chapter held their annual banquet, awards night and labor auction on Monday, April 19. Lots of students came expecting to hear their name called in recognition of their achievements in FFA this year. Parents, farmers, ranchers and business owners came expecting to win the bid at the labor auction. What most didn’t expect was the announcement from long-time ag educator and FFA advisor Dan Scherer that this will be his final year.

Scherer celebrates his 30th year at Gothenburg Public Schools this year, and he said the time just seemed right to move on to the next chapter in his life. That chapter, no doubt, will include agriculture in some way. Every chapter has.

He grew up in Clarks on a farm and after high school attended the University of Nebraska-Lincoln where he graduated in 1989 with a general ag and ag business degree. Scherer started out his college career in athletic training, something he really liked. “I sat down with my advisor and he told me he thought I was better suited for coaching than training. So that’s when I changed and went into ag ed,” said Scherer. “I had agriculture in my blood, and if I was going to teach anything that was the way I would go.”

He graduated in December 1990, and a few months later received a job offer to run an air products store in Lincoln. “I really planned on running that welding store. But while I was waiting for everything to go through I kept getting phone calls from Bryan Brede, who was the vocational coordinator at Gothenburg Public School, and Wayne Bell who was the superintendent. I would get a phone call about every night asking me to come out and look at the school,” Scherer recalled. “After about seven or eight nights of this I got a call from air products that they had lost some of my paperwork so things were going to be a little delayed there. That same night Brian called again, so I came out just to meet Brian. That’s really the only reason I came out.”

The administration did end up offering a sweet enough deal to get his attention, and the rest - as they say - is history. “At that time the FFA was pretty small and there were no females involved in the ag ed program at all. So we had to kind of change the curriculum a little bit from the shop and welding classes to more of what we have now,” he said. “We couldn’t even field an officer team that first year.”

About two years ago Gothenburg became the largest chapter in the state of Nebraska with about 212 members. A few years ago a junior high FFA program was added and that program continues to grow. That kind of commitment and support is not only part of what brought Scherer to Gothenburg - it is what has kept him here.

“I love the people here. I’ve had other offers, but it would be really hard to move because of the support - this is a tough community to move from,” he said.

Dan met his wife, Sharise - also a teacher here - in the Gothenburg school system. They have been married 21 years and share a love of teaching, and of Gothenburg. She will continue teaching here for at least a few more years.

When asked what his favorite part of his job is, Scherer did not hesitate - “the kids.” That is evident by the fact that he announced his retirement at the FFA banquet first. “We’ve got great kids here. I waited to announce everything at the banquet because I really wanted to tell the kids and the community together.”

He said trying to decide when to make the transition to leave teaching has been tough. “I actually met the rule 85 this year, and my life goal was to get out of education early and maybe do something else. I’m not sure what that is right now,” he explained. “A lot of people think teaching is an 8-4 job, and in ag it’s not. My days start well before 7:00 and a lot of nights. It’s been a lot of hours in 30 years and I’m just kind of ready for a break, ready for a transition.”

The school’s FFA chapter is a legacy that Scherer has built, but he credits the kids for that. “I’ve been fortunate enough to have a lot of state officers and even a national officer, and highly successful kids. Again, that’s why it’s been so hard to leave - because our kids are so good. With the great kids you don’t have to do a lot with them. Oh, you may say a few things here and there to motivate them or drive them a little bit, but I’ve been fortunate just to have a lot of success.”

That success isn’t just individual. Scherer said the honors the chapter as a whole has received are what he is most proud of. Gothenburg has been recognized as a National Chapter for each of the last seven years. “We’re in the top two to three percent of all chapters in the country. Those things are hard to leave. I’ve had people ask me if I would go into another school and try to build up their chapter, and I just say I’m not gonna work that hard,” Scherer said with a laugh.

Scherer said he is not concerned about the legacy of the FFA chapter moving forward, adding that he feels Tim Negley will keep the ball rolling. Whoever takes over the reins of the FFA chapter will certainly have big shoes to fill. Good teachers can have a huge influence on their students, and Dan Scherer has had his share.

“When I say that Mr. Scherer is more than just an ag teacher or FFA advisor I know many will nod their heads in agreement. He was a coach, advisor, role model, and mentor for all that were able to be a part of his classes or teams,” said GHS alum and FFA State Officer Heath Keiser. “I came into FFA as a junior higher and he immediately got me hooked. He always pushed his students to put in the work to see the benefits and was always quick to a story anytime he got the chance. Mr. Scherer - Thank you for developing Gothenburg FFA and the community to what it is today. There is no way this community would be where it is today without your leadership and guidance.”

Keiser is far from alone in crediting Scherer with influencing his future plans. “Dan Scherer played an instrumental role in my decision to pursue a career in agriculture education,” said GHS graduate and former FFA officer Morgan Kowalewski. “He has always believed in his students, especially when we didn’t believe in ourselves and is one of our biggest cheerleaders. I am grateful for his belief and support in me throughout high school and beyond, and wish him the best in his retirement! Thank you, Mr. Scherer!”

Scherer did say he sees himself continuing to help out in some way with FFA, whether it is as a mentor or proctor or maybe even eventually helping coach a team again. “But we’ll see what happens,” he said.

Scherer said at this point he doesn’t have anything set in stone as far as future plans, but that he is looking forward to watching his son Jake play college golf next year and spending more time with family and friends.

He refers to himself as “a little competitive” as he looks around his classroom at walls lined with championship awards. “I was lucky enough to have a state champion my first year and we have had state winners almost every year since. I had once said that I wouldn’t retire until we had a year without a state champion, but I don’t want to be that old!,” Scherer said with his signature smile.

“I want to enjoy retirement and be young enough to be able to do something. I like to travel and see things, and now I will have more opportunity to do that.”