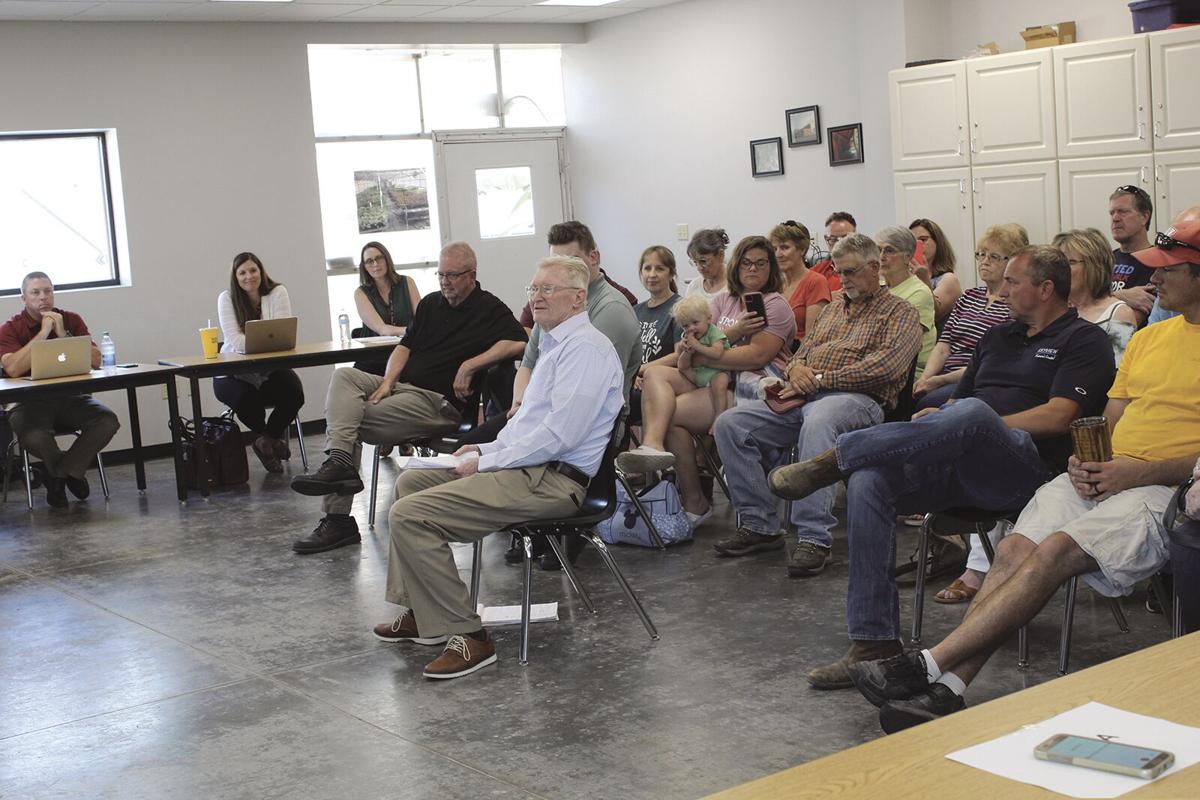 Nebraska State Board of Education representative Robin Stevens addressed the Gothenburg school board Monday in front of a packed house. 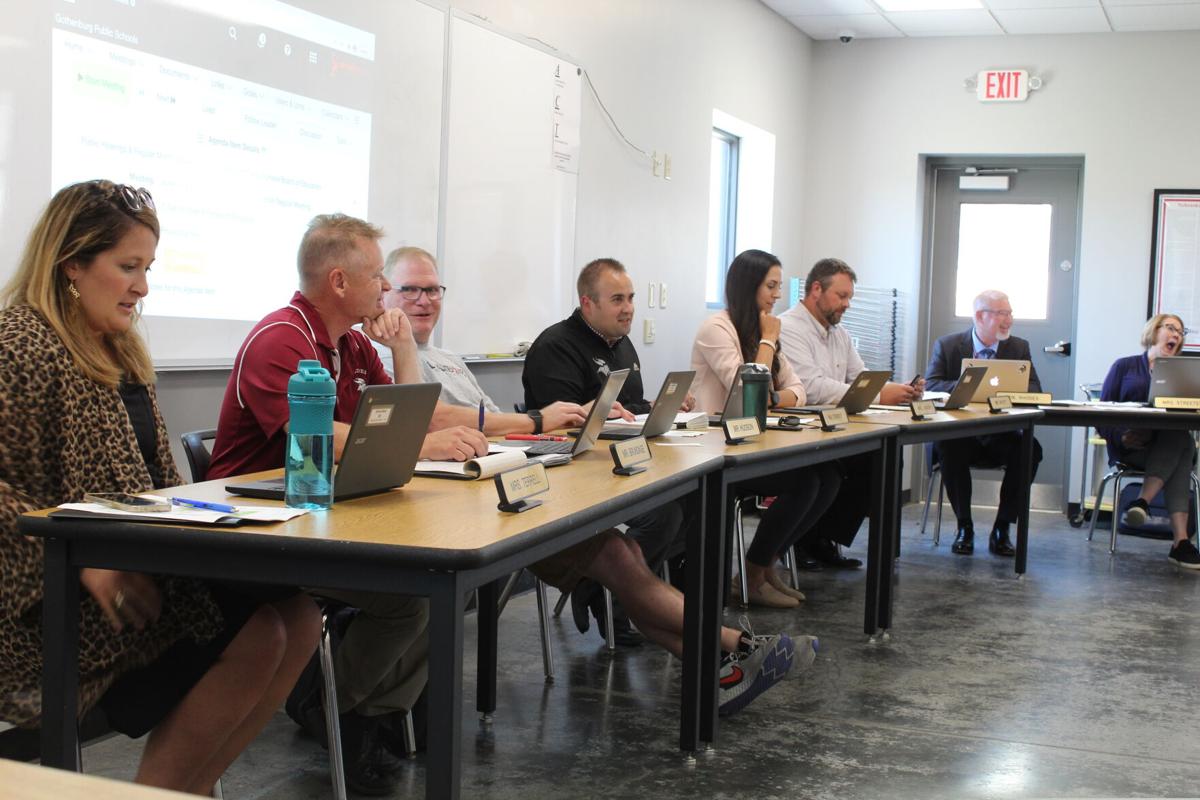 School board members prepare for the meeting on June 14 in the Discovery Center at Gothenburg Public Schools. It was a full room again as discussion centered around State Health Standards.

Nebraska State Board of Education representative Robin Stevens addressed the Gothenburg school board Monday in front of a packed house.

School board members prepare for the meeting on June 14 in the Discovery Center at Gothenburg Public Schools. It was a full room again as discussion centered around State Health Standards.

In what has become a common sight in recent months, it was standing room only at the June 14th Gothenburg Board of Education meeting, with the hot button topic of state health standards being the primary reason for the large crowd. Nebraska State Board of Education member Robin Stevens was on the board’s agenda to give a presentation at the meeting, and all eyes and ears were on him when he spoke.

He began by thanking all of the parents and members of the public for taking an interest in their children’s educations, before moving into his responses to questions that he had received from the school board. He explained that the state has developed standards for core subjects in public schools as a means of accountability. With these core standards schools have the option of implementing what the state sets or implement their own which must meet the guidelines of being equally or more rigorous than the state standards. That same rule does not apply, said Stevens, to the non-core standards such as health.

“You are not required. It’s called local control. You can take these standards and accept them the way they are - and by the way, we have nothing out there right now. The old draft has been sent back for rewrite. We didn’t like them either, so we sent it back,” he said. “But no matter what we do, eventually you guys (pointing to the board) are going to have to decide whether you are going to adopt the standards or not. It will be up to you as a board to give directions to your administration. The only thing the state requires is that you have some type of health education standards.”

Stevens, a retired educator himself, said that all conversations he has had with teachers across the state indicate that teachers do use state standards as a guideline for what to teach in the classroom. That, he said, is why having standards is important.

As far as the health standards being proposed in Nebraska, as of now there is not a draft in place. The survey relating to the first draft of the health standards is no longer on the state’s website, which Stevens said is because there are no standards as of now. He did say that 9,490 people responded to the survey. “You know how many we usually get? Very few, if any. So maybe the controversy isn’t all bad. It’s good to see people out there connecting,” Stevens added.

He said at one time it was thought results from the survey might be available in June. However, he now believes those results will not be sent back to the writers of the standards until July which means we are probably not going to see the second draft until after that time - likely August or September.

“The first batch of survey responses, which are those taken up until March 29, have been looked at - and there are some common themes. I do want to emphasize that this is preliminary. Those themes are: developmentally and age appropriate; emphasis on family and parents; concerns about gender identity; they should be removed; concerns about sexual orientation. Those are the top five,” said Stevens.

He said these concerns, as well as several others from the survey, will be included in the final report that will be presented to the writers as they begin reworking the draft. “Draft 2 is going to be coming out. And there is no doubt in my mind that you are going to see that the State Board of Education and the Department of Education are listening,” Stevens said. “I think you are going to see some major changes. Now I’m not privy to that information, but I believe the instructions that we gave to the department in April were that these are not acceptable so take them back.”

He did tell the public and the school board and administration that likely the second draft will not be exactly what everyone wants. “There are conflicting views on this. But we believe in Nebraska values and I believe that you are going to see a major change based on input,” he said.

Stevens also had a confession on behalf of himself and the rest of the state board. “We goofed up big time, because the draft got out ahead of us. I could blame that on a lot of people but I’m not going to. I had enough time, I could have stayed up and read it all, but I didn’t. And it got out, and we are paying for it. And we should,” he admitted. “I can say this - that with draft number two that’s not going to happen again.”

He said once the second draft is released the public input process will be the same as in the first draft. Stevens spoke for nearly 45 minutes and during the public comments portion of the school board agenda no audience members opted to share. Several of those in attendance did stay in the room for the remainder of the meeting.

Action items on the agenda included the second reading of a policy change to bring the current graduation requirements up to date. The second reading and policy were approved. Superintendent Dr. Todd Rhodes presented the five year strategic plan for the district and suggested the board take time to review the plan before making a decision on approval which will be set for the next meeting. Meanwhile, the jr., high/sr. high and elementary handbooks were approved for the 2021-22 school year.

In other action items the board heard from Activities Director/Assistant Principal Marc Mroczek on a request to add both a girls’ tennis program and a girls’ wrestling program to the activities schedule for the 2021-22 school year. Mroczek said that in a survey of junior high and senior high girls 78% of those responding said they would be interested in participating in a tennis program. He said the cost to the district would be minimal, and the board unanimously approved the addition of both the girls tennis and girls’ wrestling programs.

Finally, Dr. Rhodes gave an overview of the legislative bills that were passed this session which impact school districts and also provided an update on the Dudley renovation project. Rhodes said that as of now the contractors are on schedule to meet the Aug. 1 deadline.

The next meeting of the Gothenburg school board will be Monday, July 12 at 5 p.m. Meetings are held in the Discovery Center and are always open to the public.