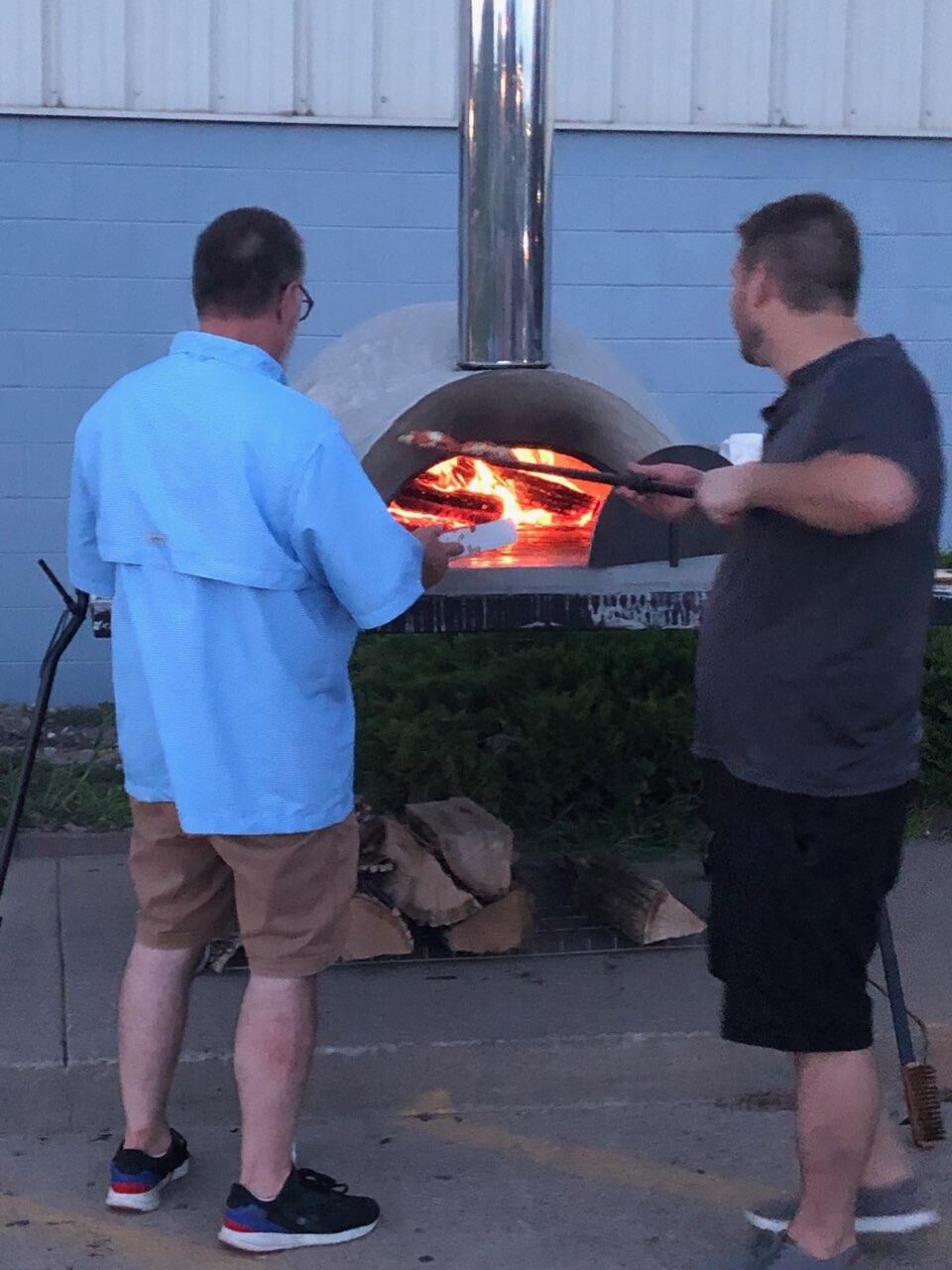 Mark Watje, right, and his dad Kevin prepare to take a pizza out of the fiery oven. 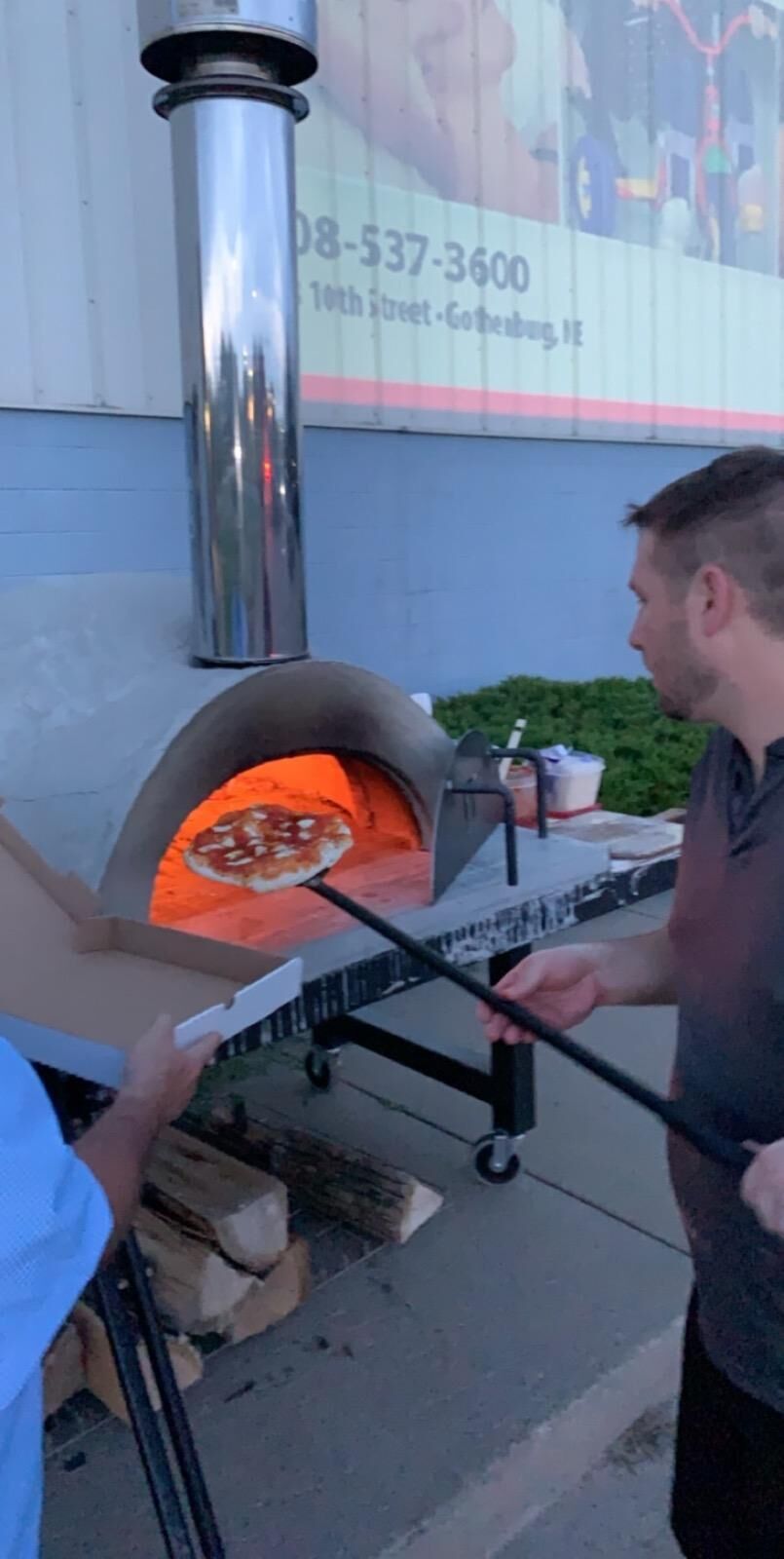 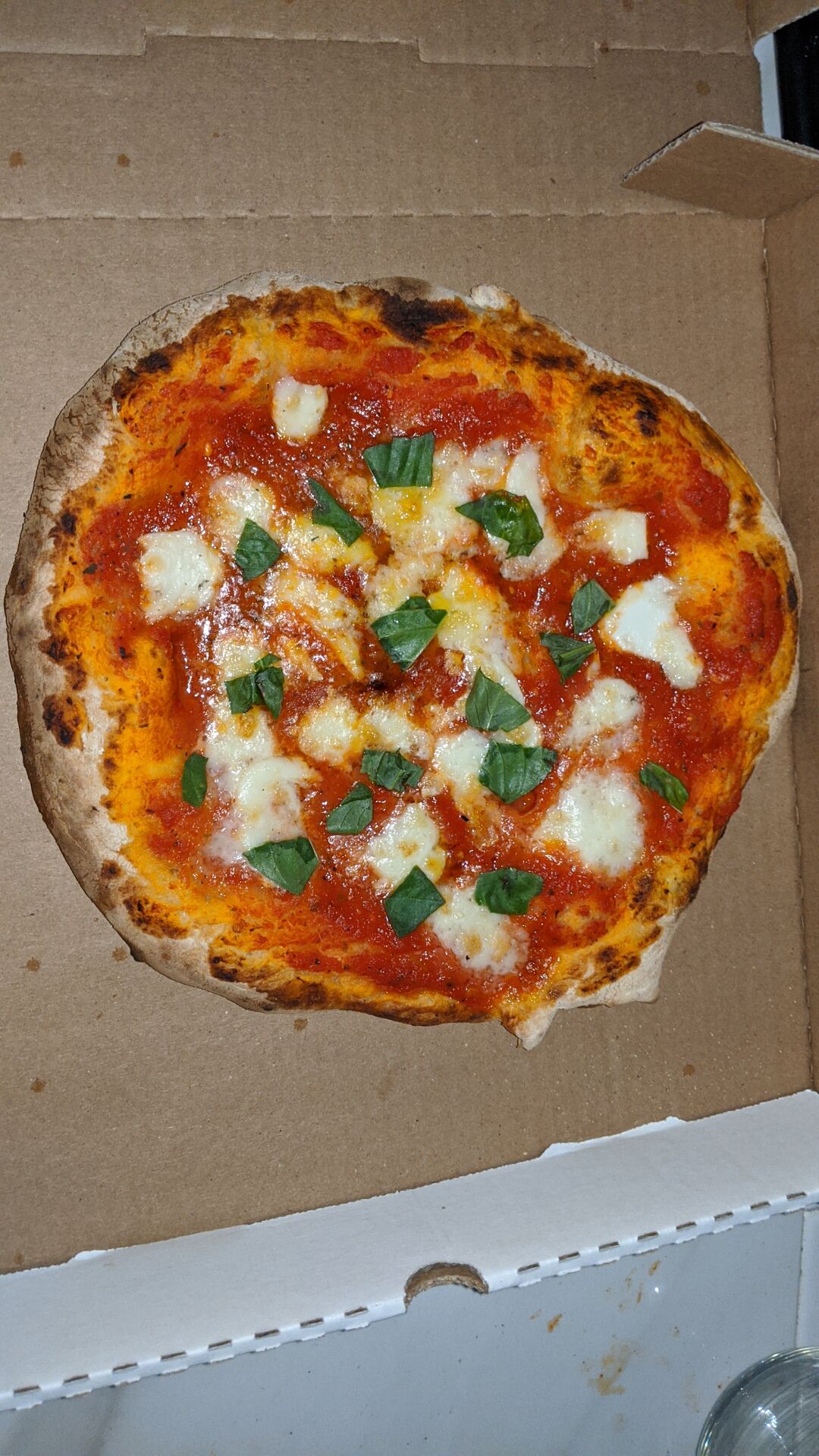 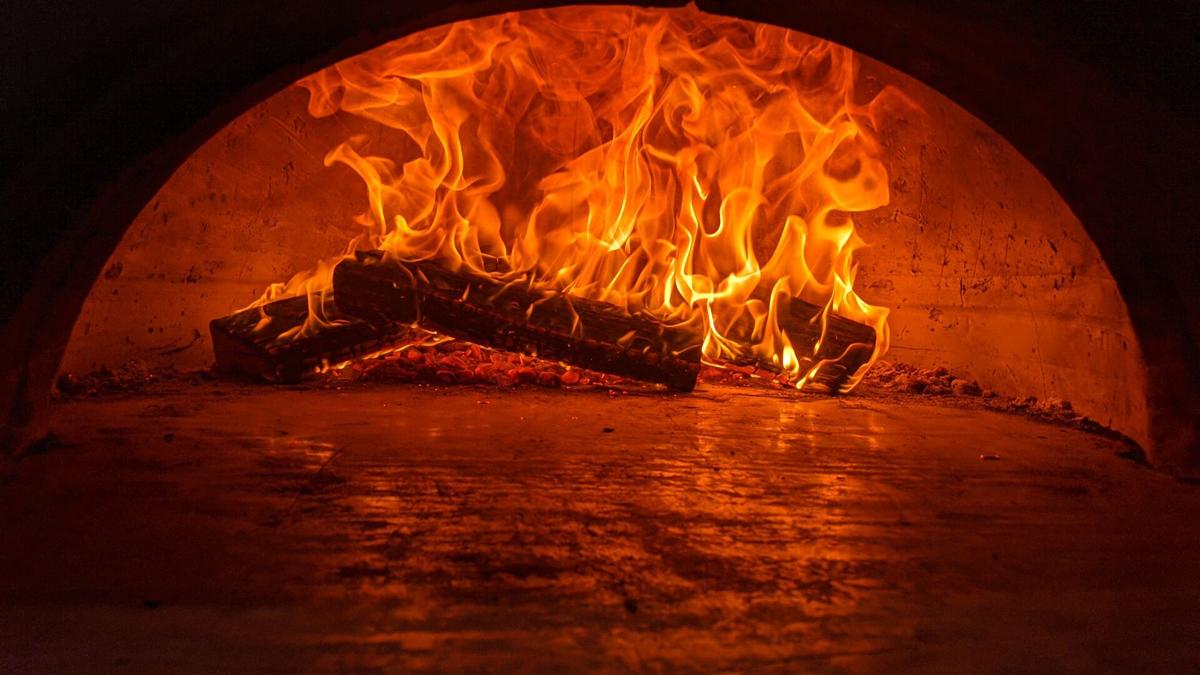 The fire in the brick oven reaches a temperature of 700 to 900 degrees - perfect for classic Italian pizza.

Mark Watje, right, and his dad Kevin prepare to take a pizza out of the fiery oven.

The fire in the brick oven reaches a temperature of 700 to 900 degrees - perfect for classic Italian pizza.

The drive-in movie this past weekend featured a new addition not offered at the previous summer events. Not only has Curbtender graciously partnered with the Sun Theatre to provide a venue for showing the outdoor films, but the company’s president - Mark Watje - also shared his culinary skills with those in attendance.

Though he grew up learning about business and marketing from his dad (Kevin), he also had a strong influence in the food industry from his grandparents. As owners of the Red Lantern Restaurant in Denison, Iowa for 20 years, his grandparents and their nine children did most of the cooking, cleaning, and service in the restaurant.

“It was a steakhouse that had pretty good notoriety including having won an award from the Omaha World Herald for their Oxtail soup,” Watje recalled. “Grandpa had a lot of unique items on his menu, including broasted African Lobster Tails that were so big that one tail had to be shared by two people.”

He said his father grew up cooking in the steakhouse and later worked in a pizzeria. “He seriously considered purchasing the pizza joint before getting into the equipment industry instead. As a result, my father was always cooking great meals at home,” Watje said. “His work would take him to some of the best restaurants in America. Growing up in that environment turned me into a foodie.”

Though he has joined his dad in the equipment industry, Watje has never lost his interest in food and cooking. “I love to travel and I experience new places through my taste buds. I’ve always loved Italian food - who doesn’t? In 2019, my wife and I celebrated our 10-year wedding anniversary in the Tuscany region of Italy. That amplified my love of olive oils, fresh pasta, balsamic vinegar, and classic Neapolitan pizza,” he explained. “We toured wineries, took in-home cooking classes, and feasted on anything that had truffles. After that trip I began cooking a lot more, especially fresh pasta. But getting the classic Neapolitan pizza requires heat. Lots of it! The home oven can’t quite match the temperature, smoke, and flame of the wood fired oven.”

Watje said an engineer friend shared some of his wood fired oven designs with him, and over the past six months he’s been slowly building his first pizza oven. He used that oven for the first time during the July 25 movie showing at Curbtender. “This should finally put to rest the speculation from my neighbors about the weird igloo shaped concrete dog house they think I’ve been building in my garage,” he laughed.

He says one unique thing about Italian cooking is that it focuses on quality of ingredients over quantity of ingredients. “They isolate strong natural flavors and present them in a way that lets them shine.”

In regards to pizza, Watje says there is no question that the classic Margherita is the winner. “It is simple yet bursting with flavor.” He described the process he used for making the Margherita pizzas that were served Saturday night.

“I processed imported Marzano tomatoes for the sauce, topped with fresh buffalo milk Mozzarella from Italy, and garnished with fresh basil from my garden. The dough, consisting of ultra-fine heat resistant flour, rested for almost 48 hours.”

He said the pizzas are hand formed to have a thick chewy ring with air pockets and a very thin center crust. “If done properly, the tip of the pizza should tilt down when held and you should see some classic charred bubbles on the crust,” he explained. The pizzas are cooked for less than three minutes at temperatures ranging from 700 to 900 degrees.

“I’m already thinking about plans for my next pizza oven, having learned from all my mistakes on the first one,” Watje said. “I’m considering integrating it with a food truck trailer so that I can periodically share my joy of great food with my fellow Gothenburg neighbors.”

He cooked about 30 pizzas for the Sun Theater event. “This was my first time publicly tipping my hat to my grandfather’s legacy. Of course, my father was by my side helping me make the perfect Margherita pizza,” he said. “I hope everyone enjoyed them.”