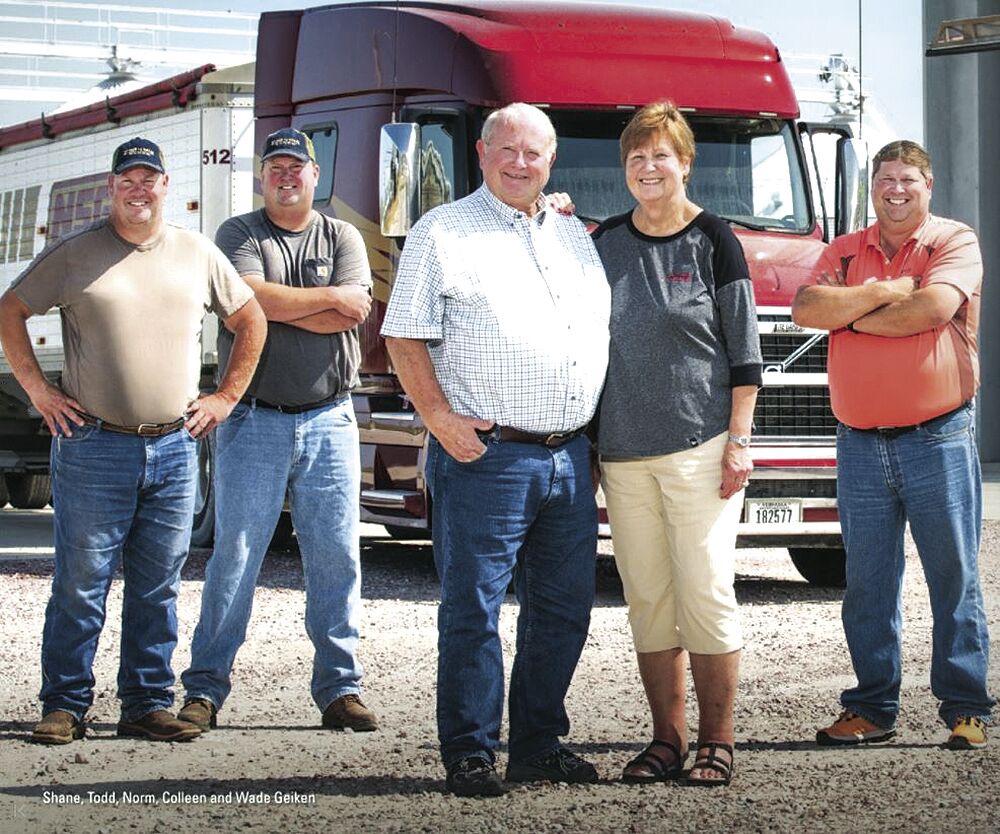 Norm and Colleen Geiken have retired from the business they built more than 50 years ago. Their sons - Todd, Shane and Wade will continue to work for the new owner of Nebraska Salt & Grain. 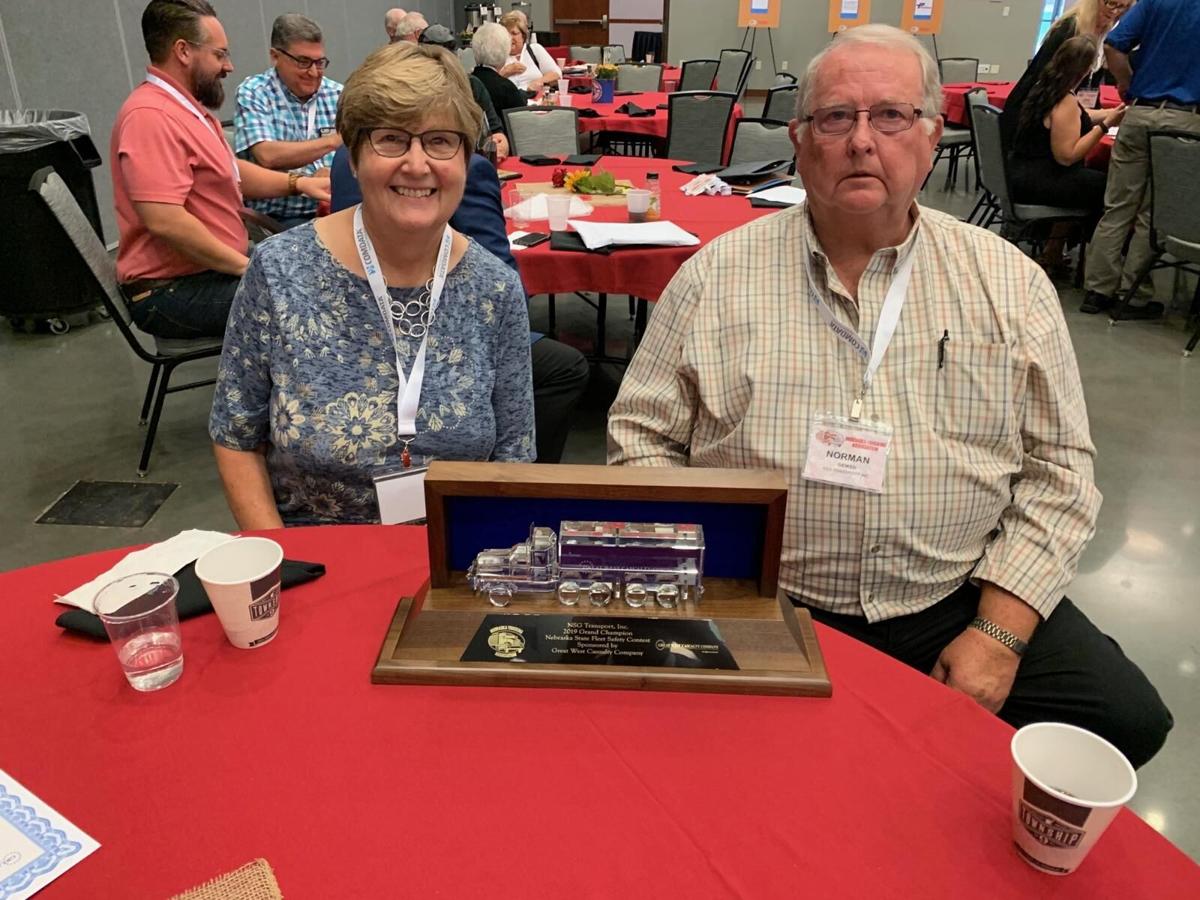 NSG Transport, Inc. was the grand champion of the 2019 Fleet Safety Contest sponsored by Great West Casualty Company. It is one of several awards they have won, including from the Nebraska Truckers Assoc. below left, but one that Colleen and Norm Geiken say they are very proud of.

For more than 50 years, Norm and Colleen Geiken have been in the buy, sell, and trucking business in the Gothenburg area. With the support and encouragement of their family, the couple has decided this would be a good time to slow down. Two weeks ago, the official papers were signed for the sale of the Geiken family business, Nebraska Salt & Grain. But all parties involved emphasize that ownership is the only thing changing.

Wade Geiken is currently the Chief Operating Officer for NSG. He has many fond memories of his childhood as his parents were building their company. “They actually started as Geiken Hay & Feed in the mid-to-late 1960s hauling hay for area farmers. That business then morphed into NSG in the early 70s,” said Wade.

He explained there has been some misconception about the company name over the years. “Many people thought the name stood for Norm S. Geiken, but that is not true. Back then when you incorporated you had to pick a business name that represented at least 30% of what that business did. At the time they incorporated they had a couple of trucks hauling salt and grain, so that was the name they chose,” Wade explained. And in case you were wondering, Norm’s middle initial is not “S”.

“I remember riding in the trucks with dad when I was a kid and he had some kind of phone mounted on the dash. He used that to communicate with mom on the loads - kind of their early dispatch system,” he recalled.

Throughout the next decade, the business continued to grow as Norm and Colleen raised their three sons: Wade, Shane and Todd. Wade was just starting his senior year of college in Dallas, Texas in 1988, when he received an unexpected phone call from his dad.

“He told me his grain buyer and scale guy had just given their notice, and either I had to come back and help build the business or he was going to have to shut it down to where he could run it on his own. He gave me two days to decide,” said Wade.

Wade said the company sent down a convertible trailer to get him. “So I loaded my car and all my possessions into a truck and came home, and I’ve been here ever since.”

NSG Transport, Inc. was the grand champion of the 2019 Fleet Safety Contest sponsored by Great West Casualty Company. It is one of several awa…

His brothers both followed suit and returned to the family business after finishing college. Together the Geiken men and their wives, along with the entire group of trusted employees, have built the solid business that is well-known and respected across the Midwest today. “Dad’s motto has always been, ‘Don’t stand still.’ So, we always keep evolving. With each trade cycle on the trucks we would add at least one more,” said Wade, explaining his dad’s philosophy for growing his fleet.

NSG now transports salt, grain and aggregate primarily throughout the seven-state Midwest region of the U.S. They run 49 tractors, more than 60 trailers and employ about 75 people. That is a big impact on the community of Gothenburg. The Geiken family has always been very supportive of their community and school as well.

“The diversity of this company is what keeps steady work all year round. And we have great employees - the average tenure here is 10 years, and we have several employees who have been here 20 and 30 years, and longer. That’s impressive,” said Jonathan Green, CEO of Instar Holdings, the company who recently purchased NSG.

Green praised the Geikens for the growth the business has experienced over the past 30 years. In the late 80s when Wade joined the business, NSG had about 12 grain bins with storage capacity for around 600,000 bushels. Today that capacity has grown to nearly 2 million bushels.

With a background in logistics, Green said he is excited about becoming part of this business and the community. “Our vision for NSG is not to buy, build and flip...it’s long-term growth,” said Green. “We spent from February to August doing our due diligence to make sure this was the right direction for both parties.”

The Geikens did the same thing. Wade explained that once his parents had made the decision to sell, they began seeking a potential buyer that would maintain the same culture that had been established in the early stages of the company. They feel very comfortable they have found that with the Fort Worth based company, Instar Holdings.

“We are looking at growth in a couple of different areas including both medium and long-term growth opportunities,” explained Green. “Instar Holdings will continually look for ways to keep NSG growing.”

Green stressed that Instar Holdings plans to retain 100% of the current NSG employees. “Other than a retirement, we have not lost any employees through this transaction. We plan to keep everyone we have as well as add to them.”

The name will also remain the same. Both Wade and Green shared stories of the good reputation the NSG brand has earned throughout the years, and that is something Instar wants to build on - not change.

Though Norm and Colleen are planning to retire from the daily NSG operations, they will certainly not lack for things to do. The family also operates a large farm and ranch operation which will now be headquartered in the former downtown NSG business office building on 10th Street. The NSG business offices are now located on West 16th Street.

Norm will also stay on as an advisor to the board. “He has lots of experience, expertise and wisdom, and we plan to draw from that,” said Green.

As for Wade, he said this sale is an opportunity for the whole family to step back just a little while still doing what they love. It seems to be a win for the Geikens, a win for Instar Holdings, and a win for the community of Gothenburg.