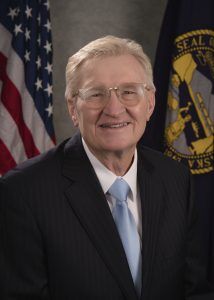 Eight districts comprise the State Board of Education, with District 7 covering half of the area of Nebraska. Representing District 7 on the board is Robin Stevens of Gothenburg.

Eight districts comprise the State Board of Education, with District 7 covering half of the area of Nebraska.

Eight districts comprise the State Board of Education, with District 7 covering half of the area of Nebraska. Representing District 7 on the board is Robin Stevens of Gothenburg.

Eight districts comprise the State Board of Education, with District 7 covering half of the area of Nebraska.

When conducting student testing or implementing curriculum, school districts often refer to “state standards.” Some may question just what state standards are, and the even bigger question...who sets the standards? The answer to that question is the Nebraska Department of Education.

Since its inception the Department of Education has set standards for core subjects such as English language arts, mathematics, social studies and science. Within recent years the board has also approved standards in several non-core areas such as fine arts, physical education, world language, and career and technical education. Currently the board is working on a draft to establish state health standards for the first time, and that action is creating a lot of buzz.

Statewide oversight of education in Nebraska began in February 1869 when the Legislature created the office of the state superintendent of public instruction. A 1952 constitutional amendment established a State Department of Education, which acts under the authority of the State Board of Education. The 1967 Legislature divided the state into eight districts, and the membership of the State Board of Education was increased from six to eight members effective January 1969. The districts were realigned by the 2011 Legislature, but remained with eight members. The board is elected on a non-partisan ballot, with one member from each district. Board members serve four-year terms. Board members are not paid, but are reimbursed for their expenses.

Eight districts comprise the State Board of Education, with District 7 covering half of the area of Nebraska. Representing District 7 on the board is Robin Stevens of Gothenburg. He was elected to the board in 2018, and has been a professional educator for 40 years. He has served in almost every capacity…teacher, coach and administrator. Robin said he considers it an honor to represent the people of the 7th District on the board and encourages patrons of the district to share their questions and concerns with him.

A first draft of the proposed State Health Standards has been created and Stevens said the board is tentatively planning to vote on the document this fall. However, he wants to inform the constituents in his district of the process of adopting those standards - which is far from a done deal.

“During the 2018-19 school year a Youth Risk Behavioral Study was sent to random Nebraska Schools,” Stevens explained. “I do not know the number of surveys that were returned to NDE, but I do know this was one of the resources that influenced the writing of the health standards. The Nebraska Writing Team did a study of literature and contacted experts in the field from across Nebraska, called the Advisory Council. The process that is being used for the Health Standards was used to create all previous non-core standards.”

The status of the proposed State Health Standard remains in the initial first draft phase. That means the door is open for the public to share their input. Stevens explained that variables such as the amount of input each draft receives will determine the number of drafts that will be created. As a point of reference, the core Social Studies Standards had three drafts.

Another important thing to know is that once the state board approves the health standards, local school districts – public and private – do not have to adopt them. Local districts must have standards, sometimes known as guidelines or frameworks, for all non-core areas offered. National standards, locally created, or all or part of the State Standards are acceptable. However, the curriculum should align with the locally approved standards.

Stevens said that Lacey Peters and Cory Epler are the NDEs leads on the health standards and are available to answer questions and listen to public input. They can be contacted at lacey.peters@nebraska.gov and cory.epler@nebraska.gov.

To contact Stevens you may email him at robin.stevens@nebraska.gov.

For more information, visit the NDE website at education.ne.gov.