Skip to main content
You are the owner of this article.
Edit Article Add New Article
You have permission to edit this article.
Edit
Home
News
Sports
Brady Bulletin
Local Events
Galleries
Birth Announcements
Obituaries
Classifieds
e-Edition
Contact Us
Share This
1 of 4 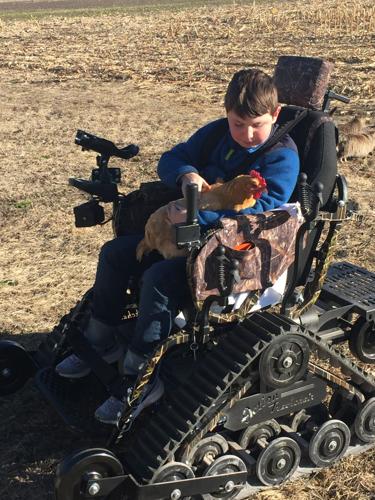 Cade is thrilled to now be able to visit his chickens whenever he wants. 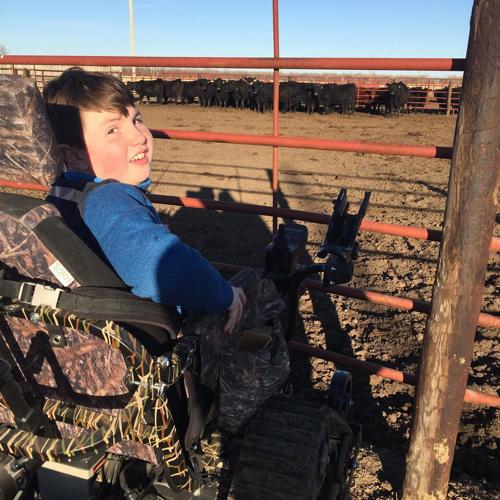 Cade Atkinson drives his track chair out to check the cattle, something he has not been able to do for a long time. 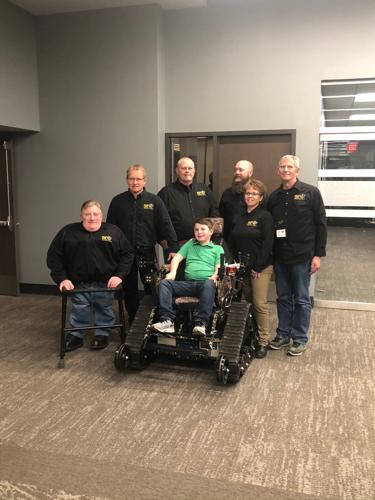 Members of the Heartland Dallas Safari Club pose with Cade after presenting him with his new track chair. 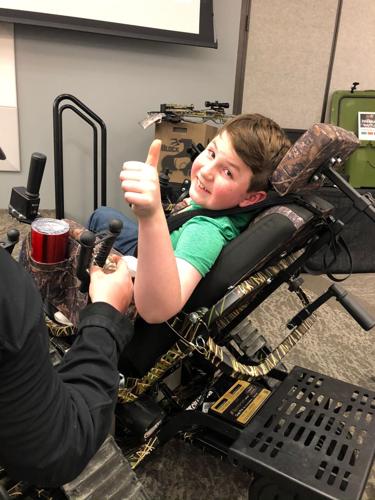 Cade Atkinson is all smiles and gives a thumbs up as he tries out his new track chair. 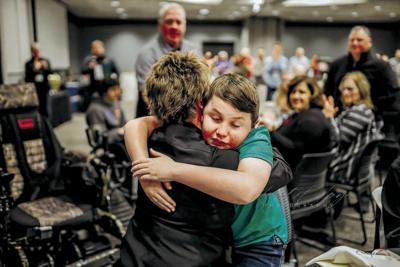 Cade is thrilled to now be able to visit his chickens whenever he wants.

Cade Atkinson drives his track chair out to check the cattle, something he has not been able to do for a long time.

Members of the Heartland Dallas Safari Club pose with Cade after presenting him with his new track chair.

Cade Atkinson is all smiles and gives a thumbs up as he tries out his new track chair.

The freedom to go outside and play in the snow and mud whenever they want, is something most 11-year-old boys take for granted. That kind of freedom is something that Cade Atkinson has not experienced for a few years, but because of one group’s generosity that has changed.

On Feb. 15, Cade and his parents, Brent and Lynnette Atkinson and big brother, Cole, attended a banquet in Omaha for the Heartland chapter of the Dallas Safari Club. While Cade thought he had received an invitation to the banquet for a totally different reason, the club used the opportunity to present him with a mobility device that will give him back the outdoor freedom he has been missing. It was an emotional experience for everyone in the room.

In the Spring of 2016, Lynnette and Brent Atkinson began taking their little boy to doctors for a series of tests that would eventually lead to a diagnosis that no parents ever want to receive. Cade has Duchenne Muscular Dystrophy.

Lynnette said they had known since he was little that Cade had some struggles with coordination and going up stairs. When someone mentioned to her the possibility of MD they began checking into it. The first stop was for a blood test at Gothenburg Health to check Cade’s CK level. This test measures the amount of creatine kinase (CK) in the blood. CK is a type of protein, known as an enzyme, and is mostly found in your skeletal muscles and heart, with lesser amounts in the brain.

If the level was elevated, which it was, it would mean further testing. The family was referred to Children’s Hospital in Colorado where genetic testing was performed, and where the diagnosis was confirmed.

Duchenne is a genetic disorder with progressive loss of muscle. It is caused by a mutation in the gene that encodes for dystrophin, the protein that is necessary for proper functioning of muscles.

“Cade is missing exon 45. It’s like doing the wave but having a hole right in the middle. The wave tries to continue on after, but things get a little messed up,” explained Lynnette.

Approximately ⅔ of the time Duchenne is genetically passed down through the carrier mom; however, ⅓ of the time it just randomly occurs. Lynnette has undergone genetic testing and she is not a carrier.

Since his diagnosis Cade has done his best to keep up with the other kids his age, especially when it comes to his favorite thing - being outdoors. He enjoys helping out around the farm and loves to go hunting with the family. However, with each passing season that has become more and more difficult for him.

THE HUNT OF A LIFETIME:

In October 2019, the Dallas Safari Club (DSC) gave Cade his first surprise from them. They arranged for a guided Elk hunt in New Mexico for the young man.

“One of the missions of the DSC is to get kids outdoors,” said Lynnette. In an effort to make the outdoor experience more accessible for all kids, the club purchased an action track chair which they loan out to young people whenever they can. Cade had requested the use of the track chair to go deer hunting with his dad and grandpa last Fall, but DSC wanted to do more.

“They decided to provide him with his dream hunt, and contacted Northern Extreme Adventures in Taos, New Mexico to arrange the event,” Lynnette said. “Together they offered an all-expense paid trip for Cade to hunt a bull elk. And Pony Express Chevrolet in Gothenburg donated the use of a vehicle for us to take to New Mexico. Cade got a 6x6 bull elk - he was so excited!

“Cade is an animal lover, but he knows that when we hunt we are providing meat for our family,” Lynnette continued. “By doing this he gets to be outdoors and provide for the family - two things he loves.”

Shortly after returning home from New Mexico, Corey Goss - president of the Heartland DSC - contacted Lynnette with some big news. “He called and said they wanted to provide Cade with a track chair of his own,” she said. “In just four months DSC fundraised the $18,000 to purchase the chair so they could present it to him at the banquet.”

Thinking he had received the invitation so he could thank the club for his experience and encourage more such hunts for other kids, Cade was totally blindsided when a member of DSC drove the track chair out and gave it to Cade.

“He was completely surprised,” said Lynnette. “They showed a brief video of his hunt that led into presenting the chair. It was a pretty surreal experience. Everybody was crying. And we didn’t even know most of the people there.

“Cade was so overwhelmed - he knew what it meant. It meant getting his freedom back,” she continued. “He is no longer limited to going out on days when there isn’t mud or snow. When we got home he nearly fell out of the car trying to get to the chair. As soon as it came off of the trailer he got on and went out to check on his chickens. Then he came back and said, ‘Dad! I’m gonna go water the cows!’ He was so excited. He can do so many more things now than he could before.”

In an effort to give back, Lynnette is working on organizing an event between DSC and other Duchenne’s families where DSC can bring the track chair so those kids have an opportunity to try it. “We want to be able to provide the same opportunity for others as Cade has had,” she said.

"Cade was so overwhelmed - he knew what it meant. It meant getting his freedom back. He is no longer limited to going out on days when there isn’t mud or snow."