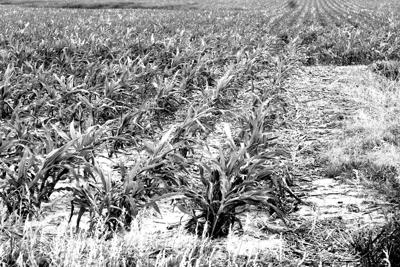 Catherine the Great once said that a great wind is blowing and that gives you either imagination or a headache. For area farmers, the wind has provided quite a headache as they took time to survey and recollect after sustained winds of 40 miles per hour and gusts of nearly 70 miles per hour swept across the land earlier this month.

Nebraska Extension Educator Sarah Sivits said that as questions arise about the ability of any crop to survive wind damage there are a number of factors to consider.

“The first thing producers need to do is determine how much damage was sustained. Several fields were planted early this spring, but emergence may have been a little slow due to cold temperatures,” Sivits said. “Plants have an amazing capability to recover, but it may be slow and the plants may not look too hot. They may have leaves that were shredded or wrapped around the plant, especially in corn or grass-type crops, which may delay regrowth.”

Eventually, the plants should grow out of it, she said, and plants that were a little further along should recover depending on the damage that was sustained. For corn, the growing point is above the ground when 6 leaves are exposed, which makes them more vulnerable to wind damage, but Sivits said it should grow pretty well considering the rain we have recently received and the wind dying down in the past few days.

The difficult thing about excessive winds, like those we saw in Dawson County, is the temperature.

“It was very hot,” Sivits said. “That added more stress to the plants as they were losing water and soil moisture was limited. A combination of wind, heat and drought stress is never a great scenario for plants.”

Sivits went on to add that many producers in our area have the capability to irrigate if needed, and that does help, but there is a downside to that watering technique in the face of wind.

“The unfortunate part of using overhead/center-pivot irrigation in high winds is that sometimes it gets blown away and evaporative losses are high,” she said. “There is water in our subsoil, but heat and high winds caused soil moisture to evaporate in the topsoil. Plants that are young don’t have quite enough root establishment to grab onto moisture deeper in the profile, which also adds more stress.”

Replanting is an option for producers who have sustained damage, but considering the time of year, that is a difficult decision to make.

“We are getting really late in the year to consider replanting,” she said. “For corn, our maximum yield potential would be significantly reduced right now depending on the variety, growing conditions, environment and what the farmer intends to do with it.”

Some might be able to replant corn, and use it for silage, Sivits said, but it’s going to depend greatly on what type of corn is planted, if the replanted corn will be mature enough to harvest and if it will insole properly at the targeted moisture. She went on to say that crops like soybeans have a great ability to compensate for low stands because they can produce more branching to capture more sunlight and produce pods.

Research in Nebraska has shown that soybeans that are planted earlier in the season are able to capture more sunlight and have more growing degree days accumulated. This leads to higher yield potential.

For those who sustained considerable wind damage, having their insurance adjuster take a look at the damage would be helpful in deciding next steps.

Another part of what will play into the field’s ability to recover is the amount of erosion it sustained over the course of the wind storm, and Sivits said that there are yet more factors to consider.

That damage, Sivits said, is a gateway for another issue that arises at Mother Nature’s hand.

“The hard part with wind damage is the potential for disease development,” she said. “Open wounds can allow an easy pathway for diseases to enter the plant and initiate infection.”

She went on to say that the field’s condition and the field’s history play a huge role in the susceptibility of the crop for the disease.

“If the field has a history of certain diseases, it’s important for producers to scout regularly after a wind event to see if the early season diseases could be an issue,” Sivits said. “Some of these diseases cannot be managed as easily, especially if they are bacterial diseases.”

Fungicide application helps to manage fungal pathogens, and Sivits said an early application is an additional cost. And in consideration of current market prices, producers will need to consider if the additional cost will be beneficial to their bottom line.

Ultimately, erosion can be managed, Sivits said, but it largely depends on the producers’ goals, their fields, the soil texture, topography and water availability. While many producers have gone the route of no-till in order to help decrease the possibility of erosion, others prefer to use strip-tillage or minimum tillage/conservation tillage practices. In addition to that, erosion can be managed by planting the crop in certain directions in the field or by using a cover crop.

While the decision to use cover crops varies widely, Sivits said her best advice is for producers to speak to their local NRCS office to discuss if cover crops would be a benefit for their operation on a field-by-field basis.