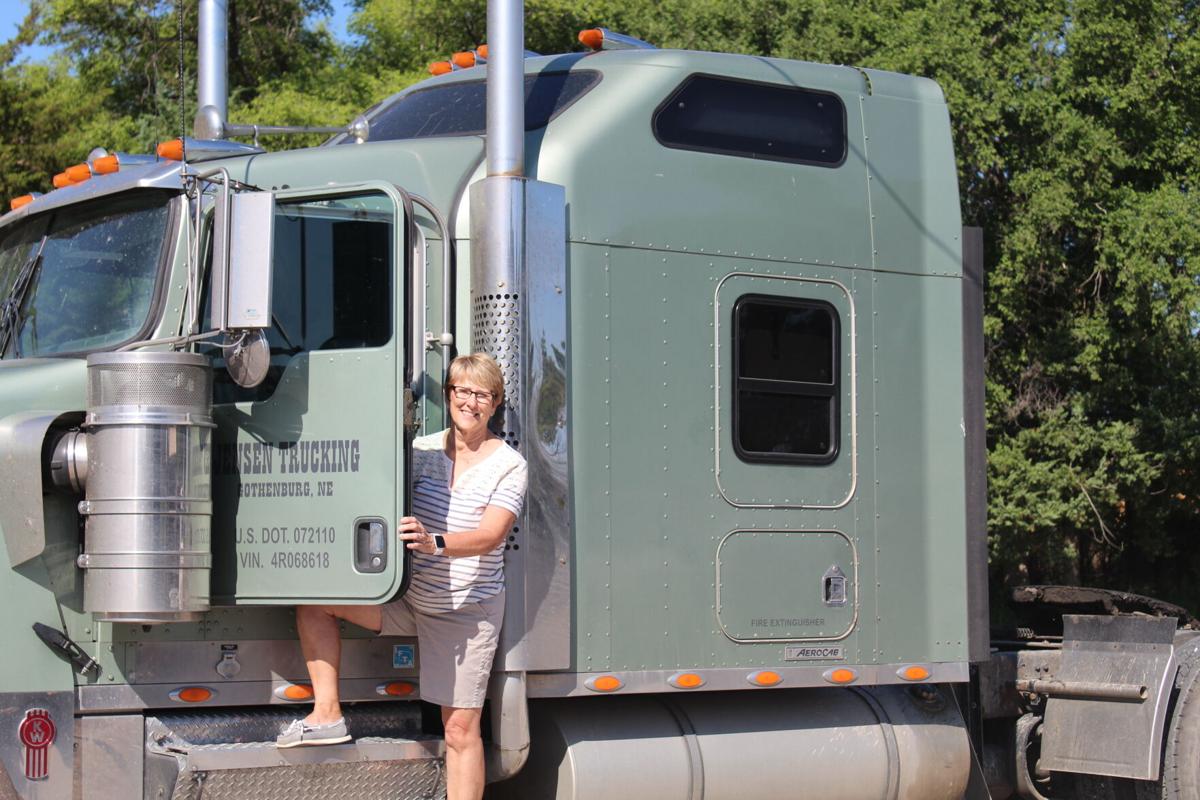 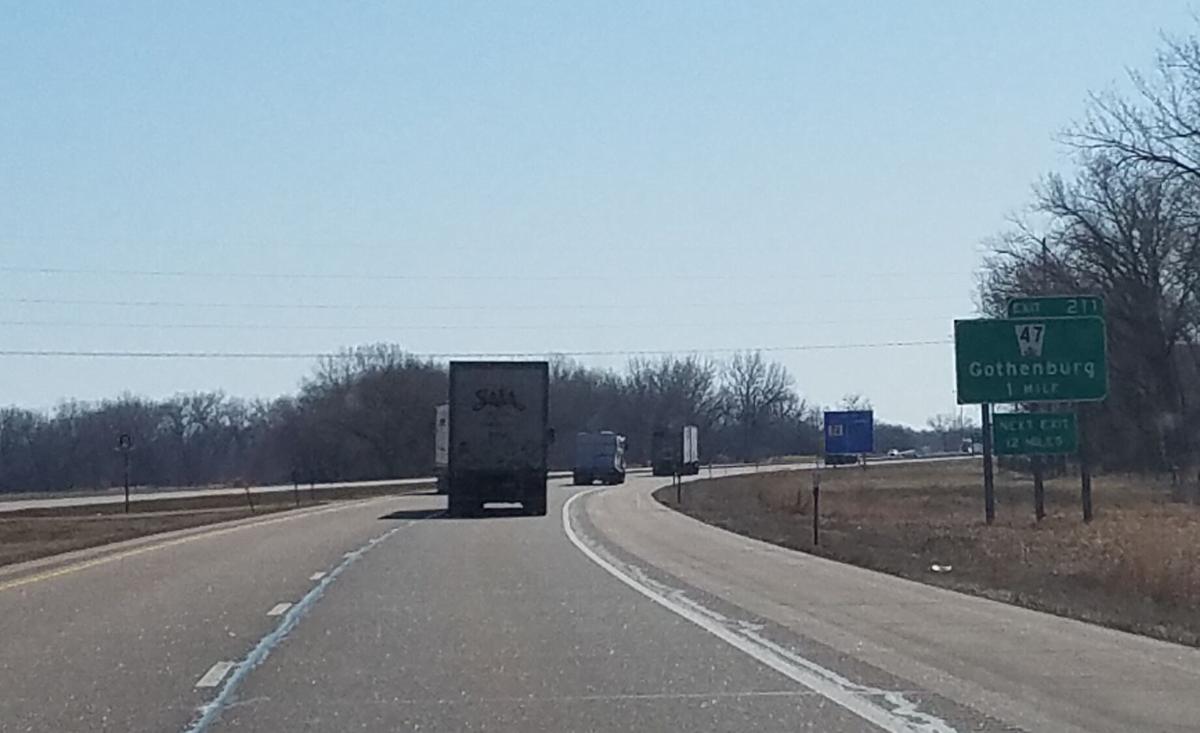 With our location right along Interstate 80 semi-trucks are a very common site. Sometimes what those large tractor trailers are hauling is obvious from the signage and logos on the outside of the trailer, but often all we see is a box on wheels. Cruising past truck after truck on the interstate may find one questioning - what is in there? Where did that truck come from and where is it going? And what is the impact of this industry to our national and local economy?

According to recently released statistics from the U.S. Census Bureau, more than 3.5 million people work as truck drivers. It is an occupation dominated by men who hold more than 90% of truck driving jobs.

In this male dominated industry, the Census Bureau reports that women-owned trucking firms account for less than 10% of the businesses, but they have an average revenue higher than those owned by men. Of that low number of women-owned firms, one happens to be located in Gothenburg.

Joyce Hudson began working for Lonnie Jensen, owner of Jensen Trucking, in September 1974 - shortly after he established his business here. Hudson operated the front office and said she spent the next 25 years learning the ins and outs of the business. When Jensen unexpectedly passed away in 1999, the future of the company was uncertain.

“It was do or die time. I had been involved for 25 years by that time, so I decided to give it a try,” Hudson said as she recalled her decision to purchase the business.

Jensen Trucking is a long distance, over the road company, moving freight in enclosed trailers (refrigerated trailers and dry van trailers) in 40 states. Hudson dispatches the majority of the loads herself. “We have been very fortunate with maintaining our workforce,” said Huson. She said her company has also been lucky enough to see little or no effect on the business due to the pandemic. “There was an adjustment period back in March/April when plants were having issues with absentee issues due to Covid. Consequently, production was slowed down. But since then we are back to normal if not better,” she said.

It is obvious by traveling our roadways that there are more trucks being used for transport than ever before. Hudson said she does not see that decreasing in the future and finding available drivers could be a challenge. She is not the only one with that opinion.

Eric Shonka is the General Manager for the Western Region of 10 Roads Express trucking company. Based in Iowa, 10 Roads Express operates from 36 terminals all across the country. With I80 being a main corridor, the company located a shop in Gothenburg under Hoovestol, Inc. about 20 years ago.

Earlier this year, a number of multiple individual trucking companies owned by Hoovestol were merged into one company - 10 Roads Express. “We are a mail hauling company, and haul mail all over the country including Alaska,” Shonka explained. “The core of the business is mail.”

He said the company runs a lot of trucks between Denver and Des Moines so it’s nice to have a shop in Gothenburg. “The shop services trucks that run the I80 lane anywhere from Cedar City, Utah to Des Moines,” said Shonka. The Gothenburg shop currently employs two full-time mechanics and are looking to hire a third.

10 Roads Express has drivers in every state except Hawaii, and Shonka said the company employs about 85 drivers in Nebraska. “Keeping our positions full has been a challenge,” he said. “Last year at this time we had drivers looking for work; now that the economy is opening back up there are more jobs than there are drivers. Our biggest focus is probably on hiring drivers.”

Shonka said the average age of employees in the industry itself continues to grow older. Location also seems to be a factor in hiring as well. “Hiring in places like North Platte is a little easier than some of the bigger cities. We are always looking for drivers - it’s a great company to work for.”

Statistics seem to support what these industry owners and managers are seeing. The Census Bureau shows that truckers are older on average than workers in other industries. Their median age is 46 compared with 41 for all workers.

More than 2 million people work in the truck transportation industry, which not only employs truck drivers but also mechanics, managers, dispatchers and workers in other occupations. Nearly 1.5 million people work for the 124,320 employer businesses in this industry, and another 587,000 are self-employed, or “non-employers” according to the Census Bureau. Between 2012 and 2016, the number of trucking businesses grew 15.9%, outpacing total growth across all industries. This translates into an increase of 200,000 workers in the trucking industry during that time period. That can make finding drivers and keeping them a challenge - and makes guys like Tim Gibbens of Skyview Transportation thankful for their staff.

Skyview runs hopper trailers to all 48 states and Canada, transporting grains and food products. Apples, onions, and potatoes are hauled in the Skyview trucks - as well as pet food products and feed products. They even haul ground coal to Anheuser-Busch that is used to manufacture bottles.

Gibbens told the Leader in a previous interview that the company currently runs about 64 trucks out of Gothenburg. That is a lot of drivers - and most of them are on the road for three to five weeks at a time. The company averages 3,000 to 4,000 miles every week on the road, with drivers from all across the country.

Although many of the nation’s truckers work a regular 40-hour workweek, almost half of truckers work longer hours. In comparison, about a quarter of workers in all occupations work more than 40 hours a week. The most recent census figures show that on average, truck drivers working full time, year-round, earn about $43,252 annually, lower than the median for all full-time workers ($47,016), but exceed those of other blue-collar jobs.

At least one in 10 truckers are veterans, double the rate of workers in general. Even accounting for its large proportion of men and older workers, truckers still outpace other occupations as a destination for veterans.

Trucking provides a critical infrastructure for economic activity. According to the U.S. Census Bureau’s Commodity Flow Survey (CFS), trucks transported 71.6% or $10.4 trillion of the $14.5 trillion of the value of all goods shipped in the United States in 2017, the latest year for which statistics are available.

The semis and 18-wheelers we see on our local roadways could be delivering goods to another town just up the road or all the way across the United States. More than ever, truckers and the trucking industry move goods across the nation and within our towns and neighborhoods. As the trend towards e-commerce continues, the trucking industry and its workers will continue to provide a critical infrastructure for our nation.