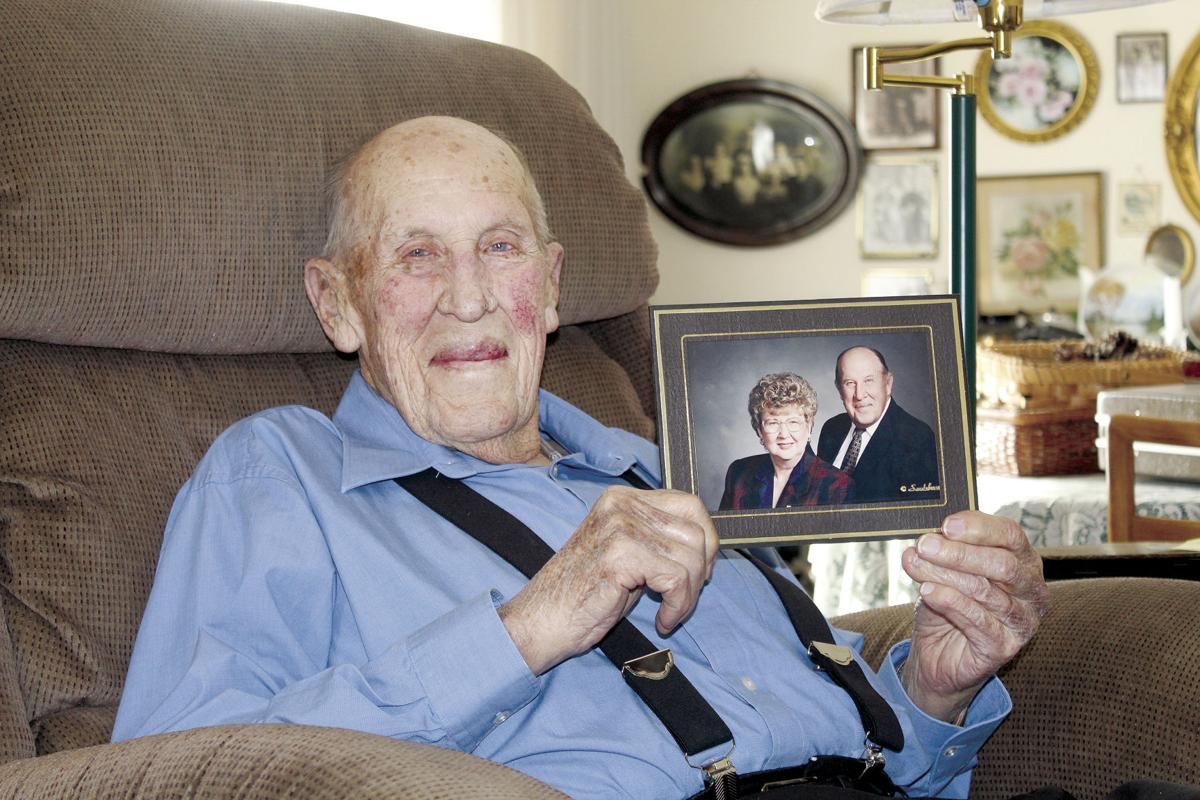 Burton McPheeters of Gothenburg holds a photo of him and his wife, Betty. She was diagnosed with Alzheimer’s Disease 10 years ago, and now resides in Cozad. 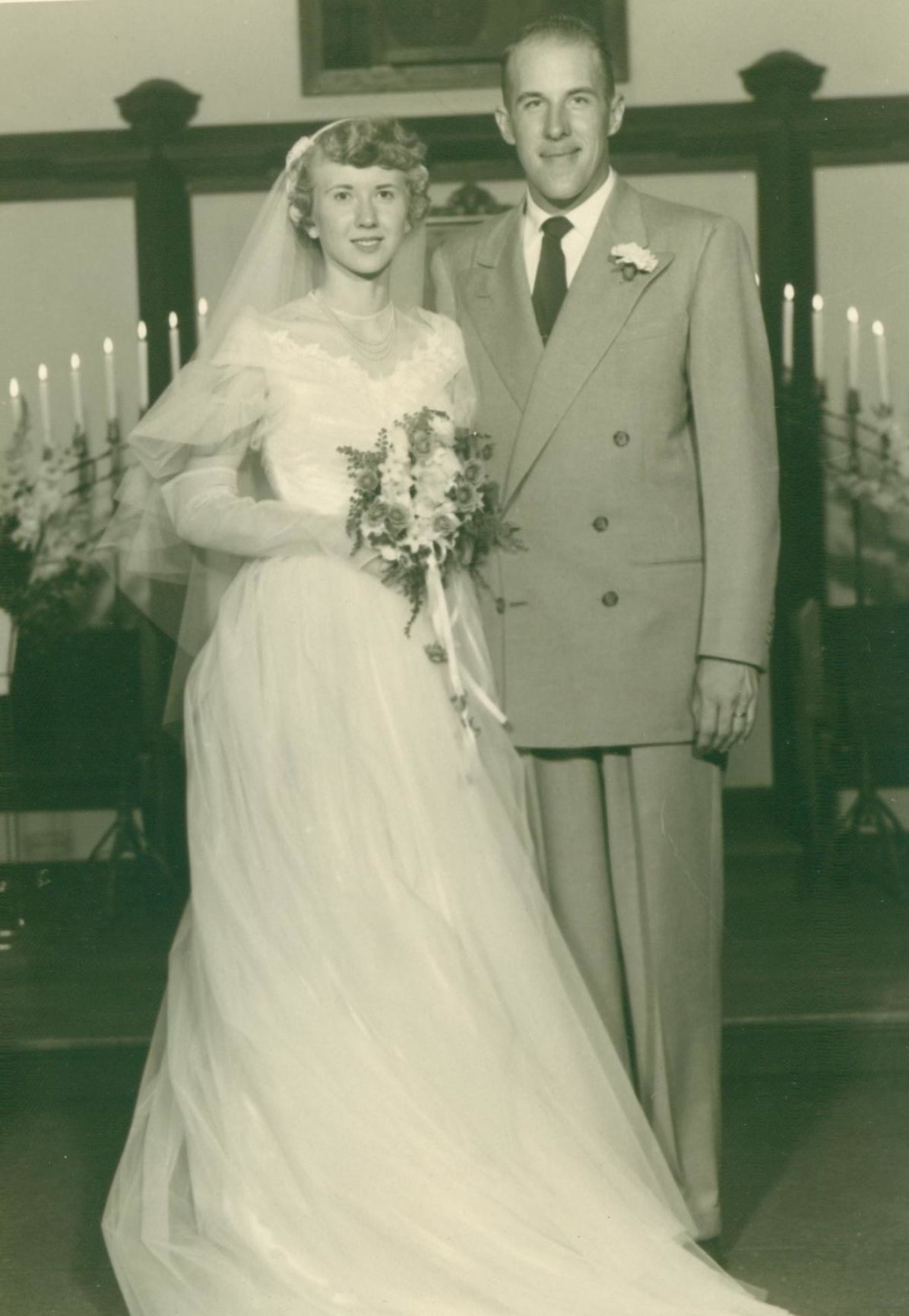 Burton McPheeters of Gothenburg holds a photo of him and his wife, Betty. She was diagnosed with Alzheimer’s Disease 10 years ago, and now resides in Cozad.

Sixty-seven years ago Burton and Betty McPheeters vowed to love one another through good times and bad, in sickness and in health. They meant it.

As Burt sits in the living room of the home where he and Betty spent most of their married lives, the home he was born in 92 years ago, he is surrounded by family photographs and memories of the life they have shared. About three years ago Betty’s health forced the couple to have to live separately, but Burt remains as devoted to his wife now as he has always been. He resides at Stone Hearth Estates, she is at Emerald Nursing & Rehabilitation in Cozad - and he makes the trip to visit her at least once a week.

“I had admired her from a distance for awhile, as she was teaching at a nearby school,” said Burt, reminiscing about the beginning of his relationship with Betty. “Our first date was to a motion picture in North Platte. We sort of had a date from then on.” He said that they would end their dates by making plans for their next date, so they always kind of had a date.

The couple had been dating for 14 months when Burt received his draft notice in March 1951. “I was fortunate and spent my time in the states,” he said.

On Aug. 31, 1952, Burt and Betty were wed in Cozad. With only six months left to serve in the Army, the newlyweds moved to Kansas where Betty attended Kansas State University for a semester. “She always wanted to go to college, so she took classes she was interested in, like chemistry and economic geography,” said Burt.

Talking about his wife seems to be one of his favorite topics of conversation, as he shared about Betty’s life-long love of the arts. She enjoyed painting and drawing, and did the illustrations for her high school yearbook. She took summer classes at Kearney and the University of Nebraska-Lincoln and during one summer she had the opportunity to have the lead role in one of the theater department’s play productions.

After his discharge Burt went back to farming on the place where his father had farmed, which was on the same section his grandfather had established. Farming is a way of life Burt has always loved. He recalls farming and doing field work with horses, and getting his first Farmall after the war.

“It was my job to feed and water them, then turn them out at night, then feed and water them again in the morning and help harness them,” Burt recalled. “I picked 40 acres of corn by hand with horses the first year after I graduated from high school in 1945.”

Betty and Burt became parents to five children over the years: Marcy, Kay, Britt, Scott and Julie. Betty gave up her job teaching school after she and Burt were married, and along with her full-time job of raising a family she pitched in where and when she could on the farm.

Betty loved to entertain. “I could tell her a dozen people were coming for dinner an hour ahead, and she would be ready,” said Burt. “She always made everything look so pretty.”

Though she loved entertaining any and all guests, nothing brought Betty more joy over the years than filling the house with family. The couple has 18 grandchildren, all born within an 18-year time frame. During the summer break from school the house would often be filled with laughter and kids.

“We’ve had more than 20 people sleeping at our house at one time,” Burt recalled.

Over the years Betty and Burt had opportunities for quite a bit of travel - one of their favorite pastimes. Their youngest child, Julie, spent some time living in Europe, and the couple was able to visit that area with her. They have also traveled to the Holy Land, China, Australia and New Zealand, and all over the U.S.

“We always enjoyed a lot of the same things, and have always supported each other,” said Burt, when asked what he thinks has led to their many happy years together. “We just enjoyed being together.”

However, Burt said probably the most important thing a couple should have in common is a strong Christian faith. He said that means getting involved in a church, and making God the center of your marriage. “And each person must go more than halfway,” he added. “You both have to be willing to do more than your share to make things work.”

Their son, Scott, now farms the place with his family. Burt is proud of the fact that there have now been five generations of McPheeters continuing that legacy. He beams with pride as he points out the family photos on the walls of the farm house he still drives to nearly every day.

“It’s very hard to not be here, but I’m thankful I’m still able to come to the farm part-time,” he said.

As the memories continued to flood his mind, Burt remembered a special one he wanted to share. “Valentine’s Day has always been special for us,” he said. “We had only been going together for a month on our first Valentine’s, and I went to visit my sister in Sioux City, Iowa. I found an especially pretty box of candy for Betty, and I thought that would really impress her. And it worked.”

"I found an especially pretty box of candy for Betty, and I thought that would really impress her. And it worked. "