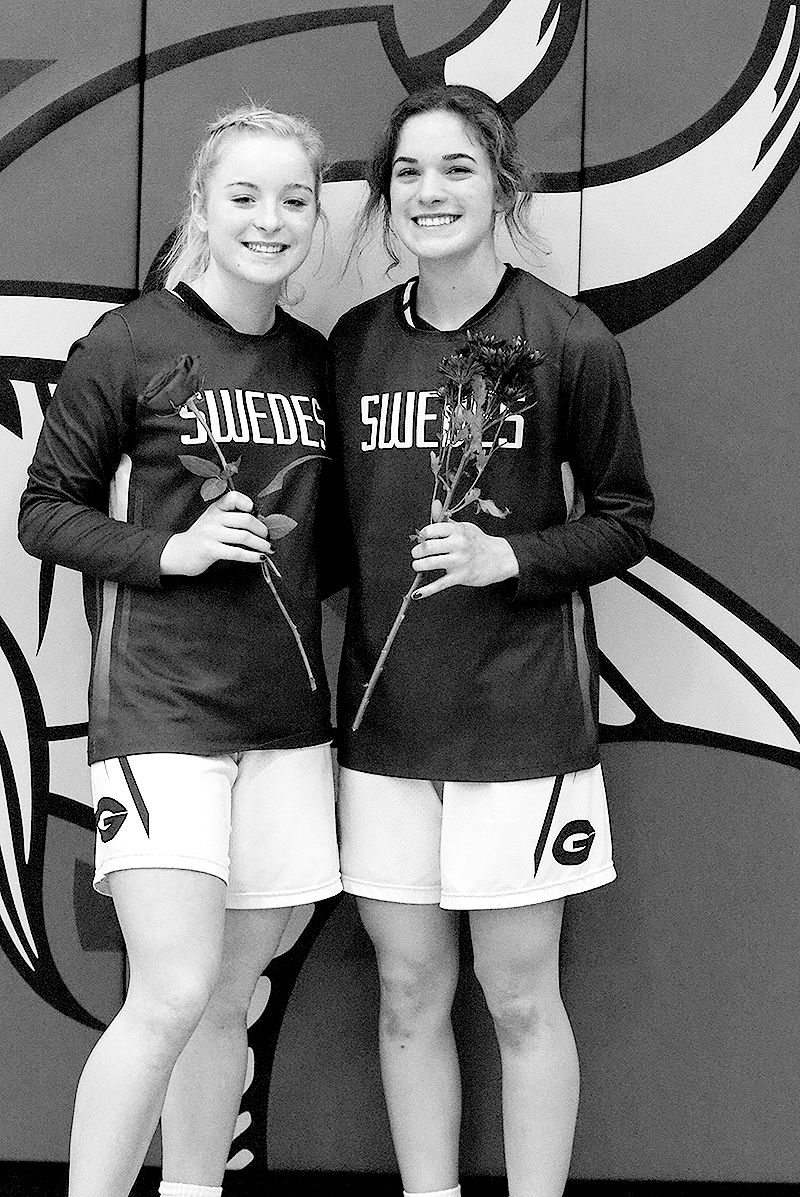 Amya Bliven, left, and her sister Alexis are sisters and friends.

Annica Harm, left, and her sister Ellarey share a laugh as they are introduced during parent’s night.

Amya Bliven, left, and her sister Alexis are sisters and friends.

Annica Harm, left, and her sister Ellarey share a laugh as they are introduced during parent’s night.

For many sports teams, the ones you go to battle with in the field of competition become your family.

You endure the highest of highs and the lowest of lows as you compete to win games and bring glory to the banner across your chest.

For the Lady Swede basketball team, the meaning of family within the team is beyond what happens when these girls suit up.

Annica Harm is a junior on the basketball team, and her younger sister, Ellarey is her freshman teammate.

The Harm sisters say that playing together gives them an opportunity to make each other better.

“I know I”m harder on her than the rest of the younger girls because I know her potential,” Annica said. “At home, I see the work she puts in so I know what she’s capable of.”

Ellarey and Annica played golf together this past fall, the first season they were teammates.

Annica said that being a teammate to her sister on the basketball court is completely different than being a co-competitor on the golf course, and while it’s a new experience for her she doesn’t hold back when she’s trying to help her younger sister do the best she can.

“Sometimes Annica is not the nicest but she always wants the best for me and she wants me to be the best I can,” Ellarey said. “It’s helpful, but I don’t always take it as helpful.”

While playing on the same team as your older sister can be fun, it does provide some challenges as well.

Ellarey said that playing alongside someone with Annica’s court presence can be a hard task when you’re trying to make your own name.

“Sometimes it’s challenging,” Ellarey said. “I’m in her shadow, but I learn from her. It’s helpful.”

Because the Harm girls play the same position, they are often matched against one another during drills at practice.

That has it’s benefits, Annica said, because the sisters know how the other thinks which makes it easier to talk things through.

“The other day, coach was trying to tell Ellarey something and I could see she wasn’t comprehending, like I could tell she didn’t know what he was trying to say,” Annica said. “I pulled her aside and told her the reasoning behind what he was saying and she picked it up better. I just know how she thinks and can help her through things easier.”

Annica and Ellarey agreed that they are more competitive with one another than the other girls on the team, simply because they want to push one another to be better.

“Sometimes she gets a little upset when I block her,” Annica said with a laugh. “But she blocks me more than I block her.”

The Harm sisters aren’t the only duo on the court that share the same last name.

Alexis Bliven is a junior guard and her sister, Amya is a senior guard for the Lady Swedes.

Because they are so close in age, the Bliven sisters say they’re not like a lot of sisters who play the same position.

“We honestly get along really well,” Alexis said. “It’s easier to work with someone who you’re with every day. And it’s not that different on the court.”

The Bliven sisters are not only sisters, but they’re also friends who take a stand when the other is in their opponents’ crosshairs.

“We stick up for each other, especially against our opponents,” Amya said. “I know I’m really defensive if someone were to push Alexis down.”

Talk about what went down on the court isn’t something they take home with them, the Bliven sisters said.

“It’s mostly our dad who wants to talk it over,” Alexis said with a smile.

With this being Amya’s last season, Alexis said she’ll miss having her sister on the court with her.

“I will miss her competitiveness and her attitude on the court,” Alexis said. “Sometimes she’s super funny, I like when people are that way. You don’t have to be serious all the time.”

Amya said she might be graduating but she’s going to be one of the most vocal in the stands for her sister next year.

“I will be there watching her games,” Amya said.

The Lady Swedes have sisterhood in spades, both in family bloodlines and in teammates on the court.

They are a family.

“I love it,” Alexis said of having her sister on the team. “I feel like I have someone who will always be there for me.”