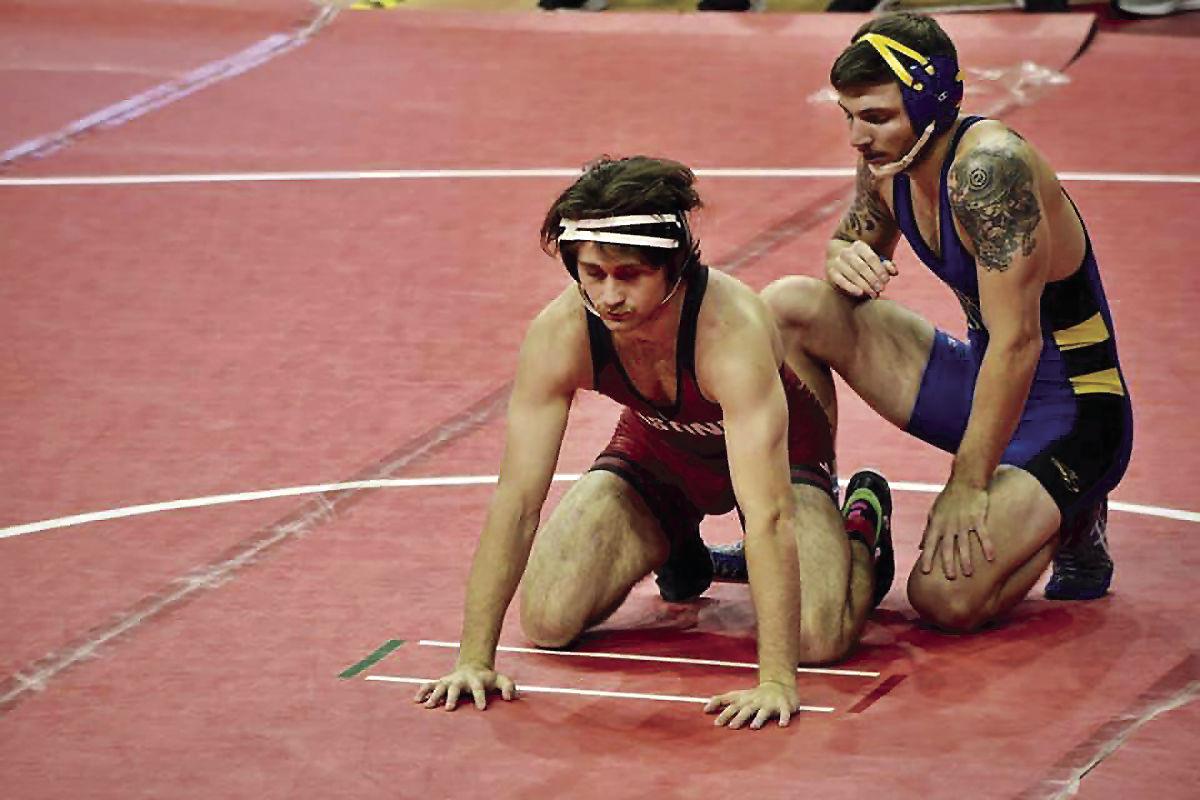 Jayden Miller, in red, is a junior at Hastings College where he is an Exercise Science Major. 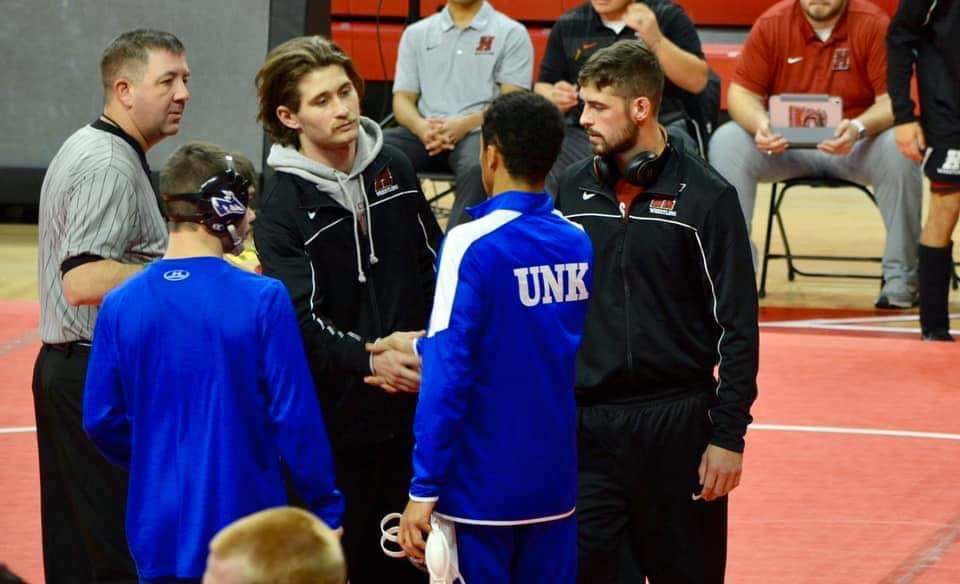 Jayden Miller, left, shakes hands with an opponent from the University of Nebraska Kearney 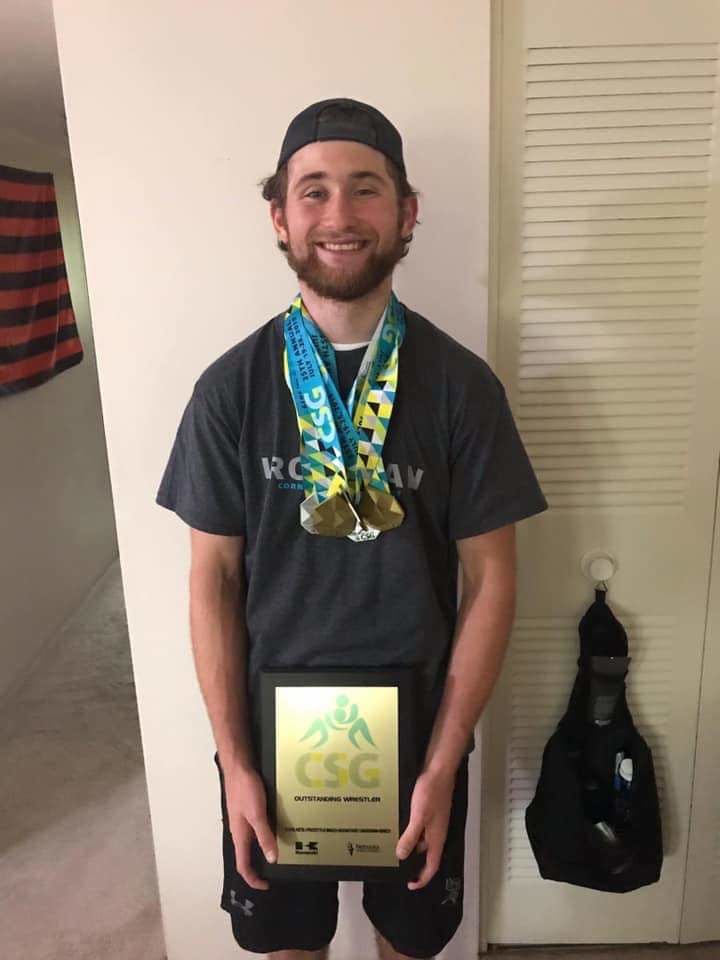 Jayden Miller shows off his swag and awards after the 2019 Cornhusker State Games.

Jayden Miller, in red, is a junior at Hastings College where he is an Exercise Science Major.

Jayden Miller, left, shakes hands with an opponent from the University of Nebraska Kearney

Jayden Miller shows off his swag and awards after the 2019 Cornhusker State Games.

For some people, doing what is needed to be done to get through is all that matters.

For others, going the extra mile is what they do because it’s what is right.

Jayden Miller is a 2017 graduate of Gothenburg High School and the son of Travis and Heather Miller.

Now a junior at Hastings College, Jayden is in the middle of wrestling season and hip-deep in studies to become a physical education teacher.

Having parents heavily involved in public service has given him a front-row seat to people helping others.

Heather said that foundation has played well into Jayden’s wish to become a teacher and coach once his career at Hastings College is through.

“Throughout high school, Jayden saw the wrestling family pull together and just get things done,” she said.

Jayden said he could not have asked for a better start to his wrestling career, which began when he was 5-years old.

“The wrestling program at Gothenburg High School was a good starting point. It taught me what I need to know,” Jayden said.

Humility, patience, perseverance and humanity are just a few of the things that Jayden exemplifies in his life both on and off the wrestling mat.

Heather said the evolution of her son as a wrestler is wonderful, but it pales in comparison to how he has grown personally.

“The maturity I have seen in him in just the last year is unreal,” she said. “He has a teammate that can’t be at practices Tuesdays and Thursdays so Jayden goes to the regular practice, then comes back and goes through the practice again with Carter.”

Broncos head wrestling coach Tyson Springer said Jayden will do anything for the team and sacrifices a lot to do so.

“Jayden is what you call the ultimate team player,” said Springer. “Jayden took it upon himself to take over our younger group of wrestlers and this fall they have had a smooth transition from high school to college.”

Ultimately, Heather said Jayden’s care for his teammate is molding him into the teacher and coach he hopes to become by building relationships he can foster beyond his experience in competition.

Heather said the foundation that Jayden built at GHS has helped him become who he is today, and laid the groundwork for connections he will take with him throughout his life.

“I have seen Jayden wrestle against Olympians like Jordan Burroughs,” she said. “The coaches always welcome him back into the fold and they have given him opportunities that have helped him succeed on the mat but also in life.”

Jayden said his high school coaches have helped him into his career at Hastings College and when it came time to start thinking about college he had the experience of his coaches to help him through that big decision.

“They were a big help in my picking the right college, from reaching out and talking to coaches they knew at the college level to my having conversations with those coaches to make the right choice,” he said.

Although the coach that recruited him to Hastings College has left, Jayden felt it was still the right place for him.

“I met the new coach and I got along with him really well,” he said. “I met my teammates, they’re phenomenal, and I just felt like it was the right place for me.”

Coach Springer said Jayden has grown into an outspoken leader and team captain, and his presence on the team makes them better.

“We have lacked some depth in the upper weights and Jayden is always the first one with a huge smile to say, ‘put me at any weight,’ and isn’t scared to wrestle anyone,” said Springer. “Jayden is our starting 184-pound wrestler but barely walks around at 170-pounds.”

His willingness to do what is best for the team is something that makes him a better wrestler, but his commitments outside of wrestling truly round him out as a person.

Jayden was voted to the 2019 Hastings College Homecoming Court and is a resident advisor at Bronc Hall, a job Springer said he has embraced. The resources available to him on campus have allowed Jayden to take full advantage of all Hastings College has available.

“The academic side of things at Hastings College is a big deal,” he said. “I felt it was a good choice.”

With so much conversation swirling in the college athletics atmosphere about student-athletes being paid throughout their time of participation, Jayden said when you look at the big picture, the no-fail mentality of Hastings College made it a moot point.

“We are on scholarship, so we get paid a lot to be here and when you pair that with academic scholarships, it’s really not an issue,” he said “There are so many people around to help you manage your time, there are free tutors to help you with classes, there are endless options for us.”

Heather said that the academic emphasis at Hastings College has helped Jayden shrug the idea that it is taboo to ask for and receive help.

“Hastings College has made Jayden realize that it’s okay to ask for what he needs,” she said. “It’s made him feel comfortable with finding what he needs to learn.”

That is something Jayden hopes to take to a community like Gothenburg upon his graduation in 2021.

“Ultimately my goal is to focus less on what the kids do in athletics and turn them into successful adults,” he said.

Heather says that mindset goes back to Jayden’s roots. “The coaches at GHS want to see the wrestlers do well in the program,” she said. “They lay the groundwork for these wrestlers to be successful adults.”

For now, Jayden is focusing on being the best wrestler and student he can be. The best part of being a college wrestler, Jayden said, is the atmosphere and the people he spends most of his time with -- his team.

“I love being around my teammates, they are phenomenal people, and the coaches are great to be around. I wouldn’t be close to where I am without them.”