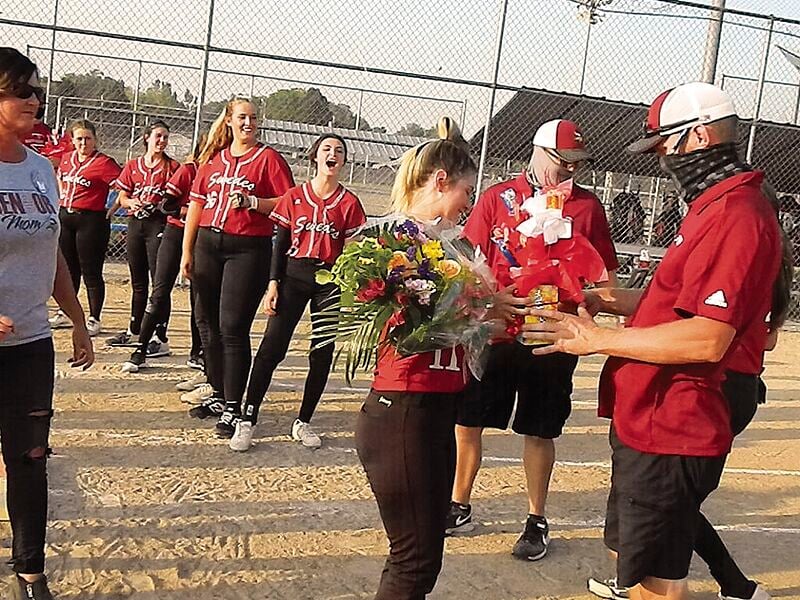 The Swede softball team hosted Centura-Central Valley Sept. 24 and honored their seniors before the game - and with a win! 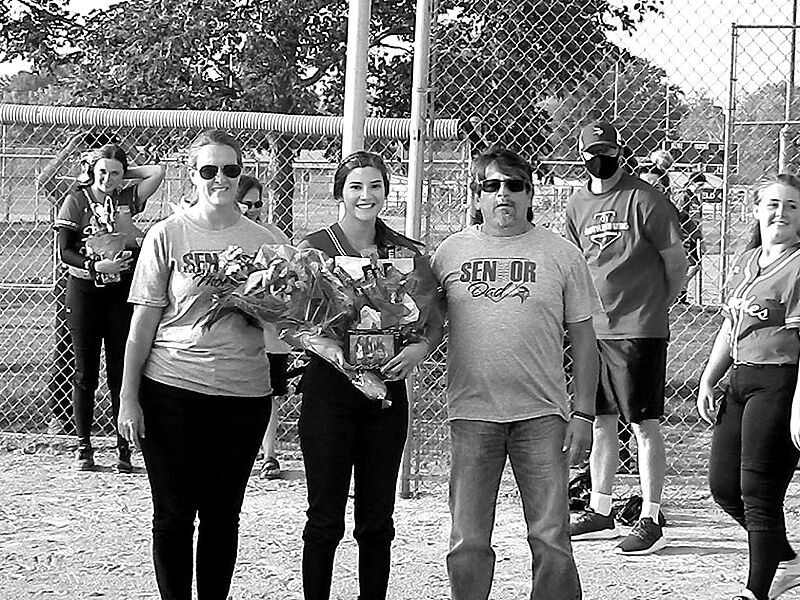 Kyndyll Alvarez walks with her parents during the Senior night ceremonies. 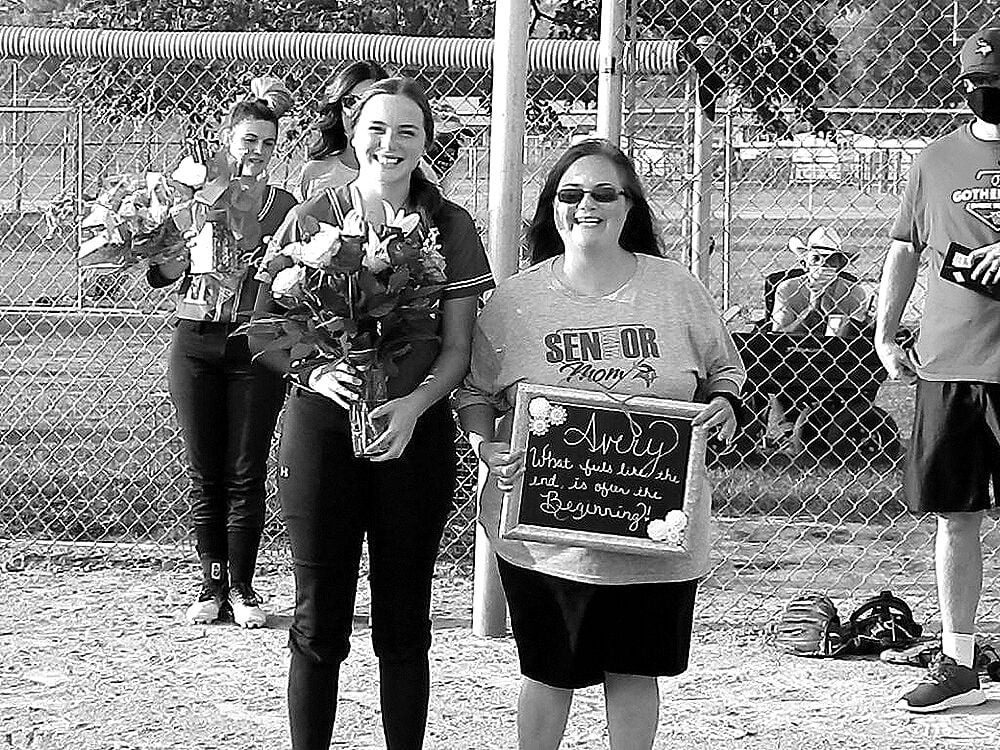 Avery Dunphy pauses with her mom on Senior Night. 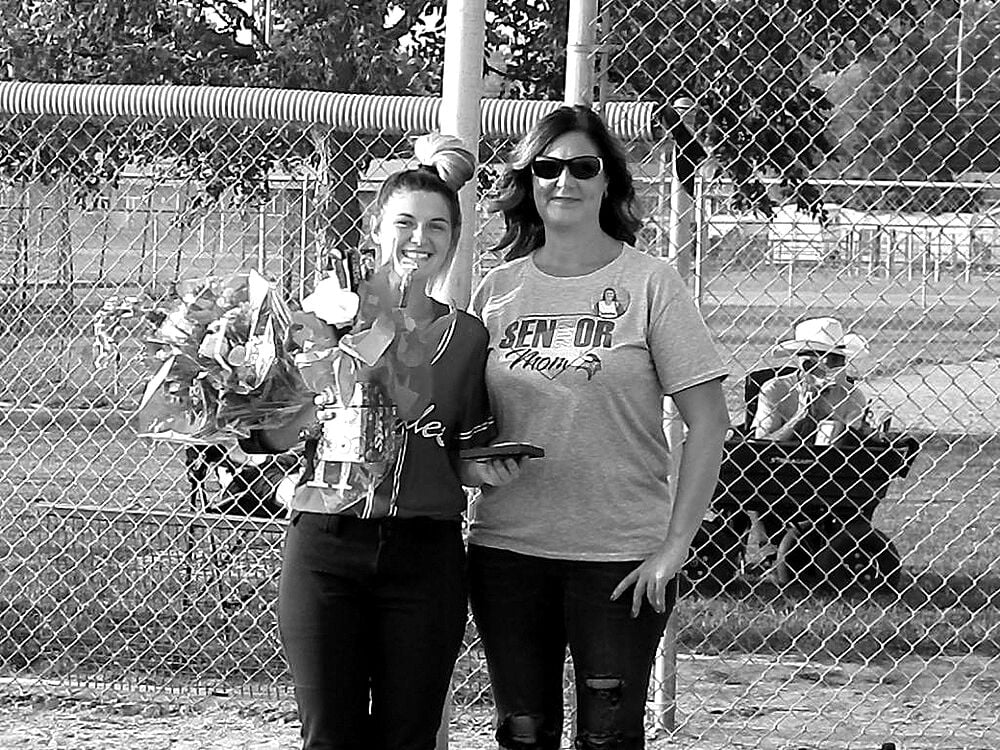 Kylie McManus is honored with her mom on Sept. 21, Senior night for the Swede softball team. 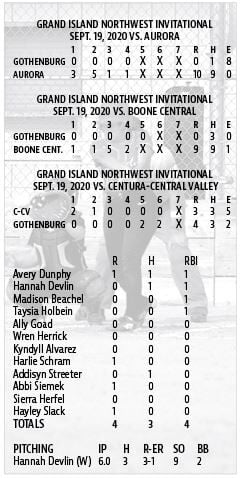 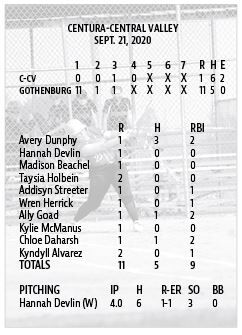 The Swede softball team hosted Centura-Central Valley Sept. 24 and honored their seniors before the game - and with a win!

Kyndyll Alvarez walks with her parents during the Senior night ceremonies.

Avery Dunphy pauses with her mom on Senior Night.

Kylie McManus is honored with her mom on Sept. 21, Senior night for the Swede softball team.

It was parents night and the Gothenburg Swede softball team honored their Seniors with a big win against Centura-Central Valley.

The Swedes made quick work of C-CV in the top of the first, booking a 1-2-3 start to the game.

In the bottom half of that inning, the Gothenburg bats heated up, plating nine runs to jump out to a big lead.

“We started off with several good defensive plays in the top of the first and then we took good disciplined at-bats in the bottom of the first that led to multiple runs,” coach Luke Dea said.

Taysia Holbein grounded into a fielder’s choice where Devlin was tagged out advancing to home.

With the bases still loaded, Addisyn Streeter drew a walk, bringing the first run across the plate.

On the next at-bat, Kyndyll Alvarez smoked a ground ball that was too hard to handle by the C-CV first basemen, scoring Goad.

The wheel kept turning when Dunphy came back to the plate and singled on a hard ground ball to center field, scoring Daharsh.

After a pitching change, Alvarez and Dunphy scored on a passed ball.

The inning ended after Devlin struck out and Beachel flew out to the pitcher.

Another 1-2-3 inning defensively for the Swedes brought them to the bottom of the second inning and Gothenburg kept pouring it on.

Holbein drew a walk and Herrick reached on a second error by the first baseman, then took second on the play.

Goad hit a hard ground ball, but scored Holbein on the out, bringing the score to 10-0 in favor of the Swedes.

CC-V got on the board in the top of the third inning on a single, followed by a double that scored the run.

That would mark the only C-CV run of the game.

Gothenburg got the run back in the bottom of the third when Alvarez drew a walk and Dunphy hit a hard drive to center field.

Alvarez scored on the play.

The Swedes made quick work of C-CV in the top of the fourth inning, turning a double play and recording a strikeout to end the game.

“My favorite part is that after the fast start, we kept our focus and didn’t have any let-downs,” Dea said. “From start to finish, we played a solid game, both offensively and defensively.”

Devlin was strong in the pitchers’ circle for the Swedes, only allowing one run on six hits in four innings of work and striking out three.

“We are playing a lot of games during this week and a half stretch,” Dea said. “I personally like it. We are at the point in the season where everyone is a little sick of practicing so playing games day after day after day is, I think, okay with the girls too.”

The Swedes traveled to Grand Island Sept. 19 to compete in the GINW Invitational Tournament and ended the weekend with a walk-off win against Centura-Central Valley after losing the first two games.

“No doubt we needed to end Saturday the way we did,” coach Dea said. “We hadn’t scored a run all day so finishing with a walk-off win was a morale booster for sure.”

Gothenburg dropped the first game against Aurora 10-0 and fell to Boone Central 9-0 before meeting Centura-Central Valley.

C-CV got on the board early, scoring two runs in the first inning and one in the second.

The fifth inning saw the Swede bats come alive when Streeter slapped a ground ball and reached first base on an error.

Sierra Herfel was hit by a pitch, and Dunphy loaded the bases with a line drive to left field.

Devlin grounded into a fielder’s choice, resulting in Streeter being forced out at home, but on the next at-bat, Beachel reached first on an error by the C-CV catcher, scoring Slack and getting the Swedes on the board.

Holbein flew out to right field, and Devlin scored after tagging up, leaving the score at 3-2 going into the sixth.

Gothenburg was quick to end any hopes of C-CV answering in the top of the sixth inning and got back to work in the bottom half.

Alvarez reached first on an error by the third baseman and Streeter singled on a high fly-ball to right field.

Herfel was hit by another pitch, loading the bases.

Dunphy grounded into a fielder’s choice, scoring a run to tie the game.

The winning run was scored when Devlin sliced a long fly ball to center field, bringing home a 4-3 win for the Swedes in dramatic style.