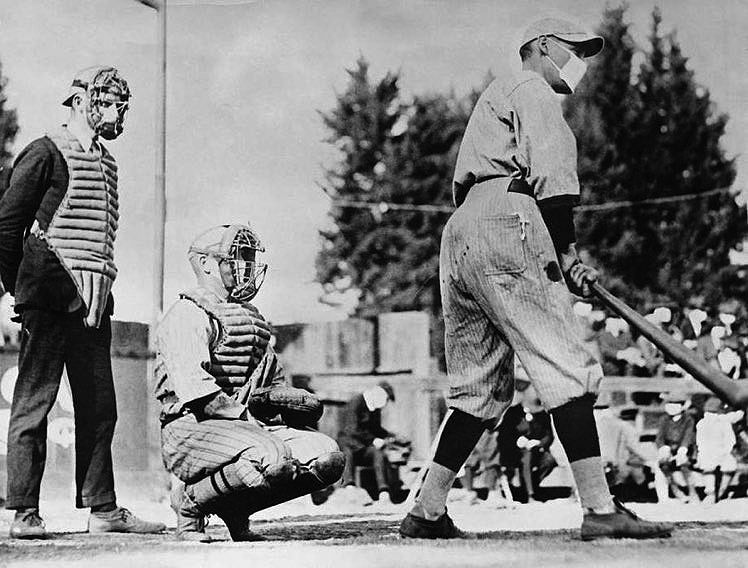 Gothenburg High School had a baseball team that played one game in the history of the program in 1919.  The photo above represents what it was like for athletes during the Spanish Flu pandemic during that time. If you look closely, you can see masks over the spectators faces. 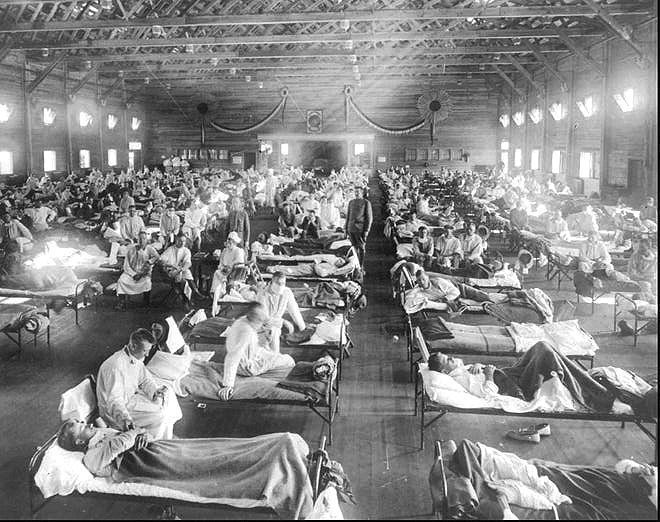 The above photo shows military personnel who fell ill during the Spanish Flu pandemic in 1919.

Gothenburg High School had a baseball team that played one game in the history of the program in 1919.  The photo above represents what it was like for athletes during the Spanish Flu pandemic during that time. If you look closely, you can see masks over the spectators faces.

The above photo shows military personnel who fell ill during the Spanish Flu pandemic in 1919.

Not to make light of the current pandemic sweeping the United States and the World but glance back at our brief history as a country and the larger picture of the world as a whole will tell you that this sort of thing is deeply embedded in the history of man.

We’ve learned how to ride it out by listening to the medical experts who give us the simple rules to limit the spread of the Coronavirus (and before you ask--no it is not named after a Mexican beer).

This is not the first time that Gothenburg has seen a suspension in activities and been encouraged to be socially distant.

America was drawn into the war in 1917 (called “The War to End All Wars”) and there were 378,000 in the armed services. Several training camps were quickly set up in March of 1918. Some 100 soldiers at Camp Funston in Fort Riley, Kansas became ill with the flu.

In a week the number quintupled. At the same time, flu activity spread unevenly through the United States, Europe and Asia over the next six months. All told, the pandemic infected 500 million people worldwide. The death toll was in the millions, with 675,000 Americans falling victim to the illness.

Governments, including America, hoping to avert a panic, minimized the actual number of those afflicted from the public. Other countries around the world, also thinking that the public would panic if they knew the truth, did the same but somehow Spain was mostly spared the flu bug and published the staggering world numbers regularly. Seeing reports only coming out of Spain, the public assumed the flu must have started there and thus came the name, “Spanish Flu.”

The bug reached Gothenburg in the latter part of 1918, and by the turn of the year city officials had canceled public meetings and school was closed. In fact, the football season was canceled the night before the opening game.

Omaha Health Commissioner, Dr. E. T. Manning, issued a public health order closing churches, schools, movie houses and other places of congregation in Omaha. The order came after a new outbreak of influenza. He “hoped the closure order would limit the availability for the pubic to intermingle and speed the disease.” Orders included refraining from using common drinking cups or kissing (Now wait a minute!). Theater owners were enraged. The Brandise Theatre expected to lose $2,400 on an upcoming performance.

For some reason the Nebraska Board of Health lifted the closure order on Nov. 1, 1918, Nebraskans were thrilled but almost immediately new flu cases and deaths spiked. Reluctant and embarrassed to reissue a ban on activities, the Board of Health only distributed leaflets with the phrase, “Cover your mouth when you sneeze, if you don’t you will spread the disease.”

Steven Davis of Meridian, Idaho, noted in his book “Dear Folks” about letters received from his grandfather, Earl Young, during military training and his participation in France during World War I. Here are some excerpts:

A doctor in Omaha prescribed a concoction called “Special Pink”, telling his patients it would cure the flu, or cold, or grippe (at $17.00 per bottle). If it didn’t work, he said that they hadn’t taken it soon enough or long enough, warning them it would be fatal if they stopped taking it. And of course, he would happily see to it that they had ample supplies of the drug and that he was the only one who had it available.

He noted that his banker took it three times a day: with a brandy chaser in the morning, at lunch with a quaff of stout and after supper with two shots of whiskey.

In Gothenburg, the epidemic roared on.

Only 34 hardy souls came out to vote and at one time there were 13 patients in the Red Cross Hospital and 34 in the Pease Hospital. Gothenburg was suffering five deaths a week and 15 nurses were hired from Denver, Omaha, Lincoln and Grand Island to handle the large number of those afflicted. The threat abated somewhat in May and commencement was finally held on June 13.

The track season was canceled (only two basketball games had been played, both in the state tournament). Gothenburg accepted a forfeit from Kearney but lost to Fremont, who finished second in the state.

Before everything was shut down, the Swedes played the only GHS baseball game recorded by either paper. Games had been mentioned in earlier years and in 1916 the players voted to play baseball instead of running track.

Nation-wide the pandemic killed an estimated 195,000 Americans in October alone. Philadelphia was hard hit with deaths so constant they had to use packing crates to bury them. Chicago, San Francisco and New York were also hard hit.

In September, a second wave of the flu hit an army training camp and a naval facility in Boston. In December stores and factories were asked to stagger opening and closing times to prevent overcrowding in public transportation. And in January a third wave hit many cities.

At the end of World War I, at the Versailles Peace Conference, American President Woodrow Wilson spearheaded a humanitarian peace settlement for Germany and was on the cusp of convincing the world leaders to form a League of Nations to avert wars between them.

He collapsed and historians speculate he was weak from the flu. Then during a lengthy stay in a hospital, France and Britain saddled Germany with impossible reparations, sending the country into a deep recession that gave birth to a little man with a wispy mustache by the name of Adolph Hitler and the rest is history.

The most mortal disease in history was the Black Death which swept across Europe 1346-1353. It was transmitted from rodents to humans and wiped out some 60% of the population of England, Ireland, France, Germany, Italy, Egypt, Russia and all smaller countries.

Commerce was mainly by ship from county to country. When you have ships, you have rats. These rats distributed the Bubonic Plague that killed at least 50 million people.

It was most prevalent in the summer. When spring rolled around, the English Royalty moved out of the cities, particularly London, to the countryside, thus allowing those unable to escape to take the full brunt of the pandemic.

At the time the Black Death was assumed as God’s punishment of mankind for their sinful ways and many lashed their back with a whip in penance. Even when the Pope condemned their actions, they continued.

In England a small poem took root. No one knows when or who came up with it but later children used it for play, never suspecting where or why it originated.

Innocent enough but it pertained originally to the plague. Here’s why:

Many thought that carrying flowers warded off the disease

Many of the dead were cremated, thus the ashes

And no one survived, thus they all fell down

The nation was not prepared for a pandemic of this kind either in equipment (ventilators, masks, hospital beds) or personnel. At the time this was written the number afflicted doubles every three days.

Experts tell us that it will get worse before it gets better. But many, many lives can be saved if we just follow the simple guidelines of a large number of medical experts that know much more than we do. We’ve survived this sort of thing before and we will survive this one.