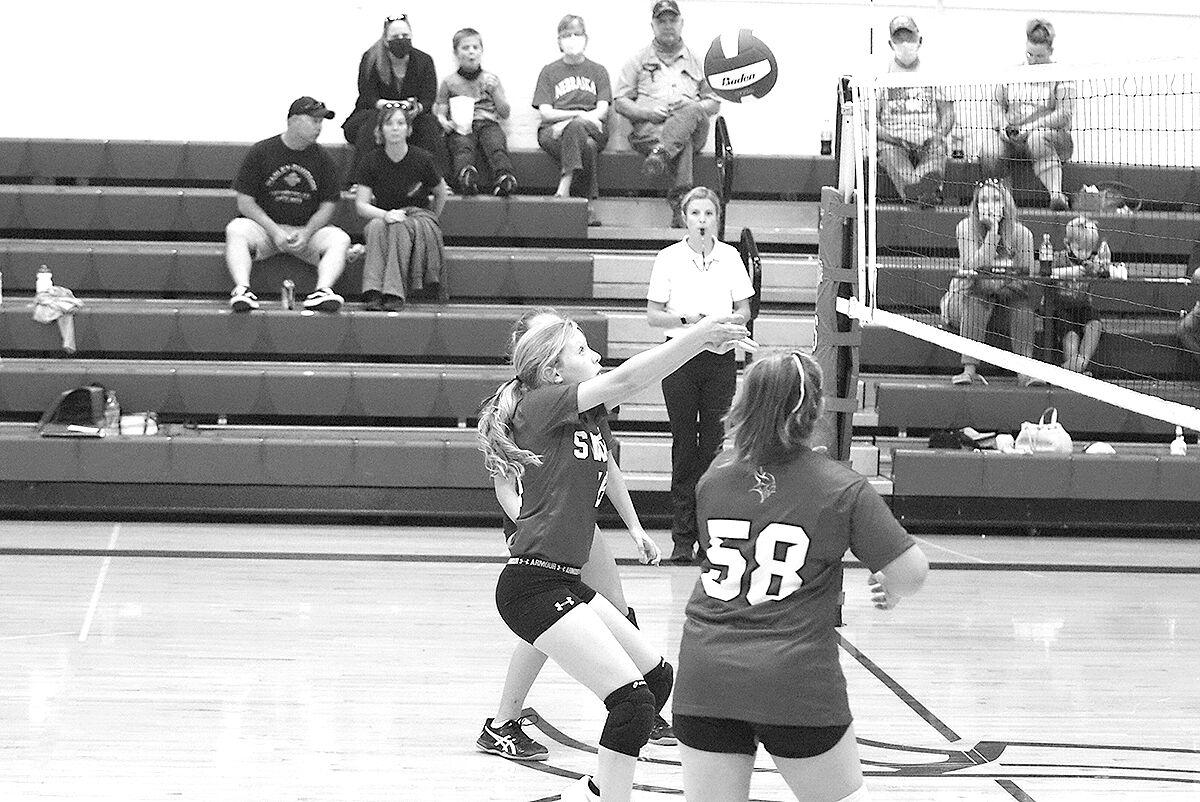 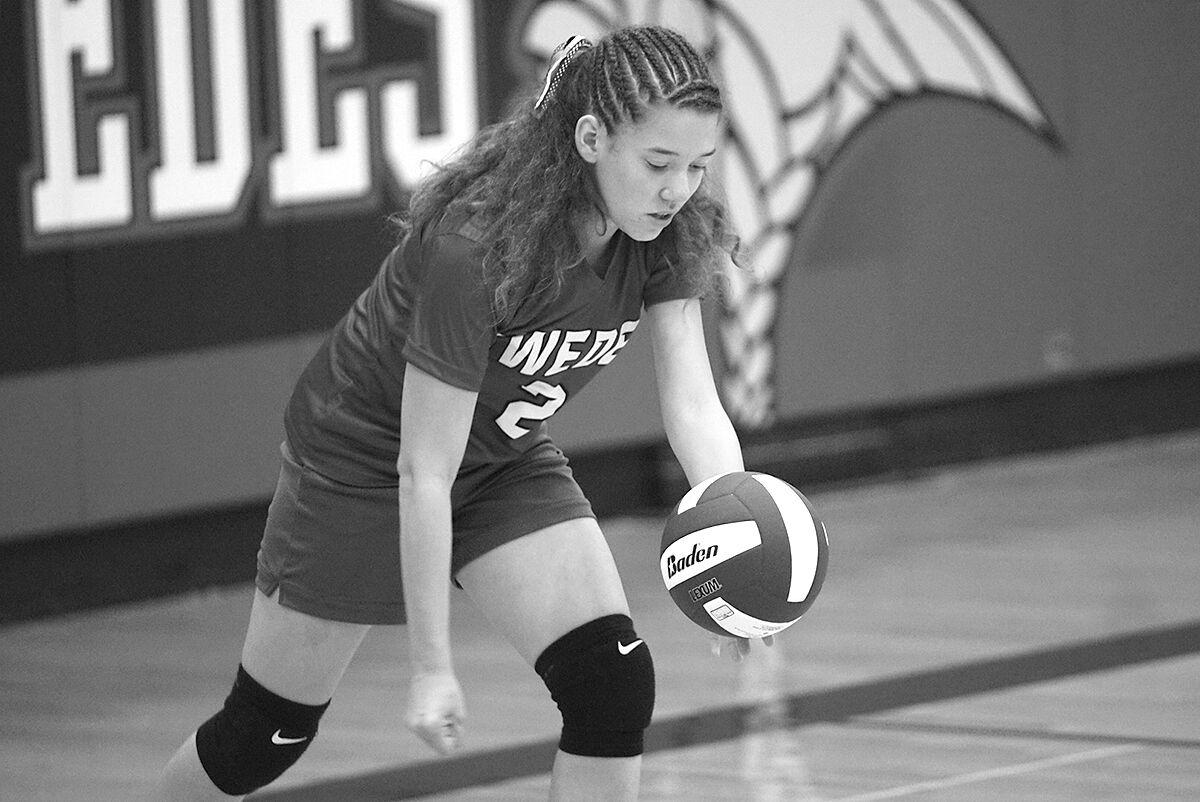 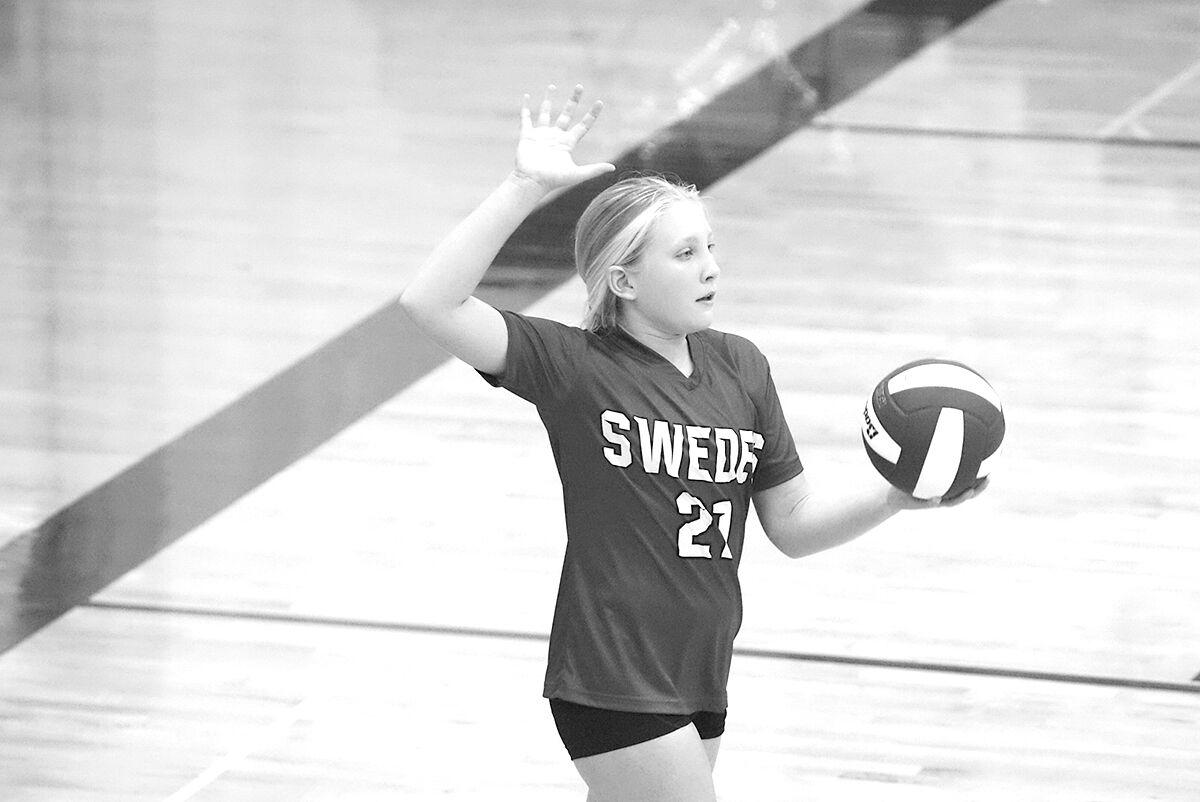 Gothenburg’s eighth-grade volleyball teams hosted Cozad Oct. 5, and all three teams came away with a win.

In the A match, coach Mary Clark said Taryn O’Hare was superb in her hitting, digging and serving. She had nine service points, five of which were aces.

“Taryn has such a high volleyball IQ,” Clark said. “She understands where to put the ball in most situations and is a very consistent player.”

Joey Holland also had nine service points, five of which were aces. Clark said Holland continues to do a great job setting, passing digging and serving.

“Olivia Koubek had her best game to date, with many kills, great digs and five points at the service line, two of which were aces,” Clark said.

Leading the way was Brianna Houchin with 14 points, 12 of which were aces.

“Bri has a wicked serve that most opponents find hard to handle,” CLark said. “She has been a force all year at the service line.”

Adi Bartels had five points with two aces, Avery Salomon had four points with an ace, Taylor Burge and Kinley McCoy each had two points and Jacie Naprestek added one point.

Clark said the team played very well as a unit.

“We let up after the first set,” Clark said. “Some mental mistakes and lack of communication in that second set forced a loss. I was proud of the way they came back in the third set and dominated.”

In their Oct. 8 match against Hershey, the Swedes fought hard but lost two of the three games they played.

“Hershey was an excellent opponent,” Clark said of the A team’s 18-25, 22-25 loss. “They were strong servers and solid in every facet of the game. Although the girls lost, I was very pleased with their play as two of our starters were gone. We played at a much higher level because overall, we were equally matched.”

Clark went on to say that service errors made the difference as the Swedes sacrificed too many points on missed serves.

Madi Cornwell had six points in the match, and Clark said that she did an excellent job in all aspects of the game.

Taryn O’Hare was the leading server with 10 points, five of which were aces.

“Whitney Cottingham had her best game at the net,” Clark said. “She had several kills and two crucial kill blocks.”

Olivia Williams had six service points, Kalli Strauser and Adi Bartels each had two points and Kinley McCoy had one point.

Clark said that Taylor Burge, Adi Bartels and Kinley McCoy really did a nice job stepping in to help with vacancies left by starters.

“This team fought hard from start to finish and really played well overall,” Clark said. “Hershey’s B team was very solid, too, so the competition was great for our girls.”

Brianna Houchin was the leading server with 11 points, five of which were aces.

Whitney Cottingham had six points with two aces. Avery Salomon had four points and Kinley McCoy and Adi Bartels had two points each.

“The team as a whole played well,” Clark said. “They were scrappy and left it all out on the court. I am proud of their effort. “

Abbi Bassett and Taylor Littlewolf each had four points, Avery Salomon and Brianna Houchin had three points, Issie Jewett had two points and Madi Bryant had one.

The eighth-grade team takes on Ogallala at GHS on Oct. 19 beginning at 4 p.m.

“Our A team has really come together working as a cohesive unit and finding ways to score points,” Rubentaler said. “Lindly Anderson, who recently moved to an outside position, took several solid swings from that spot, putting the ball to the floor at key moments.”

She went on to detail the standout players for the B team as well.

“Hannah Brown was a key player on the floor for the first set of B,” Rubenthaler said. “She showed consistent passing and great court awareness. She was assisted by Peyton Peterson, who seemed to be all over the court throughout the game.”

The C team participated in an intramural scrimmage that same evening, and Rubenthaler said she was proud of the way the entire C squad continues to improve on fundamentals and are gaining comfortability running their offence.

“Kinley Oberg led her team with her communication and solid passing attempts,” she said.

The seventh-grade teams hit the court again Oct. 12 when they traveled to Broken Bow to take on the Indians A and B teams.

“Our A team started off strong with a 13-point serving streak for setter Peyton Hilbers,” Rubenthaler said. “Outside hitter, Ellie Wyatt found the line several times in key situations. Right side hitter Halsey Thomalla was the difference-maker in the third set, finding a way to score for her team.”

“Rileigh McClay continues to be a difference-maker on the court,” Rubethaler said. “Her composure and aggressive net play leads her team. Kaitlyn Hecox has been an off-bench asset, remaining flexible, available and able to play in all positions.”

The seventh grade volleyball team is back in action Oct. 19 when they host Ogallala at GHS. The first serve of the match will be at 4 p.m.