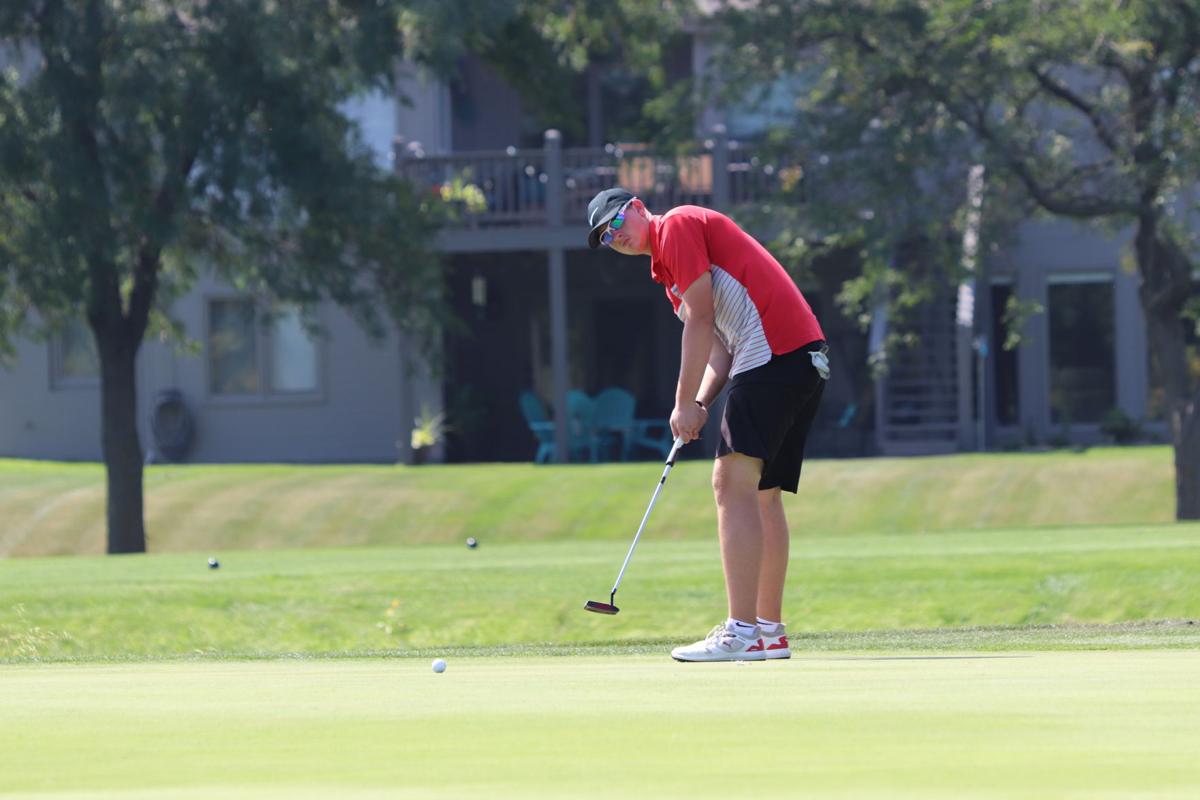 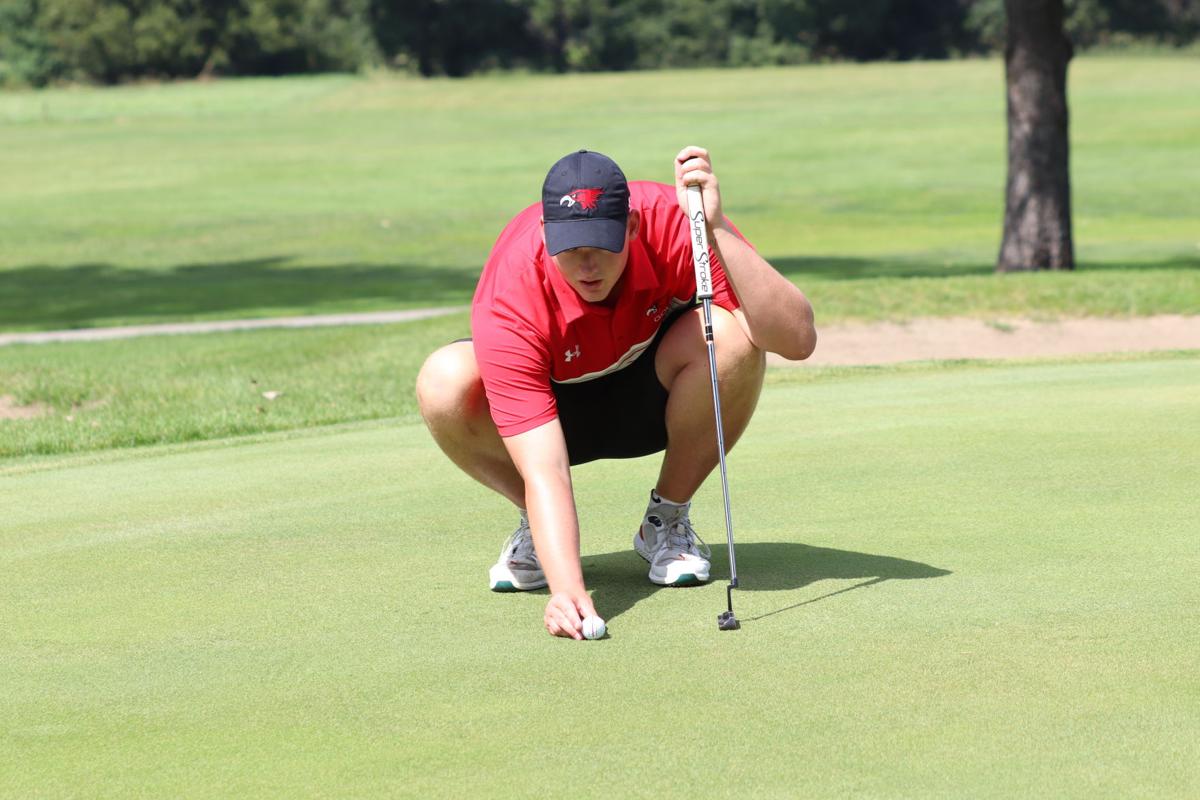 When a high school golfer is put in the same category as Ernie Els, a guy sits up and pays attention.

Grant is a 2018 graduate of Gothenburg High School and was offered a scholarship to play junior college golf at NCC in Norfolk.

That sounds like a pretty run of the mill scenario for many high school seniors, but Grant’s path to college golf was a little less than traditional.

“I played golf a little bit when I was growing up, but I really loved basketball,” he said. “I played on travel basketball teams starting in fifth grade and my dad was one of my coaches. In the summer before my senior year, I was playing on a select team in Council Bluffs, Iowa, and I tore my ACL in my knee.”

Grant said after surgery to repair his knee, he worked hard to get back to playing again since it was his senior year of basketball.

In January of his senior season, he achieved his goal.

“In my third game back I was just starting to play well again,” he said. “I hit three-three pointers in the first half of the game and felt really good and had 15 points at halftime.”

Grant had caught his stride again.

Until the other shoe fell.

“In the second half, I tore the ACL in my other knee and had to go through the whole process again,” Grant said.

While basketball was his first love, it wasn’t the only sport in which Grant participated.

He played golf throughout his high school career, as well, and he said that while he had some high finishes, he didn’t really work at the sport.

But that was about to change.

“I was devastated,” Grant said of the second knee injury. “That was when I decided to play golf in college.”

Golf wasn’t a foreign game to Grant by a long shot.

And while he didn’t play in a formal tournament until he was a freshman in high school, Grant’s dad, Matt Sell, who golfed for Kearney State College, was impressed with his talent for the game.

“Starting when he was three-years-old, he would go to the course with me and whack it around,” Matt said. “I could tell from an early age that he had very good hand/eye coordination and a fluid, natural swing. I made sure he had good fundamentals - grip and setup.”

Matt said that his efforts to encourage Grant to split his time between basketball and golf were not fruitful, and supported his decision to focus on basketball.

But there was always a thought in the back of his head.

“I tried to encourage him to go to the course because I thought he had the ability but he just wasn’t interested in doing that at that time,” Matt said. “In high school, he would play during the spring golf season but only went to the course a couple of times in the summer. I always thought he could be good enough to play in college -- if he would work on his game.”

That opportunity came for Grant when he told his dad about his college plans.

There was just one piece of the puzzle that didn’t quite fit the grid.

Grant didn’t swing a golf club during his entire senior golf season due to rehabbing that second knee injury.

I remember thinking that would be a tall order,” Matt said.

Grant said he talked with GHS boys’ golf coach Dan Scherer about his college plans, and he took it from there.

Scherer said speaking to coaches about Grant’s game wasn’t a difficult thing, considering how much of a natural golfer he is.

Getting a coach to give him a shot without seeing him swing was another story.

“I started making phone calls and telling coaches about what a great kid Grant was, which was the easy part,” Scherer said. “I got the coach from NCC in Norfolk on the line and he had a guy back out of a scholarship, so I asked him to just talk to Grant to see if he’d fit into the program there.”

NCC Coach Pytleski said because of his inability to play, he was probably overlooked by other college golf coaches.

That didn’t stop the NCC coach from giving Grant a chance.

“After talking to Grant’s coach, I had him fill out a player profile form with his contact information and we set up a visit,” he said. “We met and talked a little, I showed him our facilities, and then I had kind of a tough decision to make.

“I have never offered one of my players a scholarship without seeing him hit, but I liked Grant, trusted what his high school coach told me about him and I took a chance and offered him a scholarship to play for Northeast Community College,” Pytleski said.

A chance taken by a junior college coach turned in to the chance of a lifetime for Grant.

Grant signed a letter of intent Jan. 28 to play golf at Chicago State University, a Division 1 program with a coach that saw a lot of himself in Grant.

“I have a soft spot for athletes that have overcome injury and accepted the challenge to keep moving forward in a positive direction,” said Chicago State University men’s head golf coach Mark Haines. “As a college basketball player, I recovered from two major injuries my sophomore and junior year and returned for my final two years to compete and succeed.”

Haines said he became aware of Grant’s talent on the links through a recruiting site.

Before he had a chance to reach out to him, Grant personally contacted the coach to discuss his next steps.

After speaking to Grant and learning of his story to find success after injury, Haines said the choice to make him a part of his team was simple.

“What I like about Grant is his upside potential,” Haines said. “I love the fact that he rehabbed one knee after major injury, recovers and blows out another knee and chose not to give up on his athletic talent and poured it into golf.”

Matt said that he was skeptical when Grant told him he wanted to play D-1 golf.

“I didn’t think the goal was attainable, but he proved me wrong - again. He continues to surprise us, and that has been fun,” he said.

Grant said that as he looks forward to golfing at Chicago State, he plans to make the most of his last season at NCC.

“I am hitting the ball better than I have in my life, and I am really looking forward to getting rolling this spring,” he said. “I hope to qualify for the JUCO (Junior College) National Championships in May.”

Haines said that Grant’s determination is something that will do nothing but help him as he makes the jump from junior college to division-one competition.

“He is extremely athletic and according to coach (Pytleski), an extremely hard worker,” Haines said. “He’s the last to leave the range, and his scores went from low 80’s to 70’s last year. I believe he will continue to improve and become a very solid D1 golfer.”

Grant’s hard work and dedication have not just led to lower scores, he’s sitting at No. 127 on the Golfstat.com list of the top 150 junior college golfers in the country.

Through the injuries and the goals and the dreams, Matt said that the best part of the whole process was seeing how Grant has handled the challenges that would typically sideline an athlete.

Beyond that, he’s proud of how Grant has grown into his own.

“I have seen a change in him as a person,” Matt said. “He has really grown up since he moved away for college. He is very serious about his classes which is a big change from high school.”

Grant said his dad had a big impact on his golf game, and as he continues to grow and learn in the sport, his dad is someone he leans on for advice.

“He has taught me a lot about the golf swing,” Grant said. “He is big on doing the fundamentals correctly. He has taught me that golf is a game of how bad your misses are. We all hit bad shots but if my bad shot isn’t out of play or cost me a penalty shot, that is the key to scoring well.”

Matt said that giving Grant pointers on the course is something that started before he left for college and continues now as he prepares for the next step in his golf career.

“I spent many hours on the range with him the summer before he went to Norfolk working on his swing, short game and putting,” Matt said. “Even today he sends me videos of his swing and asks me for suggestions.”

And Grant said that those suggestions will come in handy as he hits the tough courses on the college tour circuit.

“The tees are all the way back and the pins are tucked into corners of the greens,” Grant said. “Blue Top Ridge Golf Club in Iowa is one of the most challenging I’ve played so far. I hope to play well again at this course in the spring so I can make Nationals.”

Many lessons have been learned through this time in Grant’s life, and he said while he’s overcome a lot to get to where he is, hard work is the key to his success.

“I have learned to set goals and do whatever it takes to reach them.”

Matt said that watching Grant grow and evolve as a person and a golfer has solidified his belief that when one door closes, another one will open.

“In life, we have a plan in place and sometimes things don’t work out the way we envision,” he said.

Through it all, Grant holds a special place in his heart for the place that helped mold his golf game.

“My favorite course to this day is still Wild Horse in Gothenburg.”

"I didn’t think the goal was attainable, but he proved me wrong - again. He continues to surprise us, and that has been fun. "