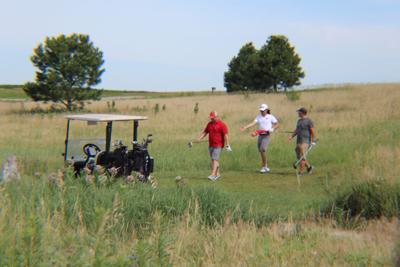 Every year in July, Husker legends from years and teams past gather to pay tribute to a man who felt strongly for a cause.

In 2001, Adrian Fiala, the trusted voice of the Huskers, started a fundraiser to benefit the TeamMates Mentoring Program and called it the Adrian Fiala Husker Heritage Golf Tournament.

The event was an opportunity for Huskers to come together and play a round with local golfers with proceeds benefitting the TeamMates Program.

After his passing in 2014, the tournament was renamed the Adrian Fiala Memorial Golf Tournament and Adrian’s good friend Dave Morock has taken the helm of organizing the event.

This year is the 20th year of the Adrian Faila Memorial Golf Tournament.

It will be July 18 at Wild Horse Golf Club.

Lynnette Stevens is the Gothenburg TeamMates Coordinator and said things will look just a little different this year.

Due to COVID-19, the gathering and auction the evening before the tournament will be held outside with some player participation opportunities.

“From 6 - 8:30 p.m. July 17, there will be a grilled steak sandwich meal provided for all corporate sponsors and members of the 19 teams that are playing in the tournament,” she said. “There will also be a putting challenge, a par-3 shootout on the ninth hole and cornhole games will be available for participants.”

Stevens said there would also be a raffle and a silent auction for a football autographed by the three Husker Heisman Trophy winners and a framed print of Memorial Stadium.

The Friday night event will also hold a special guest as Coach Tom Osborne will be attending.

Stevens said there would be 19 teams of four golfers participating in the tournament.

“Two Husker athletes join each team so there’s around 115 players on the course for the tournament,” she said. “Former and present Husker athletes from football, baseball, volleyball and golf participate.”

Stevens said that getting the Huskers to Gothenburg is not a difficult endeavor as many of the Husker Legends who come for the event have golfed every year in the tournament.

“They know it’s the third weekend in July and they call to play,” she said. “Others are contacted by former Swede and Husker football player, Monte Kratzenstein, Luke Rickertsen and Dave Morock.”

She went on to say there would be about 38 Huskers attending this year’s tournament, including Steve Taylor, Jim Rose, Mandy Monson, Brandon Riley, Aaron Davis and Jared Crick.

An event like this isn’t possible without the help of some tremendous sponsors, and Stevens said this year there were six local businesses that have contributed to making the two-day event a success.

“Flatwater Bank, First State Bank, The Home Agency, LandMark Implement, Ward Laboratories and Nebraska Salt and Grain have partnered with us on a large scale,” she said. “In addition, we have 27 generous businesses and individuals who have donated money for hole sponsorships and flag prizes.”

Stevens said that the Adrian Fiala Memorial Golf Tournament is the biggest fundraiser for the local chapter of TeamMates.

“With Adrian’s name connected to the tournament and his following of Huskers, we are able to sponsor many activities and events for our TeamMates mentors and mentees throughout the school year,” she said.

Started in 1991 by Dr. Tom Osborne and his wife Nancy, the TeamMates Mentoring Program was launched with 22 University of Nebraska-Lincoln football players and 22 Lincoln middle school students.

Coach Osborne felt that the athletes in his program could make an impact on the young students, and his thoughts were a success.

Of the original 22 mentees, 21 went on to graduate from high school with 18 of those youngsters going on to pursue post-secondary education.

Since its formalization as a statewide program in 1998, it has grown to serve chapters outside the state lines of Nebraska, including Wyoming, South Dakota, Kansas and Iowa.

TeamMates of Gothenburg is always looking for more caring adults in the community to become mentors.

Contact Lynnette Stevens at 402-615-4096 or check teammates.org for more information.