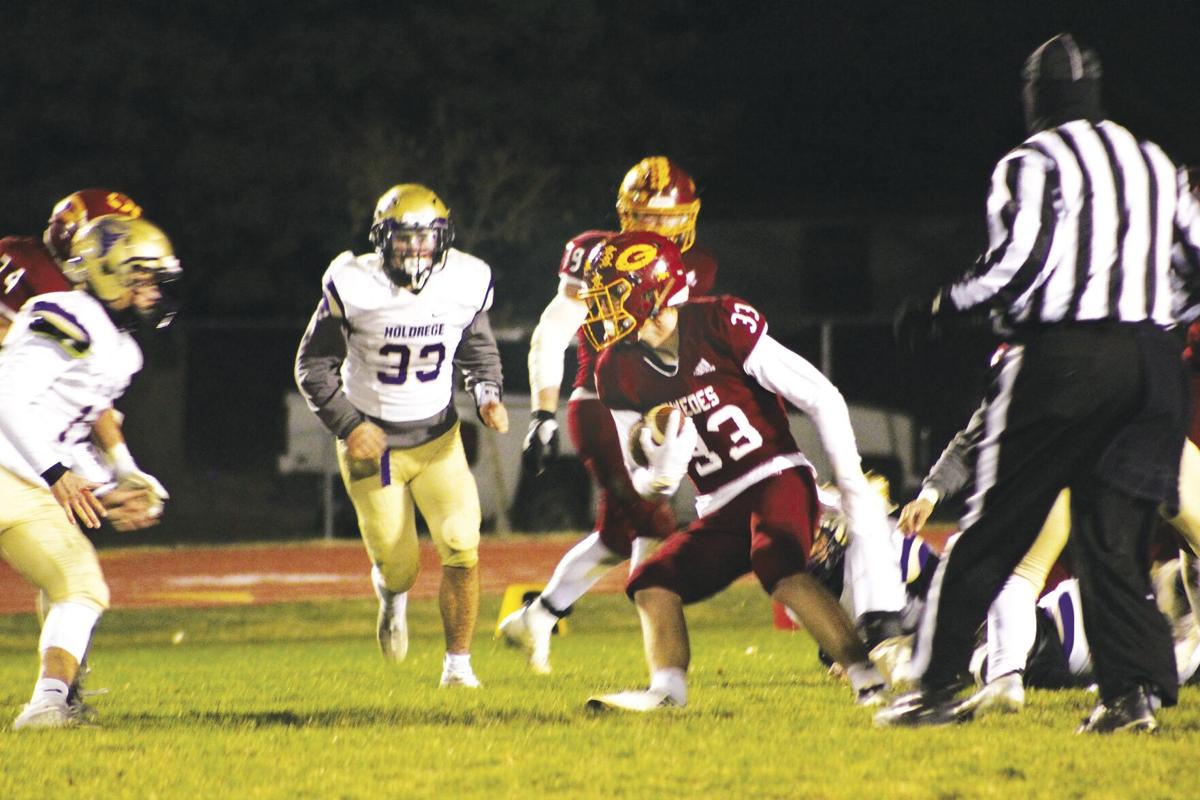 Owen Geiken spins away from a tackle attempt by a Holdrege defender. Geiken ran for 135 yards against the Dusters in the Swedes’ Oct. 23 38-20 win. 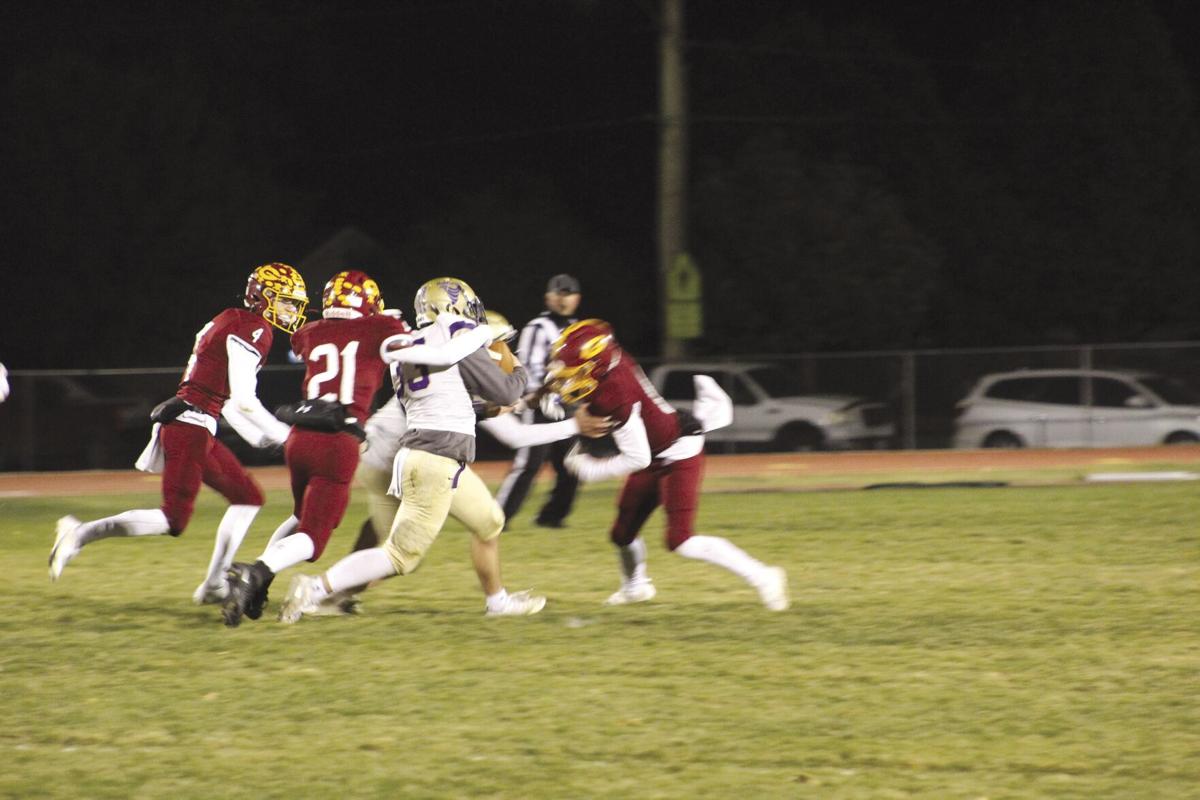 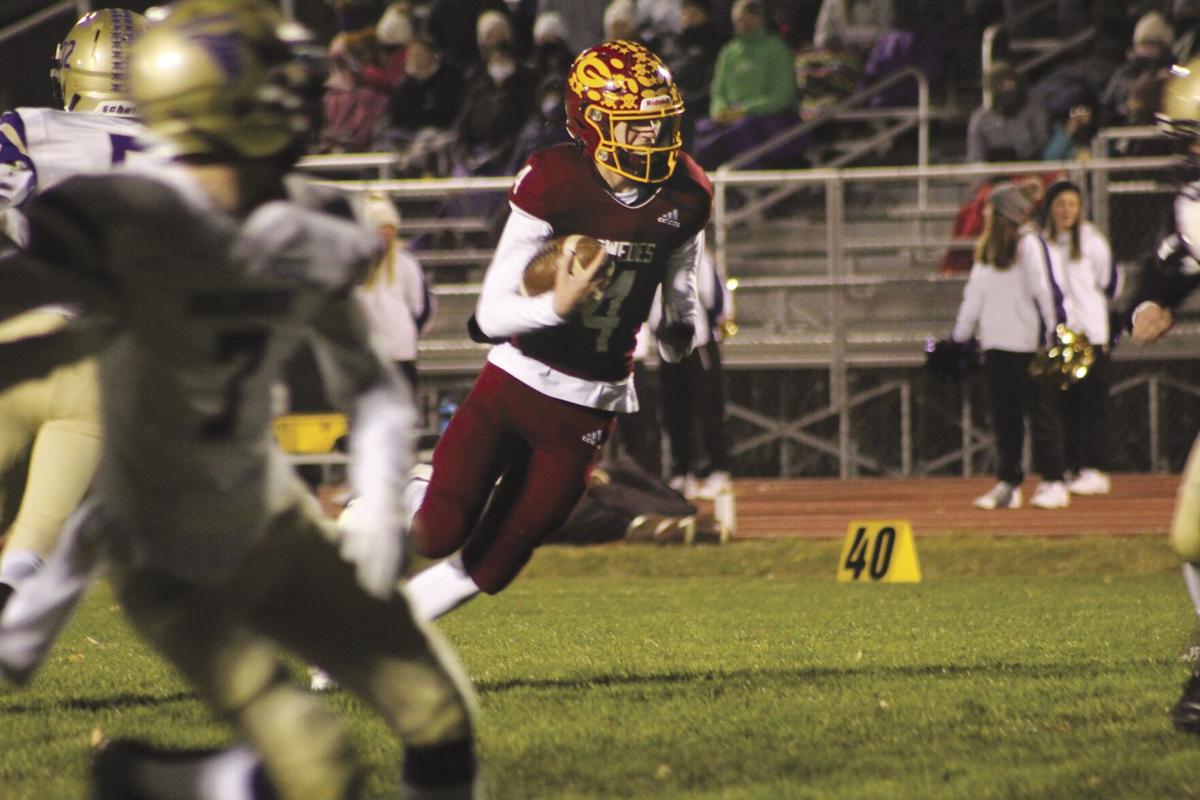 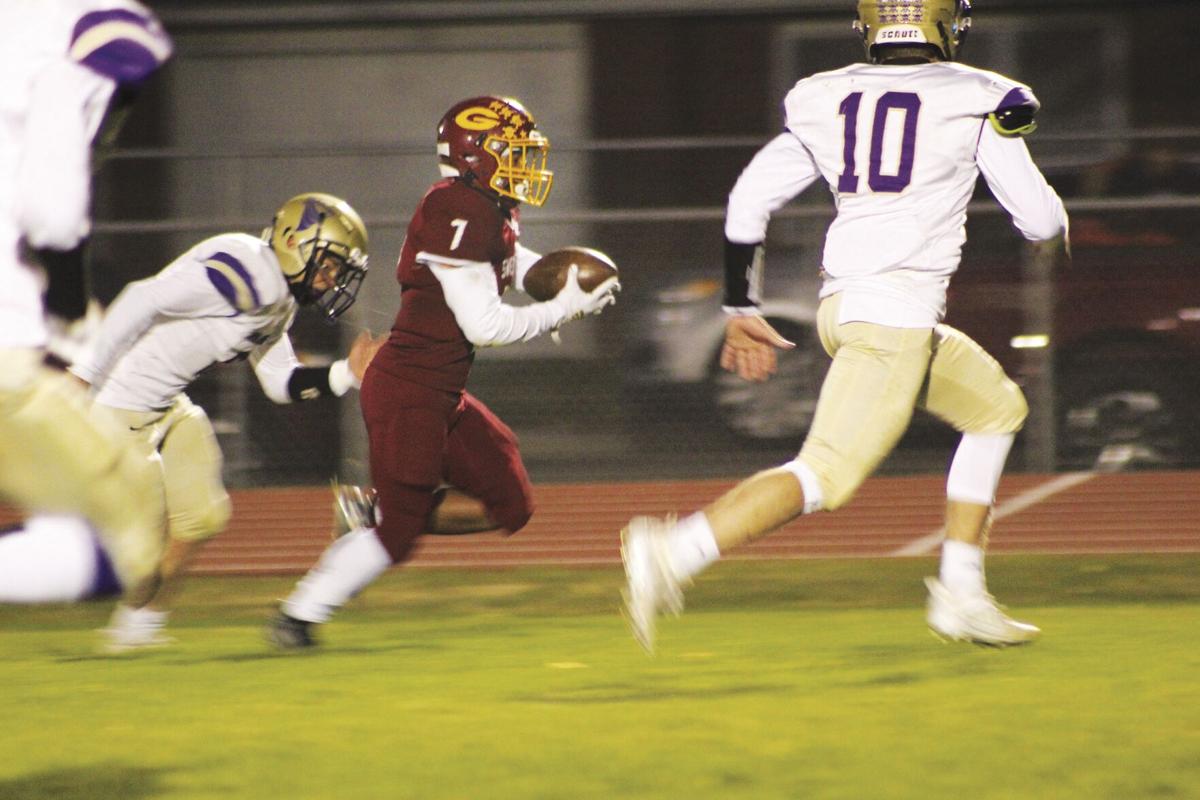 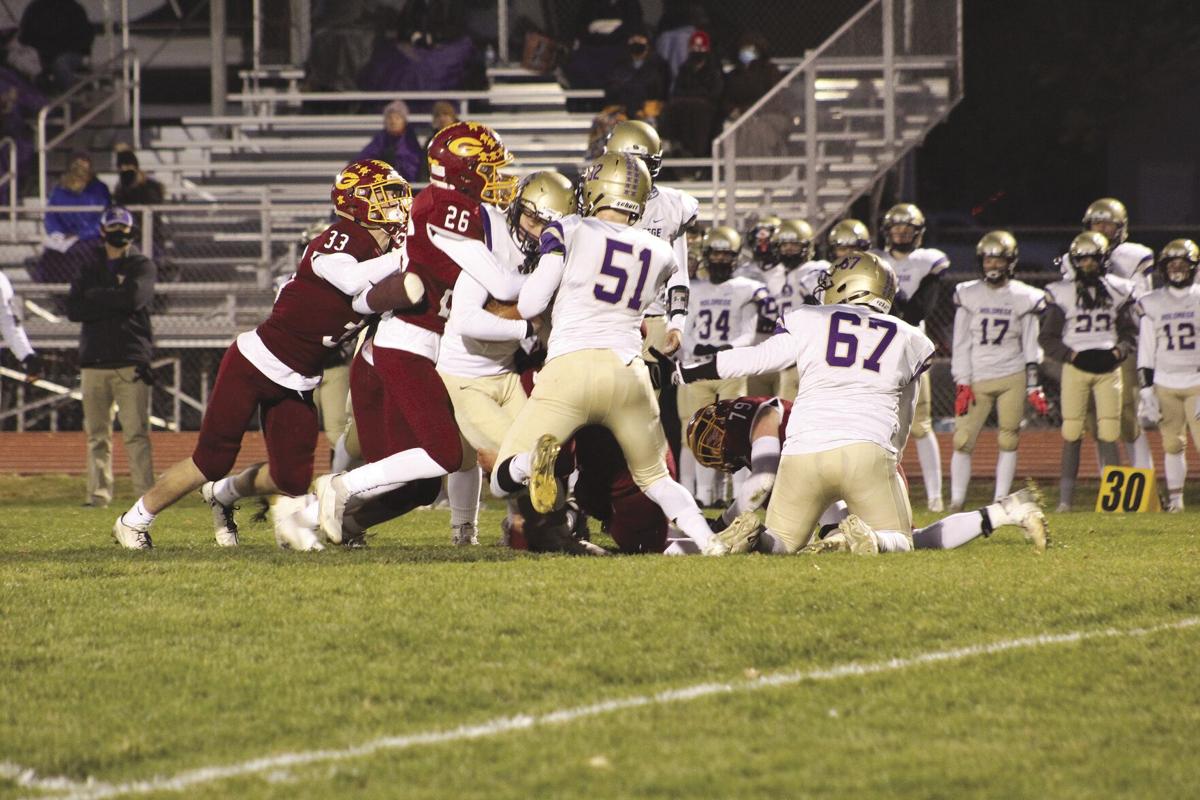 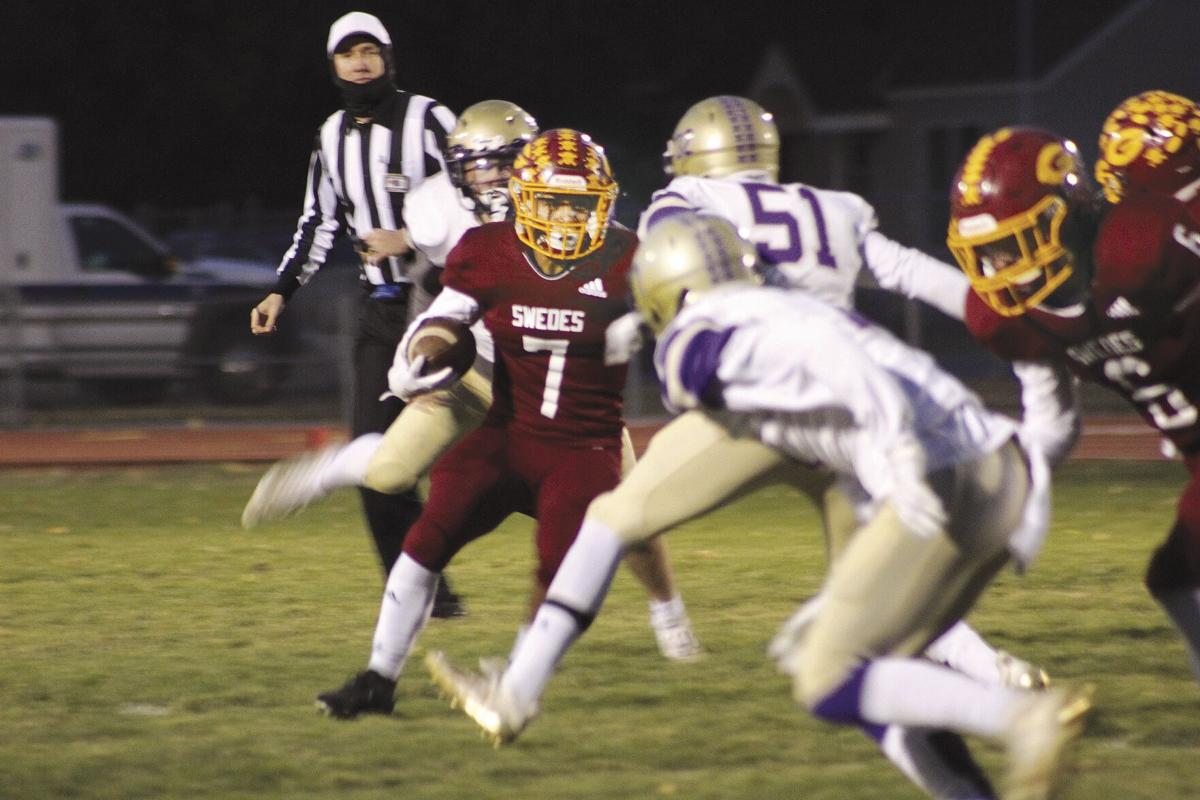 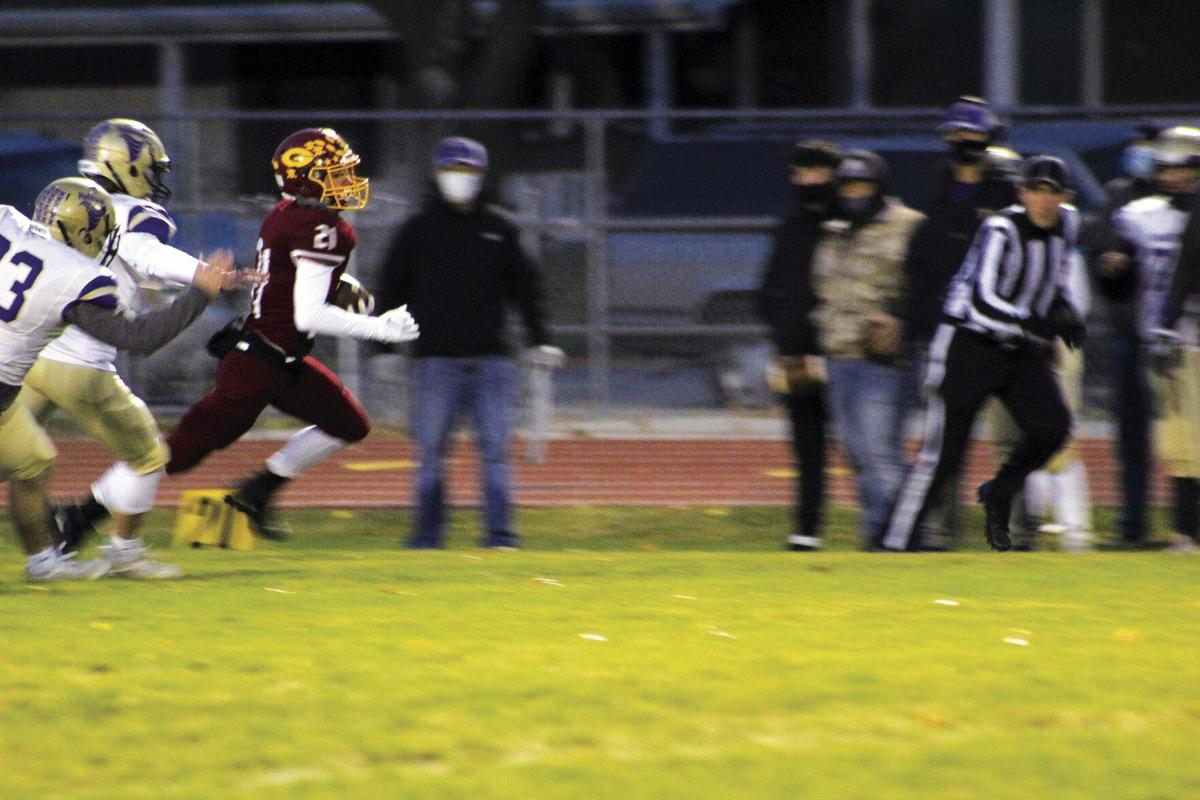 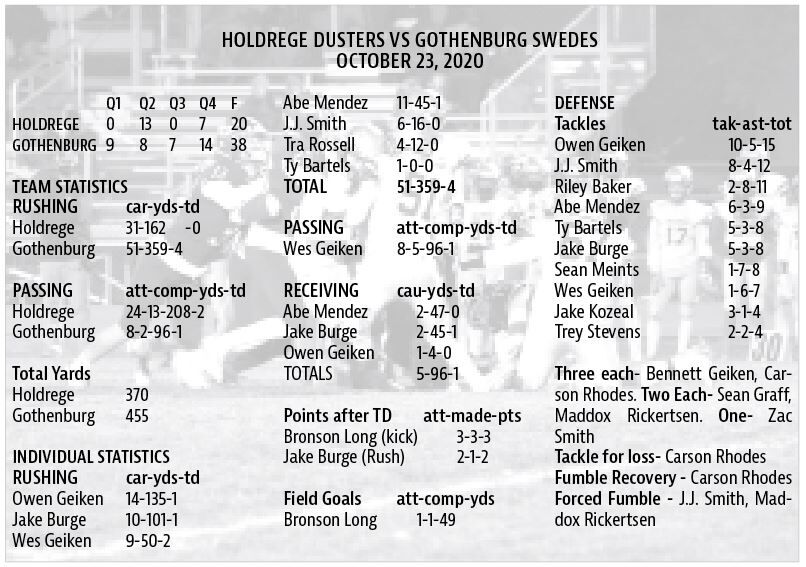 Owen Geiken spins away from a tackle attempt by a Holdrege defender. Geiken ran for 135 yards against the Dusters in the Swedes’ Oct. 23 38-20 win.

Gothenburg’s head football coach Craig Haake said last week that the Holdrege Dusters have had trouble stopping their opponent’s run games this season. The Swedes capitalized on that weakness Oct. 23, running the field for 359 yards en route to a 38-20 win, the fifth win in a row for the Swedes this season.

That doesn’t mean the game was not without adjustments.

“They played a strange defense that made us switch up our alignment on offense,” Haake said. “It took us a little bit to adjust, but once we figured it out, the kids executed well.”

The Dusters kicked off to start the game, giving the Swedes opening field position at their own 17-yard line. A pitch play to Jake Burge brought the Swedes into Duster territory before two incomplete passes brought up fourth down.

Bronson Long hit a 49-yard field goal to put the Swedes on the board early.

Holdrege got to work at their own 23-yard line.  The Swede defense held strong on the first two plays of the series and on third and seven, Holdrege attempted a quarterback keep up the middle and was stopped at the line of scrimmage forcing the Dusters to punt.

Gothenburg took the ball at their own 36-yard line and Wes Geiken marched the offense down the field.  On third and nine, Wes Geiken hit Mendez over the middle for a 34-yard gain to set the Swedes up for first down at the Dusters’ 15-yard line.

Wes Geiken took the ball on a keep and stumbled up to the 2-yard line, followed by an Owen Geiken run that didn’t pick up any yardage bringing up third and goal. Wes Geiken faked the handoff before walking in for the first touchdown of the game for the Swedes. On the PAT, Burge took a low snap and attempted to pass the ball off before being brought down outside the endzone, but the Swedes held the lead 9-0 with 2:11 left in the first quarter.

On the following offensive series for Holdrege, Sam Holt scored on a 14-yard run to make it a 9-7 game with 11:40 left in the first half.

The Swedes were unsuccessful in their next drive, being forced to punt again.

Holdrege took control of the ball and on the Holdrege drive that followed, Jackson Hinrichs hit Dashton Edgren in the endzone to give the Dusters the 13-9 edge. The 2-point conversion failed for the Dusters, leaving Holdrege with the lead with 4:20 left in the first half.

Gothenburg’s Jake Kozeal returned the Duster kickoff to their own Gothenburg 21--yard line. Owen Geiken took a handoff at the line of scrimmage and rumbled through the Holdrege line, churning until he broke loose for a 50-yard gain to give the Swedes first and 10 at the Holdrege 22.

J.J. Smith picked up four yards to bring up second down, and the line pushed through for Owen Geiken to pick up another two yards. On third and four, Owen Gieken moved the chains for another first down.

Jake Burge took the ball on a pitch play, hitting the corner and picking up another six yards to bring up second and four. Mendez took the ball up the middle to set the Swedes up for first and goal at the Duster 6-yard line.

Wes Geiken got into the endzone on a quarterback keep around the outside, giving the Swedes the 15-9 lead. Long took the field for the PAT attempt and on another bad snap, Jake Burge got around the outside and across the goal line to push the score to 17-9 in favor of the Swedes with 1:10 left in the first half.

Holdrege couldn’t do anything with the time left on the clock and the teams went to the locker room to prepare for the second half of play.

To start the second half, Gothenburg kicked off when Trey Stevens brought down Holdrege’s Brandon Carpenter at the Holdrege 26-yard line for the Swede defense to get to work.

On the first down play, the Swedes made the stop short and a holding flag pushed the Dusters back to their own 14-yard line, resetting the play for first and 22 for the Holdrege.

Holdrege moved the ball down the field on several pass plays and on the third first down of the series, Riley Baker burst through the line for a quarterback sack and a loss to bring up second and 21.

After an incomplete pass brought up second down the ball was handed off to Holt when the Swedes punched the ball loose and recovered the fumble.

A combination of hard runs by Mendez, Burge and Owen Geiken took the Swedes down to the Holdrege 6-yard line when a toss-sweep to Mendez gave the Swedes another touchdown. The PAT by Long was good, giving the Swedes a 24-13 lead with 5:13 left in the third quarter.

Holdrege took over on possession and moved the ball down the field. To open the fourth quarter, the Dusters’ Heinrichs hit Edgren on a 24-yard pass in the endzone to give the Dusters another six points. The PAT was good and the Swedes held the 24-20 lead with 11:24 left in the football game.

Ty Bartels took the kickoff to the Gothenburg 31-yard line to get the Swede offense rolling.

The Swedes took to a ground game to work down the field and on first and 10 at the Gothenburg 44, an encroachment penalty took the Swedes back five yards for first and 15.

Owen Geiken took the ball seven yards to bring up second and eight when Wes Geiken threw an incomplete pass intended for Burge.

On third and eight, Wes Geiken went over the middle with a pass intended for Bartels and a defensive pass interference play gave the Swedes a first down on the Holdrege 45-yard line.

The Swedes picked up positive yardage on runs by Mendez, Smith and Burge before Owen Geiken broke through the line for a 28-yard run into the endzone. Long was once again good on the PAT, giving Gothenburg the 31-20 edge with 7:31 left in the game.

On the ensuing kickoff, Holdrege’s Zack Carpenter fumbled the return and the Swedes’ Carson Rhodes recovered at the Dusters’ 21-yard line to give Gothenburg fantastic field position.

The Holdrege defense held on first and second down, not giving any yards to the Swedes’ churning offense. On third and 10, Wes Geiken found Jake Burge on a 21-yard pass in the endzone for the touchdown. The PAT was good and the Swedes rolled to a 38-20 lead with 5:55 left in the game.

Holdrege took the kickoff at their own 30 and worked the ball down the field, and on first and 10, Owen Geiken intercepted the football bringing the ball back to the Holdrege 21 yard line.

There was a personal foul penalty against Holdrege which gave the Swedes first and goal at the Dusters seven yard line.

A pick up of two by Burge brought up second and goal. The pitch play on second down went to Burge and resulted in a fumble that was recovered by Holdrege at the Dusters 11-yard line.

With time in the game winding down, Holdrege tried to work down the field but the Swede defense held strong, keeping the Dusters out of the endzone as the clock wound down to zero, giving the Swedes their sixth win of the season.

It was Gothenburg’s fifth win in a row as the Swedes head into the district playoffs.

The Swede offense churned for 455 yards of total offense, a feat that Haake said they would take any day of the week.

“We would take that kind of production every week,” he said. “Knowing how far we have come, its great to see the progress we have made.”

Owen Geiken had another tremendous game on the ground, tearing up the field for 135 yards rushing and hitting the endzone twice on 14 carries.

Wes Geiken was good on five of eight passes for 96 yards and a touchdown and added another 50 yards on nine carries picking up two more touchdowns on the ground.

Defensively, the Swedes gave up 371 yards and Haake said it wasn’t the best outing for the defense.

“We got gassed for some yards this time,” he said. “They do some nice things offensively. It definitely wasn’t our cleanest defensive game by far. We had some breakdowns here and there and we didn’t tackle very well.”

Haake went on to say that despite the outing, he was proud of how far the defense has come.

“To be honest, we made some big steps forward in the past five weeks,” he continued. “This defensive effort wasn’t as good as we would have liked, but we got the job done.”

The Gothenburg defense was led by Owen Geiken, who had 10 tackles and five assists. Smith added another eight tackles with four assists and forced a fumble and Baker was good for three tackles and eight assists.

Haake said he feels that the game will be pretty evenly matched.

“They like to run the ball and several of the same sets as we do, except they use a tight end,” he said. “They run a lot of option football. It’s a game that the teams should mirror each other pretty well.”

The excitement of playoff football isn’t something that Haake said he is going to let the team get caught up in, and emphasized that just being there isn’t enough.

“This is a great opportunity to go out and play another game,” he said. “We are excited to be in the playoffs, but we also don’t want the boys to just be happy to be there. We have had that feeling in the past and this year, we won’t be satisfied with just showing up. We are going to keep our nose to the grindstone and keep working.”

The Gothenburg football team will travel to Lincoln Oct. 30 to take on the Lincoln Christian School Crusaders in the first round of the Class …