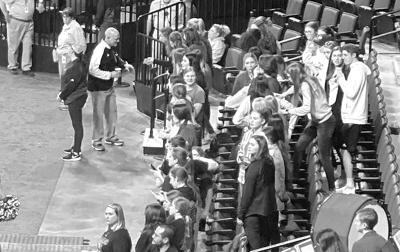 This past weekend was the Nebraska Girls’ State Basketball Tournament.

I have a lot of memories of making that trip to Lincoln, both as a spectator and as a competitor.

The atmosphere of the event is palpable.

And, theoretically, this is the best of the best who are competing for a state title.

Beyond the competition on the floor, there’s some magic in the stands that just...happens.

People come together from all corners of the state and wind up becoming fans of teams to which they have no ties.

So when a team earns their way into the tournament from the opposite end of the state, the chance of a lot of fans coming are slim.

That’s what happened with the Scottsbluff Lady Bearcats.

They took on Beatrice Friday afternoon in the tournament and understandably, the Bearcats’ student section was significantly smaller than that of their opponent who only traveled 40 miles to compete.

Taking note of the discrepancy in the support for the teams on the court, there were numerous people in the stands that took note, including Tim Strauser, his daughter Kynlee and Ellarey Harm and Emaliegh Rosse.

Tim said he was joking with the girls that they should go sit down on the floor and be a part of the absent student section.

“About that time, some of the girls that Kynlee and Ellarey play summer ball with stopped by and grabbed them and Emaliegh to come with them to be in that section,” he said. “At that same time, the Adams Central basketball team and then the Bridgeport girls that were there watching joined them all.”

Tim said that in all, five schools went to be a part of the Scottsbluff student section - Adams Central, Gothenburg, Ogallala, Chase County and Bridgeport.

Students from all over the state came together to become Bearcats for a game.

And these kids didn’t just come to that student section to clap along.

They cheered like it was their own team on the floor.

“It was great to see them be a part of that and support Western Nebraska girls that they did not even know,” Tim said. “I know I would want others to do that for my kids if the roles were reversed.”

Strauser said they did chants the whole game, and at one point, the Beatrice student section started the “We’ve got spirit, yes we do, we’ve got spirit how ‘bout you?” cheer, which went back and forth until Beatrice responded with “We can’t hear you!”.

The response from the Scottsbluff section?

There were no battle lines.

The simple loyalty was that of the true spirit of sportsmanship in showing support for a team that needed it.

The improv-student section burst out with a “We are proud of you, yes we are proud of you” cheer, only to be topped with “Thank you Seniors” as the game wrapped up and Scottsbluff finished their season.

While they may not have had their own in the stands for that last game, they had maybe the best student section of the entire tournament.

There was only a team who needed support.

And the kids delivered.

And that, my friends, is sportsmanship at it’s finest.